“Well, now … here’s something I never knew before,” begins a Facebook post copied and shared in various forms thousands of times. It supposedly describes the origin of the middle-finger hand gesture and, by implication, the insult “fuck you”.

Supposedly, both originated at the 1415 Battle of Agincourt, an important battle of the Hundred Years’ War where English troops defeated a much larger French force.

The Facebook post claims that French soldiers had planned to cut off the middle fingers of captured English archers to prevent them from drawing “the renowned English longbow”, a weapon made out of yew wood.

However, when the English won, the soldiers supposedly waved their middle fingers at the French as a reminder they could still “pluck” their yew longbows. The phrase “pluck yew” supposedly over time became corrupted to “fuck you”.

But this story is nonsense. The gesture is far older and has very different origins. And the four-letter word has much more complicated origins, but isn’t thought to be a corruption of “pluck”. 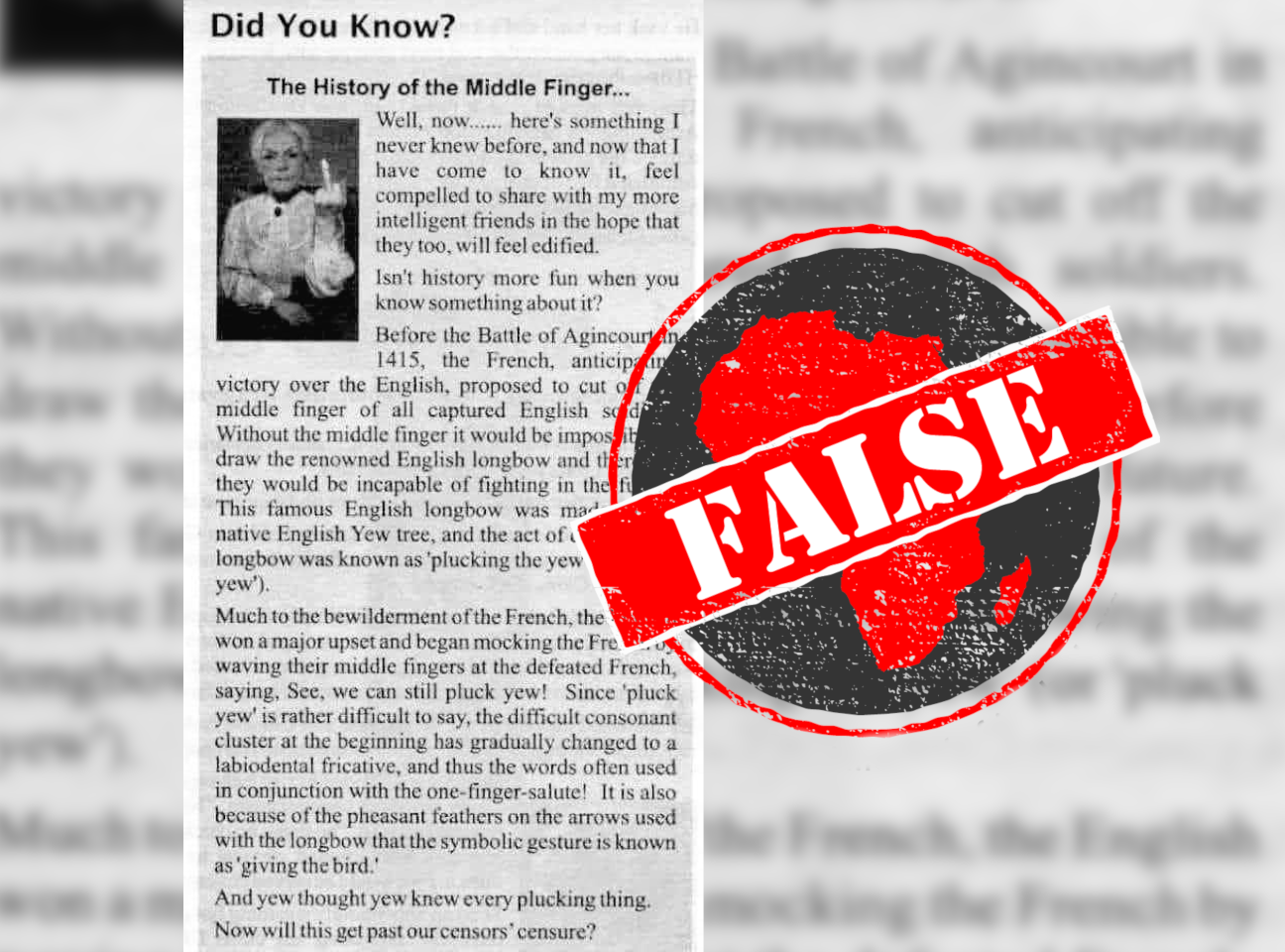 ‘One of the most ancient insult gestures known’

Anthropologist David Morris said in a 2012 BBC investigation that the middle finger is “one of the most ancient insult gestures known”.

Its use was recorded more than a thousand years before the Battle of Agincourt by the famously eccentric Greek philosopher Diogenes and in a 419 BCE play by Aristophanes.

The claim also gets its history wrong. When fact-checking website Snopes tackled it, they found that historical accounts of Agincourt made no mention of French troops cutting off the middle fingers of English captives.

The likely origin of the myth is medieval French chronicler Jean de Wavrin. In his five-volume history of England De Wavrin included an anecdote in which King Henry V of England told his troops before the Battle of Agincourt that the French had threatened to cut off three fingers from English archers.

But any definite proof of this statement is lost in the sands of time and De Wavrin makes no mention of insulting hand gestures.

The Facebook post is also wrong about the origins of the word “fuck”. Its etymology and earliest use are unclear, possibly because a taboo around saying or writing down the offensive word kept it out of written records. But there is no indication that it is a corruption of the word “pluck”.

One of the earliest uses of the word is as part of a surname recorded in several English legal documents in 1310 and 1311. Historian Paul Booth, who found the surname, believes that it was given to a man as a derogatory nickname.

But we could find no trace of a theory relating it to the English word “pluck”.