Girl in blue ‘missing’ across the USA? No, just another Facebook scam

Update (30 August 2022) – Since this report was published, Africa Check has found that the missing child message is part of a far larger and more sophisticated network of scams that appear to use hacked Facebook accounts. Read our updated fact-check here.

If you come across this missing child message on Facebook, ignore it – it’s a phishing scam.

It was posted on Facebook in August 2022 and includes a photo of a little girl. She’s lying in the back seat of a car wearing a blue onesie, seems a bit sleepy, and is drinking juice from a bottle.

The first version we came across – now deleted – had this message: “Oak cliff. Found this girl wandering behind our apartment today. I can not find her parents🥺🥺 and my neighbors are clueless how she got here, please help me find her parents good people 🙏🙏”

The message had an odd international reach. It was circulating in the USA and South Africa, and the user who posted it may be from Zimbabwe. 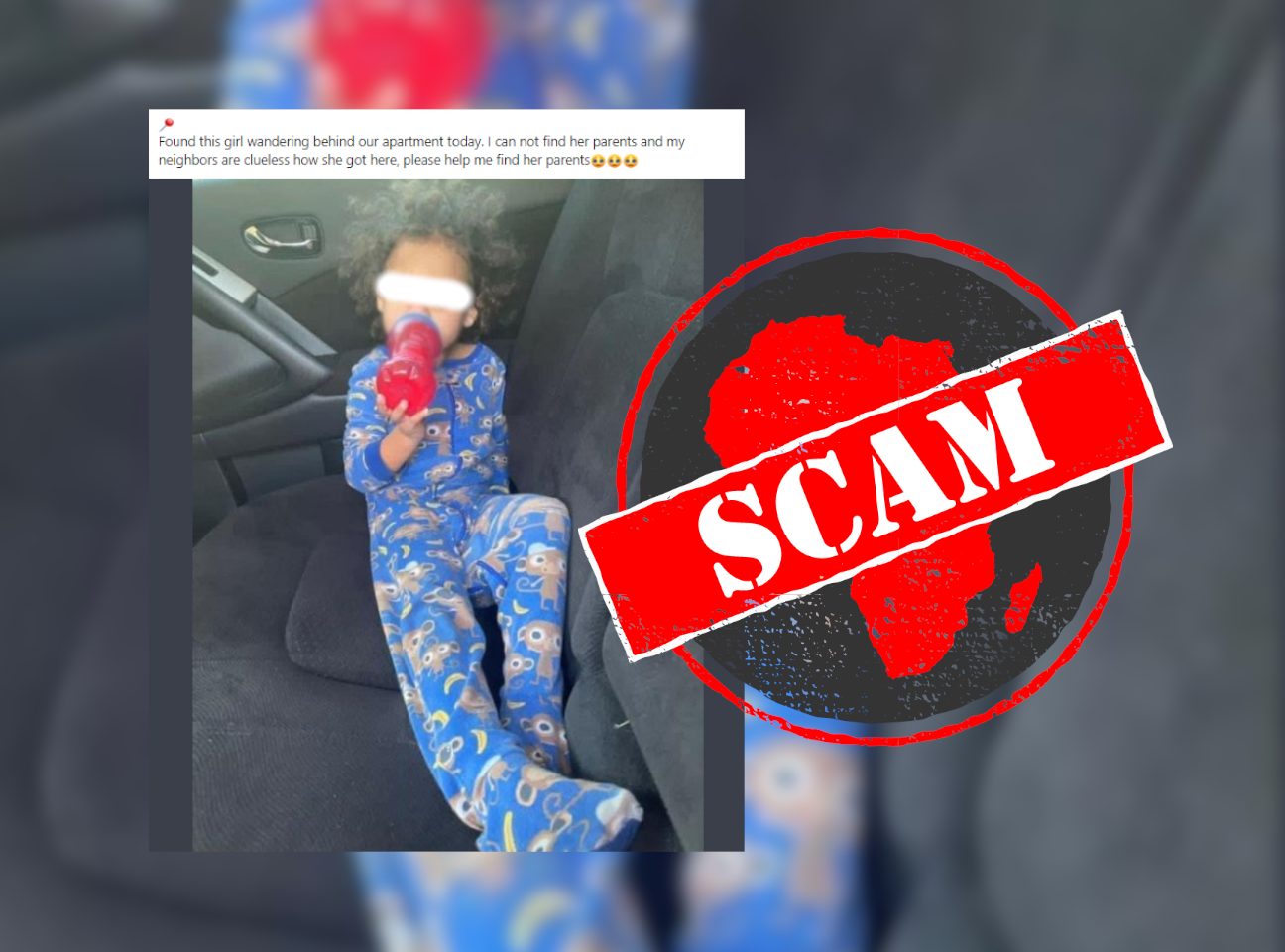 The message and photo were posted on a Facebook community page – “Oak cliff buy trade sell” – that has little information, other than its single administrator is based in Dallas, a large city in the southern US state of Texas. Oak Cliff is a suburb of Dallas.

The Facebook user who posted the message appears, from her name, friend list and education, to be originally from Zimbabwe, one of South Africa’s northern neighbours. She now lists her home as San Antonio, another Texas city.

But from what we found researching this report, it’s likely that the community page, the admin’s account and the user’s account were all hacked.

And the photo of the child has popped up elsewhere on Facebook, with claims she’s been found in different cities across the USA – all in August 2022.

‘Scammers have reached a new low’

We ran the photo through a Google reverse image search. One of the top results was a report by KY3 News, an NBC-affiliated TV station in Springfield in the midwestern US state of Missouri.

It’s dated 16 August and headlined: “On Your Side: Missing child alert scam”.

“Attention while you scroll: scammers have reached a new low,” the news anchor says. “Now, there are missing child alert schemes out there.”

The report explains that fake missing child posts encourage Facebook users who want to help to contact the scammer. In the resulting conversation, the scammer tries to get valuable personal information. They may also ask for money for, say, petrol to drive the child to the police station.

This is known as phishing.

Four screenshots of bogus Facebook posts with photos of “missing children” appear in the KY3 News report. One is the little girl in the blue onesie. They were posted on “Aurora, Marionville, Verona, Mt. Vernon, Monett, yard/garage sale listings”, a Facebook page for communities in Lawrence county just west of Springfield.

Two messages posted on the page on 23 August indicate that it has been hacked.

The bogus message about the girl in blue was posted on 21 August, two days after the post on the Dallas community group page.

Its wording is almost identical: “AURORA Found this girl wandering behind our apartment today. I can not find her parents and my neighbors are clueless how she got here, please help me find her parents.”

‘Found’ from Arkansas to California and beyond

Africa Check searched Facebook for the first couple of sentences: “Found this girl wandering behind our apartment today. I can not find her parents.”

The search results reveal that from about 8 to 21 August, scammers used the same photo to report the girl in blue as lost in cities and towns across the USA, all on local Facebook community pages.

This scam is a cynical attempt to exploit people’s concern for missing children.

To report a missing person in South Africa, go to your nearest police station as soon as you know they are missing. There is no waiting period. You can also contact Crime Stop on 08600 10111. The nonprofit Missing Children South Africa may also be able to help.