A graphic posted on Facebook on 15 September 2021 claims that men in South Africa die from suicide at a much higher rate than women.

The graphic shows a bar graph with the title: “Suicide Rates Around the World: Estimated rates of suicide per 100,000 population in selected countries in 2019.”

The bar graph appears to be a screenshot but anything identifying where it was first published has been cropped out. It is captioned: “South African men are clearly suffering in silence. What’s causing this?”

The graph shows 15 countries, including Russia, South Africa and the United States. Russia and South Africa have the highest suicide rates of the countries listed.

The suicide rates are further broken down by gender and indicate that men died from suicide at much higher rates than women in all the countries included.

For South Africa, men’s suicide rates are around 37 per 100,000 population, whereas women’s are just below 10.

The post has been viewed over 94,600 times so far. It was flagged as potentially false by Facebook’s fact-checking system.

The South African Depression and Anxiety Group sounded the alarm in September 2021 over the high rates of suicide in South Africa. They reported receiving more than 75,000 calls from suicidal South Africans since January.

But did almost four times as many South African men die by suicide in 2019 than women? We checked. 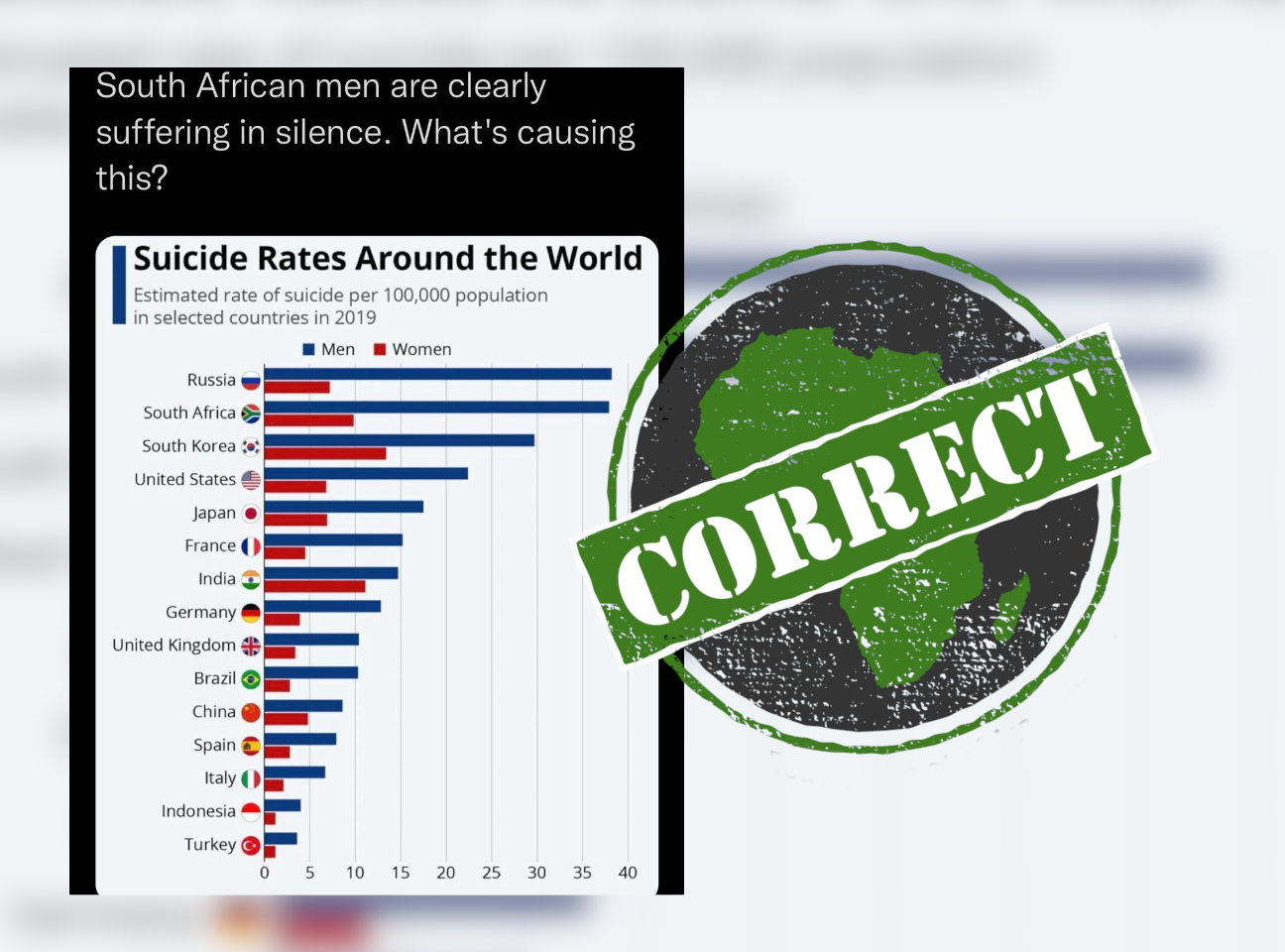 A Google search reveals that the graph is authentic. It was originally posted on global data forum Statista on 10 September 2021 for World Suicide Prevention Day.

The bottom left corner cites the World Health Organization (WHO) as the source of the data.

But the WHO cautions against drawing comparisons between countries. This is because factors such as financial and legal implications, and social stigma, may lead to suicide being underestimated in some countries.

WHO statistician Gretchen Stevens previously told Africa Check that suicide estimates may provide “useful context of how other countries with similar incomes or in the same region are doing”.

But the organisation does not provide international rankings because of the problems with the data.

The WHO published their Global Health Estimates Suicide worldwide in 2019 report on 16 June 2021. The report gives a breakdown of suicide rates per country.

South Africa recorded the third-highest suicide rate out of all African countries in the report, at 23.5 per 100,000 population.

Sadly, the graphic is accurate based on current data.