IN SHORT: A photo has been shared on social media claiming Ugandan opposition leader Bobi Wine, who has been very critical of president Yoweri Museveni and his regime and suffered for it, is endorsing Museveni’s son for the presidency. But this isn’t true, and the photo which appears to prove it has been photoshopped.

An image shared on Facebook appears to show what would be a seismic development in Ugandan politics – that opposition leader Robert Kyangulanyi, popularly known as Bobi Wine, has endorsed Gen Muhoozi Kainerugaba for the presidency.

Kainerugaba is the controversial son of Ugandan president Yoweri Museveni. Museveni has been in power since 1986 and Kainerugaba has expressed interest in succeeding his father.

Bobi Wine ran for the presidency in 2021 on a National Unity Platform party ticket but lost to Museveni. He has repeatedly accused Museveni and the ruling National Resistance Movement party of human right violations.

Wine has been arrested and detained multiple times in his political career, including on accusations of treason and annoying the president.

In the image posted on Facebook, Wine and two other men are holding a portrait of Kainerugaba, with text that reads: “MORE YEARS OF PEACE. THE NEXT LEADER.”

The image has been captioned “The Next President Of Uganda is Gen Muhoozi Kainerugaba”.

But could this endorsement be legitimate? We checked. 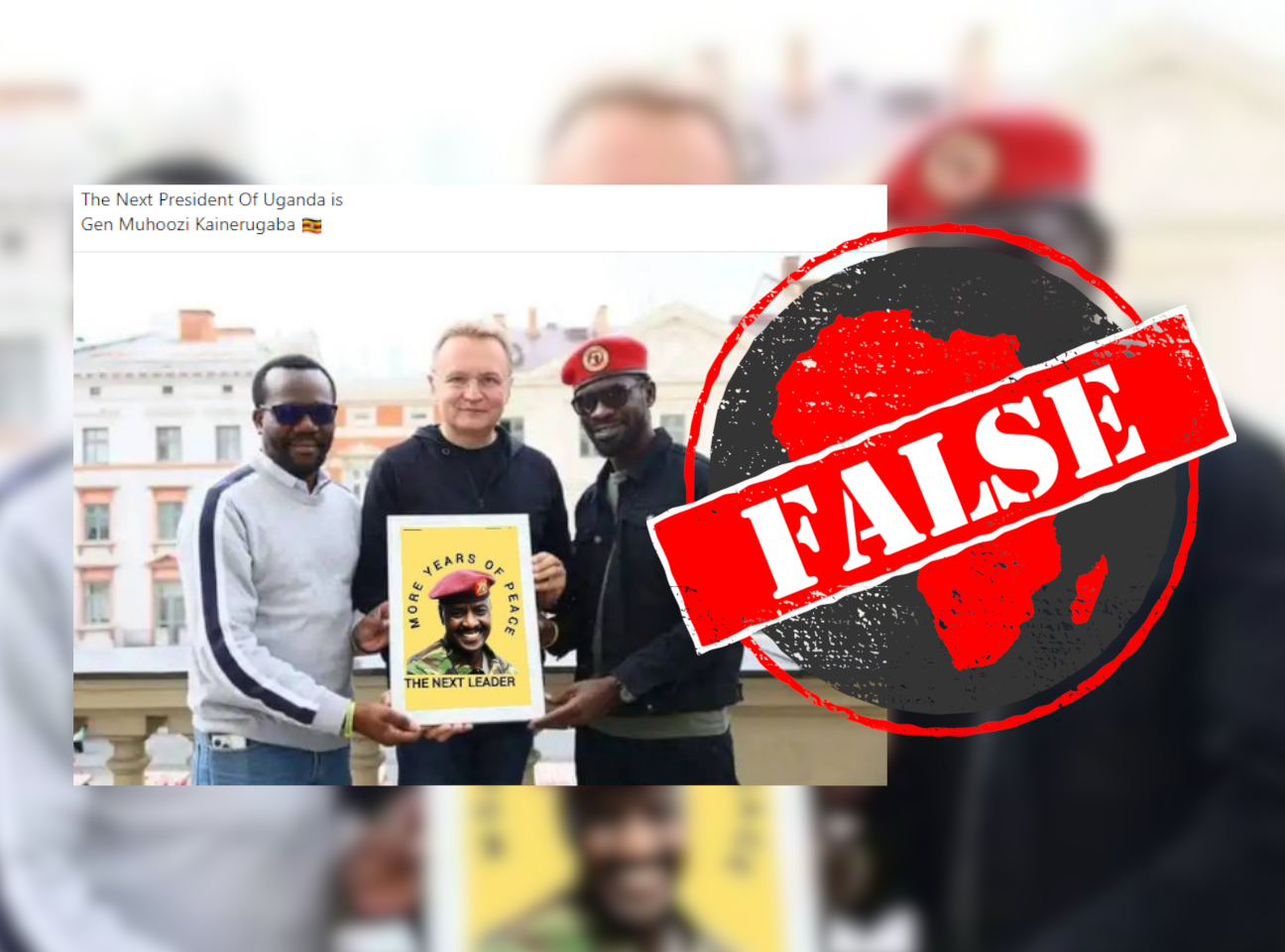 A Google reverse image search of the image revealed that Wine first posted it on Facebook on 17 September 2022.

But his caption reads: “This morning we had a good meeting with the mayor of Lviv City Andry Sadovy who has helped over 6.2 million Ukrainians go through his city to safety since the beginning of the Russian invasion in February this year.”

In the original photo, the portrait held up by the men shows former South African president Nelson Mandela.

According to a tweet posted by the Brenthurst Foundation on 28 September, the third unidentified man in the photo is Zitto Kabwe. Kabwe is the leader of Tanzania’s leading opposition party Alliance for Change and Transparency.

The Brenthurst Foundation is a South Africa based non-profit organisation, focused on Africa’s economic growth and development.

The foundation tweeted: “Following their trip to #Ukraine with The Brenthurst Foundation, @HEBobiwine and @zittokabwe compiled their thoughts into an article for @africaarguments.” The article is titled Why African democrats must support Ukraine.

The original photo does not show Bobi Wine endorsing Museveni’s son. It was digitally altered. There’s no evidence Wine has changed his political position so radically.