The news agency’s website is at africandailyvoice.com. The fake website pretends it’s the real deal by using the agency’s name and logo, but repeatedly publishes false news at afrikan-daily.com.

Now, in another story, the fake site claims that 11 people have been sentenced to life imprisonment for cannibalism in Kenya. 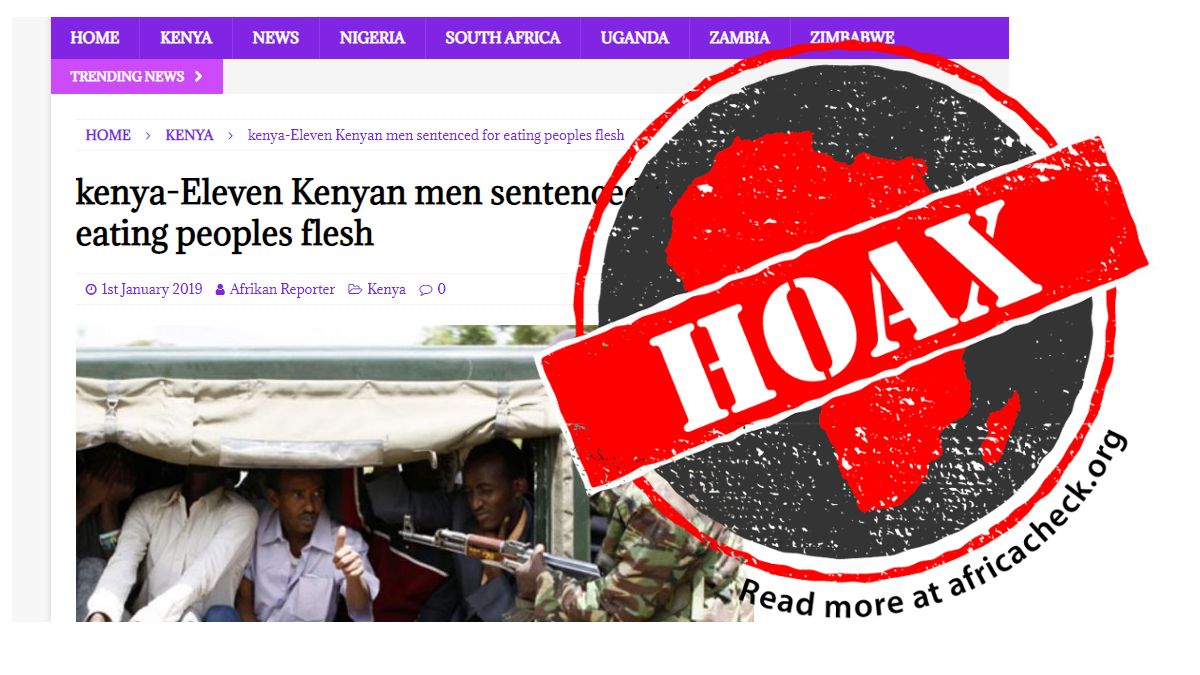 The story is that Nino Mbatha, a traditional healer, walked into a police station in 2018 carrying human limbs and told officers that he was “tired of eating human flesh”. He then allegedly took them to a house in Nairobi’s Kawangware area where more body parts were found.

There are several clues to the story’s lack of credibility. One is that it is sloppily written and littered with grammatical errors.

For example it says the crime happened in Kenya, but adds that “there is no direct law against cannibalism in South Africa”.

But also, there is no reporting in other Kenyan media of what would be a shocking story.

A Google search does show that a “Nino Mbatha”  was indeed convicted of murder, but in South Africa.

In December 2018, Mbatha and his co-accused Lungisani Magubane were found guilty of killing Zanele Hlatshwayo for her body parts. The two were sentenced to life in prison.

Seven people were initially arrested, but only the two were jailed, not 11 as claimed by the imposter site.

The story was widely reported both in South Africa and elsewhere.

Modified to suit a Kenyan audience

The fake site changed the story so people in Kenya would believe it. It said the crime took place in Nairobi. The victim was actually murdered in Estcourt, a town in South Africa’s KwaZulu-Natal province.

It also changed the victim’s name from Zanele Hlatshwayo to Zanele Otieno, a common surname in Kenya.

The rest of the story is just copied from real news reports, with no attempt to hide falsehoods.

Africa Check has flagged a number of hoaxes published by afrikan-daily.com. African Daily Voice intends to take legal action against the imposter site, according to Toussaint Alain, the news agency’s director. - Vincent Ng’ethe (07/01/2018)