A lengthy Facebook post claims that germs “do not attack living healthy bodies” and that “there is nothing to be immune to, nor any need for nor existence of an immune system”.

The post includes claims that deny germ theory, the well-established scientific theory that certain diseases are caused by germs – microscopic organisms like bacteria and viruses. This is the central belief of a conspiracy theory known as germ theory denialism.

The post, published 10 May 2022, starts “Reposting from another thread” and credits a “Peter John Ladetto”.

Africa Check published an article on 18 May fact-checking another claim that “contagion is a myth” and that germs do not cause disease. We pointed out that this claim is part of a broader set of beliefs known as “terrain theory”.

Meta’s content moderation algorithm automatically applied our fact-check to the “Peter John Ladetto” post, which mentions “the terrain model”. Eric Nepute, a chiropractor and the author of the post, contacted us to argue that this had been done in error, as his post “did not make any false claims about contagion”.

This article looks into the claims Nepute’s post makes, and tackles the false claims of terrain theory in more depth. 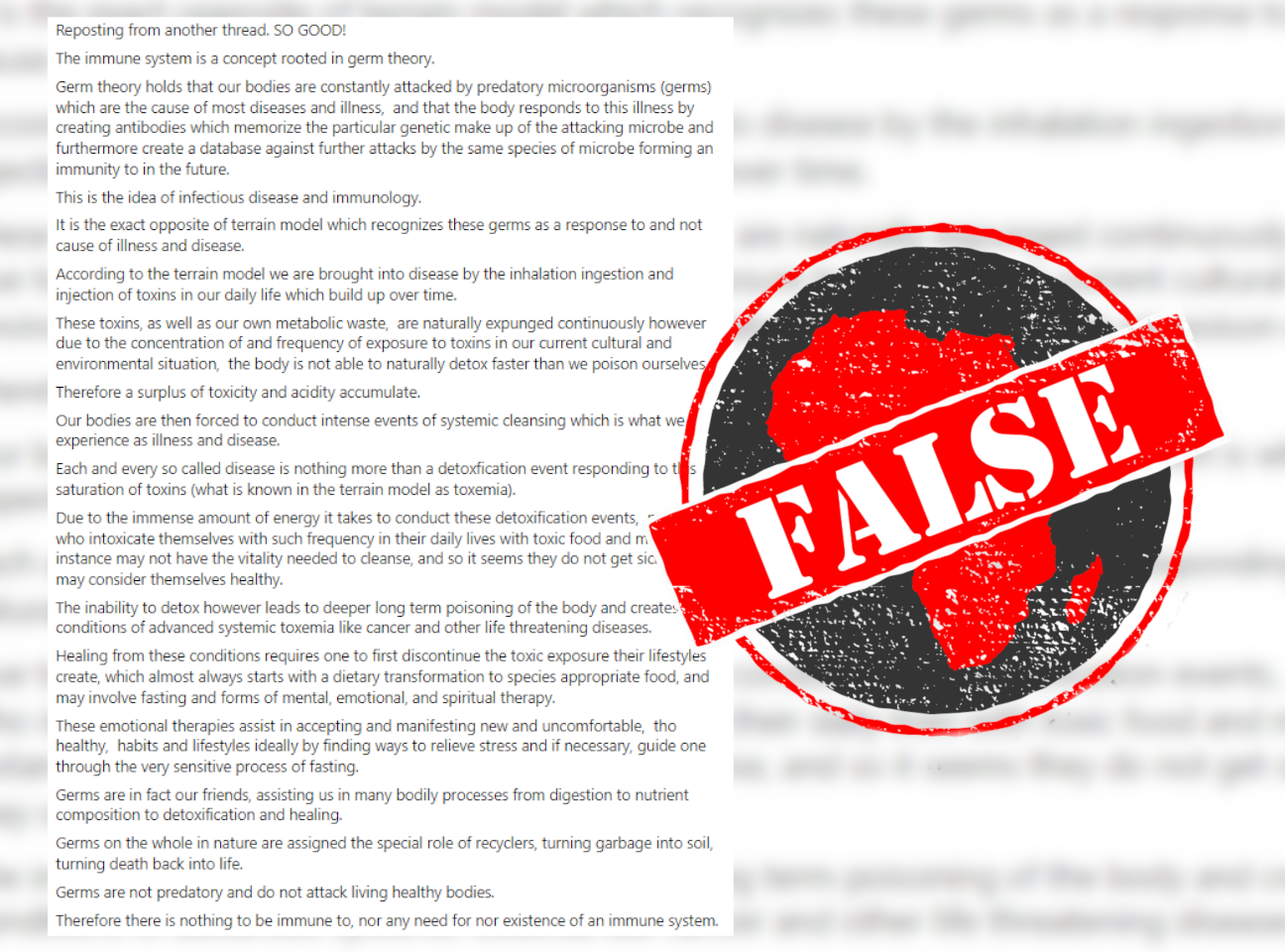 The immune system: It exists!

Africa Check could not determine who “Peter John Ladetto” was, or find a source for the quote or any of the claims in the post. But it does explicitly reference something called “terrain theory”, referred to in the post as “the terrain model”.

Modern medicine has established that many diseases – like Covid-19, tuberculosis and influenza – are caused by germs, microscopic organisms like bacteria and viruses. This model is known as germ theory and was originally developed by several medical scientists working in the 19th century, including the chemist Louis Pasteur.

The immune system is a complicated collection of bodily processes that work to prevent disease and infection. It includes large organs like the skin, which acts as a physical barrier to infection, as well as microscopic cells like white blood cells .

There is plenty of evidence that the immune system exists and that it prevents disease, from centuries of medical research to modern technologies like powerful microscopes which allow us to see the body’s immune system in action.

The biomedical engineering department of the University of California Davis in the US has uploaded several fascinating videos of the immune system at work on its YouTube channel.

This video, for example, shows a type of white blood cell called a neutrophil, responding to the cells and spores of a fungus which causes valley fever. Neutrophils surround and destroy the fungus, just as they would other germs.

The fact that the immune system exists is not disputed by medical professionals. Nepute sent Africa Check an article from the scientific journal Cell Research as justification for some of the claims in his post, but the article also treats the existence of the immune system as a matter of fact.

But let’s look into some of the post’s other claims and see if they hold up.

Some microorganisms helpful or harmless, but established fact that others cause disease

The Facebook post claims that rather than causing disease, “germs are in fact our friends, assisting us in many bodily processes from digestion to nutrient composition to detoxification and healing”.

This mirrors claims which Africa Check has previously debunked that viruses are not agents of disease but simply byproducts of the body expelling “toxins”.

This is false. Not all germs are harmful, but that doesn’t mean that none are. Let’s look at bacteria.

A 2018 paper in the European Journal of Nutrition notes that the bacteria in your gut have been shown to affect “virtually all aspects of human health”, even helping to regulate “anxiety, mood, cognition and pain”.

But not all bacteria are healthy, and one of the ways commensal gut bacteria improve health is by making it more difficult for disease-causing bacteria to invade the body.

While many types of Escherichia coli (or E coli) live in the intestine without causing disease, certain types of E coli can cause diarrhoea, vomiting, and stomach cramps outside of the intestine. Other bacteria cause diseases like tuberculosis and pneumonia.

Viruses are another form of germ. We discussed them in more detail in our previous fact-check on contagion, but in short they are simple microscopic packages of genetic material capable of infecting other organisms. They cannot replicate on their own, and must hijack other cells in order to replicate.

As we’ve said previously, there is plenty of proof that viruses exist and cause disease. Flu viruses have been photographed in the process of infecting cells, under powerful microscopes. And their RNA, their unique genetic information, has been sequenced and studied.

Germ theory has evolved over time, not been disproven

Caitjan Gainty, historian of science, technology and medicine at King’s College London, wrote in the Conversation in July 2021: “What is perhaps most troubling about germ theory denialism is not really the strength of its claims but the tenor of the debate that it inspires.”

Gainty said “traces of terrain theory underlie our contemporary obsession with the so-called ‘good’ bacteria of our digestive tract”, but that rather than disproving germ theory, these findings have been incorporated into it. “Along the way,” she wrote, “germ theory has continued to survive as a theory because it explains so much”.

Unfortunately, the Covid-19 pandemic has become an opportunity for unsubstantiated denial of germ theory to spread alongside other false claims about the disease.

Nepute told Africa Check: “We coexist with trillions of bacteria and viruses that both support our immune system as well as other daily functions of human production.”

But the paper from Cell Research that Neptune sent us as evidence of his claims notes that some bacteria are “pathogenic”, or disease-causing. It does not support claims made in the Facebook post that the immune system does not exist and that germs never cause disease. And none of his objections disprove the fact that some bacteria and viruses are responsible for diseases in humans.

In the past Nepute has been convicted of making false claims about Covid-19, and has been repeatedly debunked by other fact-checking organisations. The claims he endorses in this Facebook post are equally unsubstantiated.