Many countries facing Covid-19 ‘2nd wave’, but not all advice in viral message true

“The Covid-19 2nd wave is happening!” warns a message posted on the South African Facebook page “Public Servant PE Appreciation Squad”, which has nearly 13,000 followers. It also claims that “Nelson Mandela Bay is the hot spot in South Africa”.

PE is short for Port Elizabeth, a city that falls under the Nelson Mandela Bay municipality in South Africa’s Eastern Cape province.

The 23 November 2020 post includes a graphic that looks like it might be a screenshot of a poster released by local government or a manipulated combination of different official releases.

The post also lists several examples of countries that have announced renewed measures to combat a surge in Covid-19 infections. It claims that “the World is going back into ‘hard lockdown!’” in response to a “second wave” of Covid-19 infections. And it gives advice on how to avoid contracting or spreading the disease.

But how much of this advice would actually help prevent a second wave? And is the post correct about all the countries it claims have reimposed lockdowns? 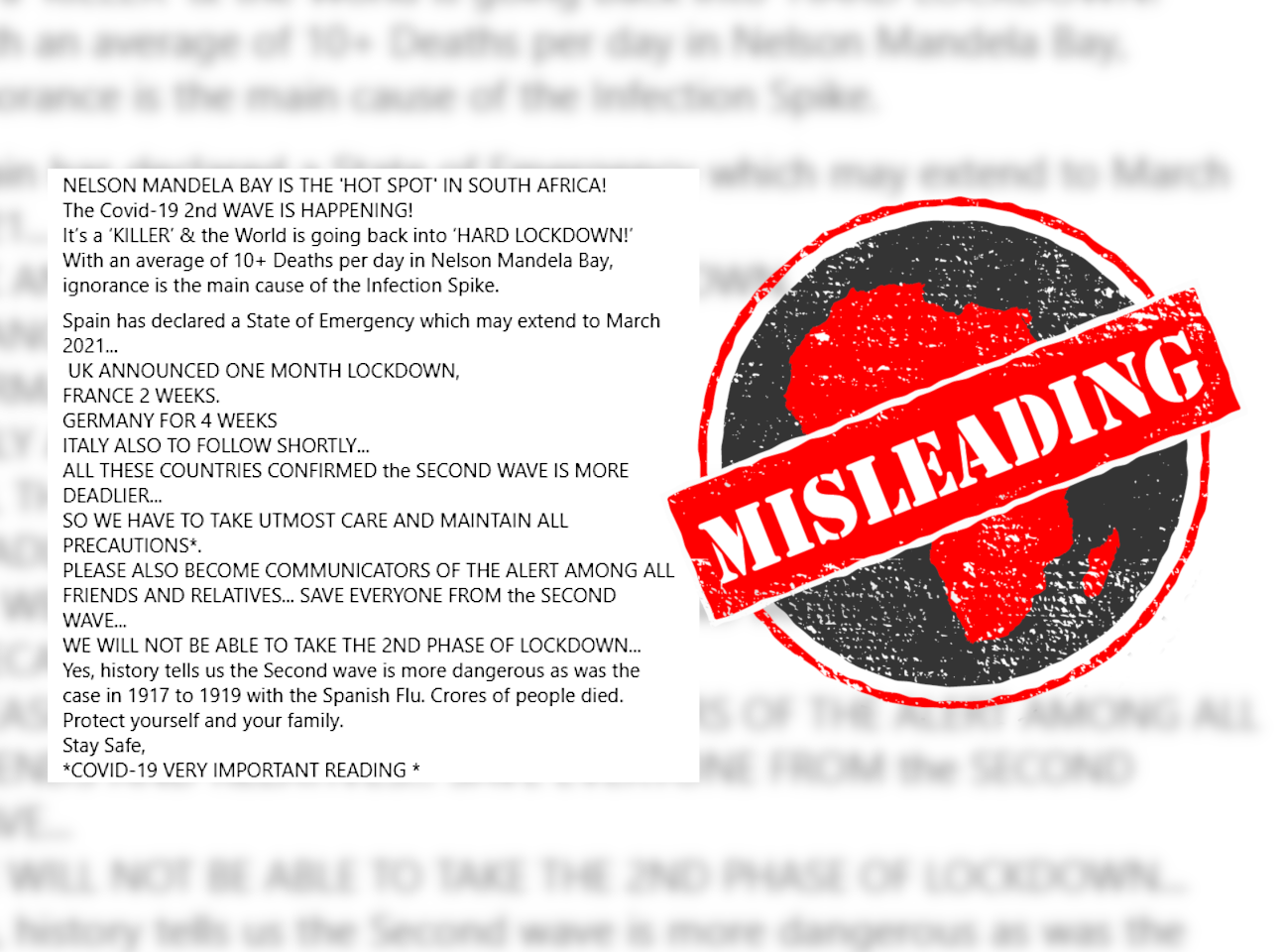 The post repeats a number of claims disproved by Africa Check and other fact-checking organisations early in the Covid-19 pandemic.

It claims “the pH of the coronavirus ranges from 5.5 to 8.5”. The pH scale measures the acidity or alkalinity of a substance, and the post suggests that transmission of Covid-19 can be prevented by eating alkaline foods.

Africa Check debunked this claim in March 2020, when Oyewale Tomori, professor of virology with the World Health Organization, or WHO, told us “coronavirus has nothing to do with the stomach” and to ignore advice about eating certain foods to prevent Covid-19.

Even basic mistakes from the March claim have been repeated word for word, like the claim that avocado has a pH of 15.6 when, as we previously reported, the pH scale ends at 14.

The virus which causes Covid-19 does not have a unique pH, and eating particular foods will not prevent transmission.

Health authorities like the WHO and the South African department of health advise wearing masks, avoiding close contact with other people, and regular hand-washing to prevent transmission.

The Facebook post also repeats other disproven claims that were widely shared earlier in the year. The false claims include:

Are the other claims made in the post about renewed lockdowns and second waves equally untrustworthy? We checked.

The post is correct to claim that many countries have reinstated lockdown measures after a second wave of Covid-19 infections. But it gets some of the finer details wrong.

The post is correct that Spain has declared a state of emergency. It is scheduled to last until May 2021, but could be lifted in March.

The post is also right that the United Kingdom has announced a one month lockdown, but so has France – not the two weeks the post says.

Italy has imposed lockdowns only in certain regions.

Germany has renewed Covid-19 measures, although “schools and nurseries are expected to remain open, as well as the majority of businesses and work places”. The country has decided against reimposing a hard lockdown.

All of these countries have been prompted to renew lockdowns or other measures after seeing a rise in the number of Covid-19 cases.

South African health officials have warned of the possibility that the country will face its own “second wave”. The Nelson Mandela Bay municipality has been identified as one of a number of hotspots.

The municipality’s communications office issued a statement on 10 November noting that the area “has been highlighted as the new Covid-19 epicentre in the country”. South African president Cyril Ramaphosa also noted that Nelson Mandela Bay and one other area were responsible for “massive spikes” in case numbers in the Eastern Cape.

The Facebook post’s information about renewed lockdowns is correct but its claims about how to prevent transmission of Covid-19 are false. – Keegan Leech