Is the term “monkey wrench” racist because it’s the name given to tool invented by a black man – legendary US boxer Jack Johnson? That’s the claim in a meme shared on Facebook in Kenya.

It reads: “On February 3, 1903 Jack Johnson became the first ‘negro’ heavy weight title champion. But, did you know he was also an inventor? While in Jail in Kansas, he invented the wrench! In 1922 he received a patent for his invention. In fact, white people still found a way to tarnish this great accomplishment by dubbing it the ‘monkey wrench’. A term many use freely today. Do the math!” 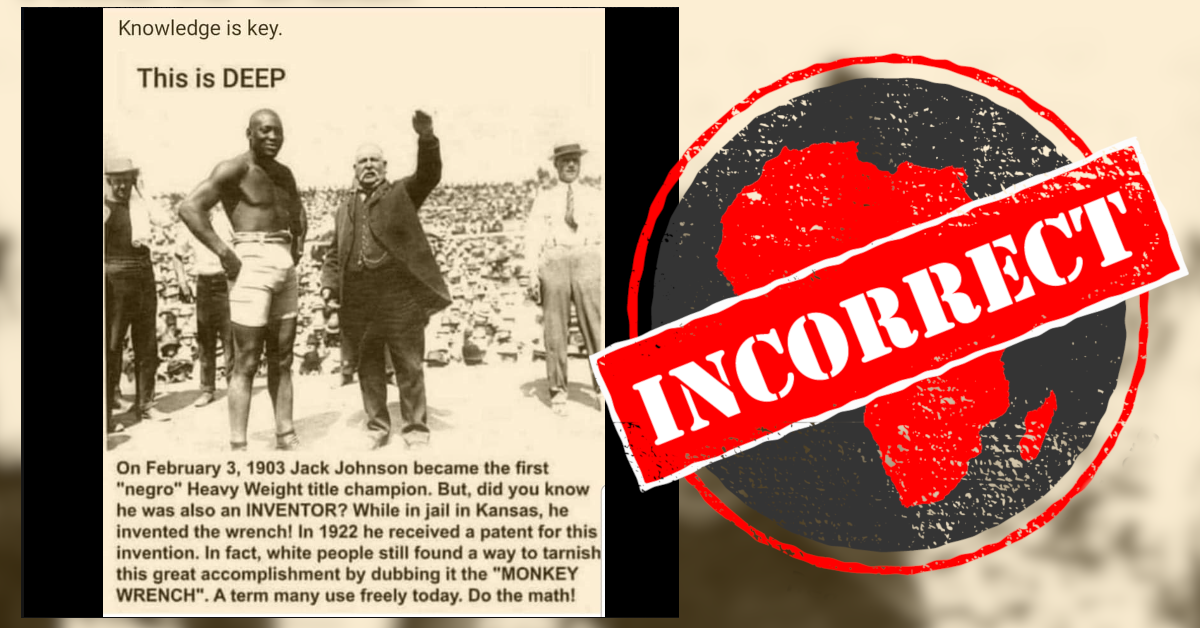 
The website ToolPowers explains that a monkey wrench is a “wrench with two straight metal jaws” that can be moved up and down by twisting a screw mechanism. This means it can be used on bolts of almost any size.

The term “monkey wrench”, it says, simply means it’s a wrench ready for immediate use.

The Online Etymology Dictionary of word origins says “monkey wrench” has been used as the name of an “old style of wrench with a jaw adjustable by a screw mechanism on the handle” since the 1800s.

“Monkey was used in the 19th century, especially by sailors, as a modifier for various types of small equipment made for specific work (monkey-block, monkey-boat, monkey-spar, etc.), and the same notion probably is behind the name of the tool,” the dictionary says.


The confusion may come from the fact that Johnson – full name John Arthur Johnson – did invent an adjustable wrench, in 1922. His five-page patent (#1,413,121) is available on the US Patent and Trademark Office website.

But Johnson wasn’t the first to invent an adjustable wrench. They have been patented in the US since 1835.

The wrench wasn’t Johnson’s only invention. According to Truth or Fiction, he was also awarded two patents for a “theft-preventing device for vehicles.” This blocked the fuel supply when an unauthorised person tried to use the car.

Johnson was unfairly imprisoned, as the Facebook meme suggests. He was convicted in 1913 on trumped-up charges related to his relationships with white women.

Johnson died in 1946. In 2018, he was given a posthumous pardon for his baseless conviction.