New Twitter owner Musk plans to restore accounts of all banned users – except Trump? No, screenshot fake and claim false

IN SHORT: The screenshot seems to be of a New York Times article. But there’s no evidence Elon Musk said he “just doesn’t like” US ex-president Donald Trump, or that he plans to restore all banned accounts, but not Trump’s.

“Elon Musk States Intention to Restore Every Banned Twitter Account, ‘Except For Donald Trump’,” reads the headline on what seems to be a screenshot of an article by the New York Times, a famous newspaper based in the USA.

Text below quotes Musk: “It may seem petty but I just don’t like him.”

The screenshot started doing the rounds on Facebook in South Africa and elsewhere – and on Twitter – in late October 2022. It appeared soon after Musk bought Twitter for US$44 billion (about R790 billion on the day) on 27 October.

Musk was born and raised in South Africa. The billionaire owns the electric car company Tesla, the space rocket company SpaceX, and the brain chip company Neuralink. He is said to be the richest person in the world. 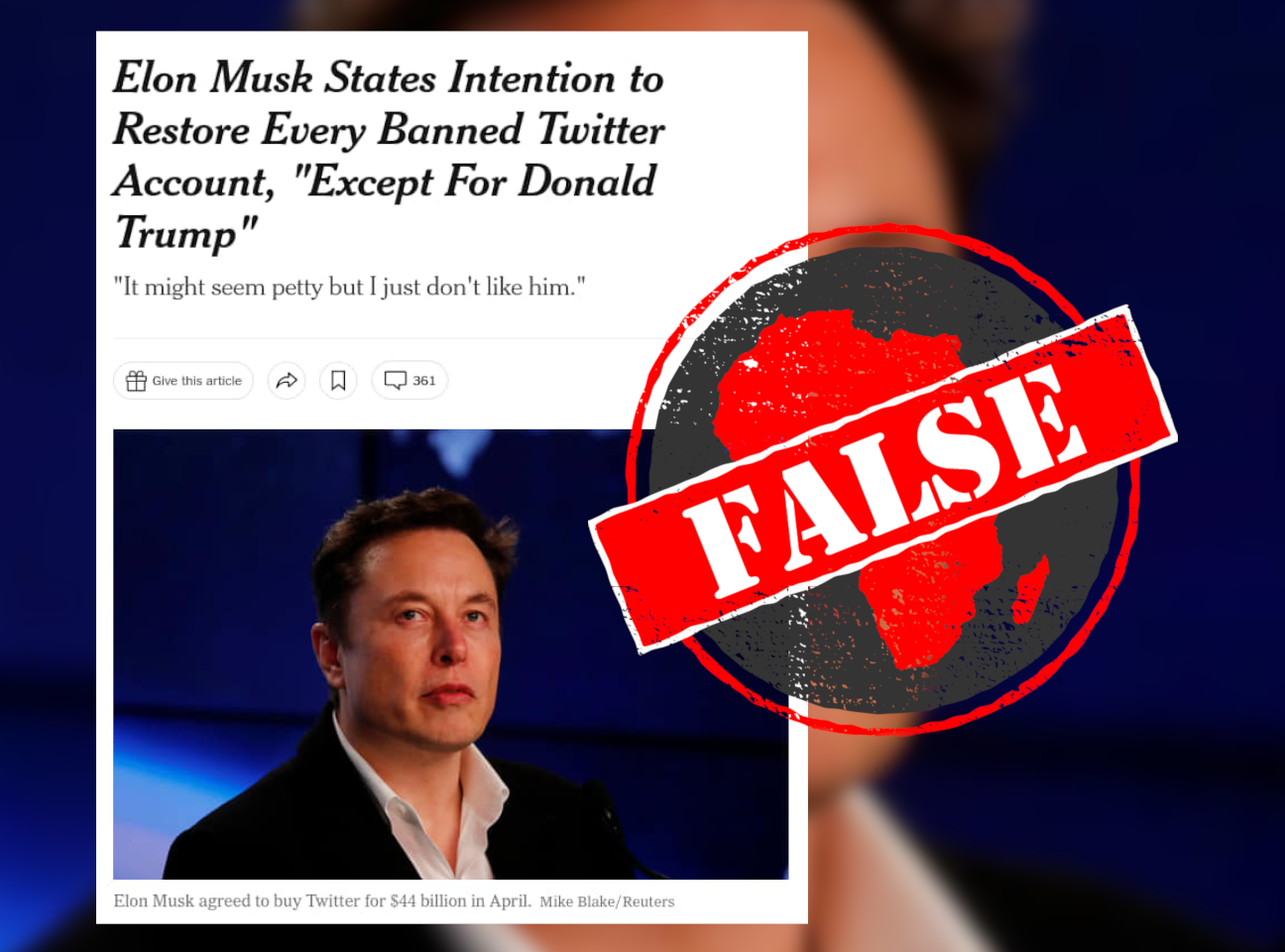 An attack, Trump’s Twitter ban and the free speech debate

Trump was an enthusiastic Twitter user with almost 90 million followers. But he was permanently banned from the platform on 8 January 2021 for posting tweets that went against Twitter’s “glorification of violence policy”.

The ban came two days after thousands of Trump’s supporters attacked the US capitol, the country’s lawmaking building, on 6 January 2021. The attackers were trying to stop Biden’s confirmation as president. Several people died as a result.

But Trump tweeted what seemed to be praise for the attackers. This led to his permanent suspension from Twitter.

Musk has said that he is a “free speech absolutist”. In March 2022, he tweeted: “Given that Twitter serves as the de facto public town square, failing to adhere to free speech principles fundamentally undermines democracy.”

Others argue that unlimited free speech could lead to harm, like the harm listed in the Twitter Rules.

International law and the laws of many countries, including South Africa, support the right to free speech – but as a limited right. The right doesn’t, for example, allow propaganda for war, incitement to violence, and the promotion of racial and other hatred.

But has Twitter’s new owner really said he intends to restore every banned account, except for Trump’s? Did he add that this was simply because he didn’t like Trump? And did the New York Times report that Musk said it?

Musk’s takeover of Twitter has dominated global headlines in the few weeks since he bought the company. Trump has also been in world news in the upcome to, and with the outcome of, the USA’s midterm elections on 8 November 2022.

But none of the many recent news reports on either man supports the claim.

And the article in the screenshot can’t be found on the New York Times website. Africa Check searched for the headline using the New York Times’s internal search engine and found nothing. A Google search of the website also came up empty.

We then searched Musk’s Twitter account. Again, nothing. And Trump, who often responds loudly to criticism, hasn’t said a word about it.

In May, Musk publicly said at a major conference that he would restore Trump’s Twitter account if his deal to buy the company was completed. Before the US midterms, Musk came out in support of Trump’s Republican Party.

And Twitter has recently banned users who parodied the accounts of Musk and other prominent people, and of multinational companies.

The screenshot is fake and the claim is false.