It shows two photos, side by side. The first photo, labelled “2009”, is of a young man in sandals standing next to a wheelbarrow piled with what looks like cut sugarcane.

The second photo, labelled “2019”, is of an older man in football kit, kneeling in what appears to be a stadium. He has a gold medal around his neck and is holding a trophy.

It looks like he is wearing the official shirt of France’s 2018/19 football team.

The photos were posted with this comment: “Respect to naby kante. 2009 – from garbage collector. 2018 – To world cup winner.” 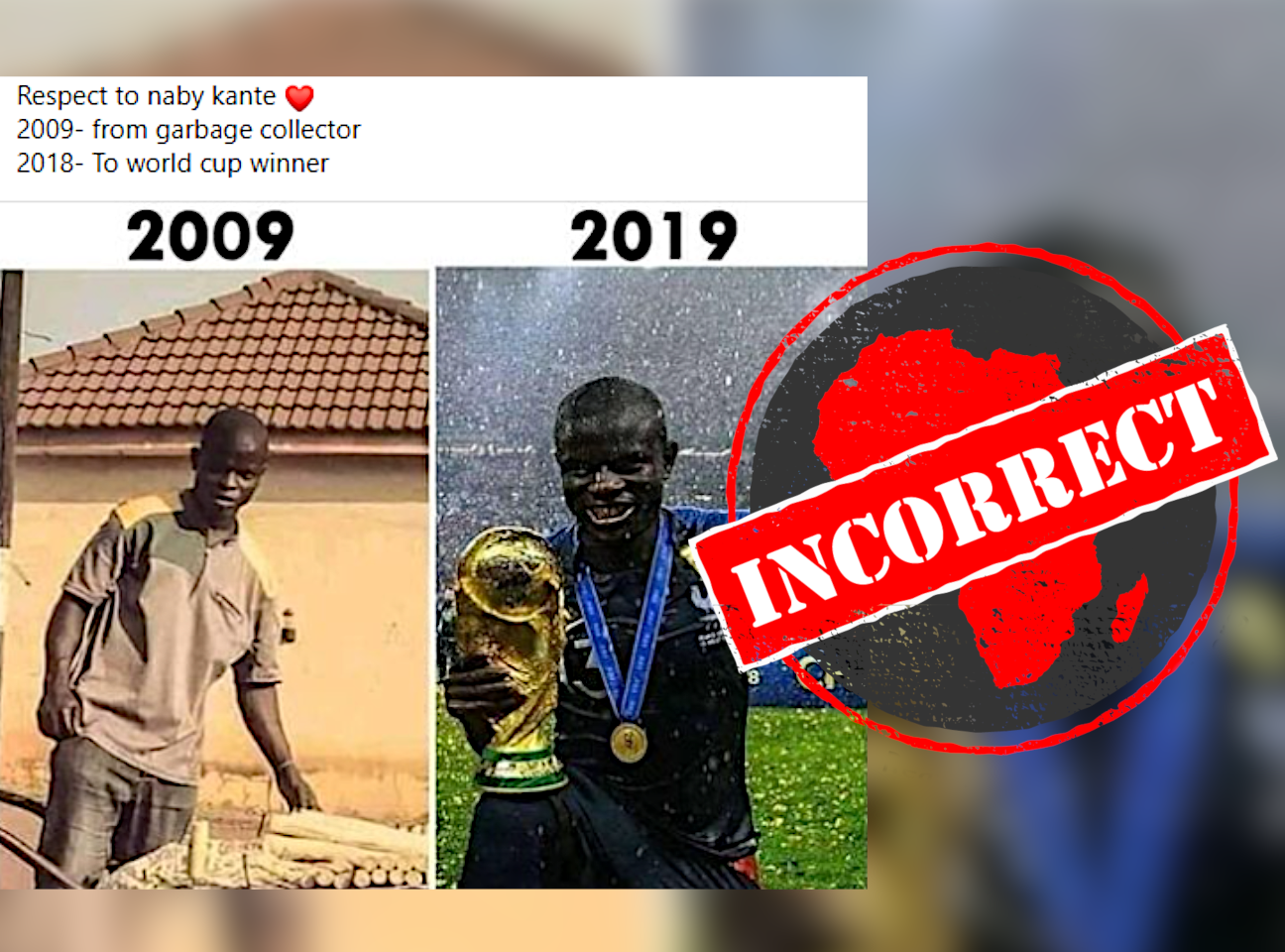 The Fifa world cup is a competition between the national teams of countries belonging to the Fédération Internationale de Football Association, football’s global governing body.

It’s held every four years. Russia hosted the cup in 2018, and the next event is scheduled for Qatar in 2022.

Keïta is a Guinea-born footballer who currently plays for the UK’s Liverpool Premier League club. He’s also part of the Guinean national team. But Guinea has never qualified for the Fifa world cup – and the second photo is not of Keïta.

Instead, it shows N'Golo Kanté, a French footballer who plays for the UK’s Chelsea club. He’s been a member of France’s national team since 2016 and was in the French squad that won the 2018 world cup.

The photo of Kanté celebrating the victory, holding up the Fifa world cup, has been widely published. But is the first photo, of a young man with a wheelbarrow, also of him?

From rags to riches?

According to his biography on the Chelsea FC website, Kanté played for his local amateur side in Suresnes, in the western suburbs of Paris, until the age of 19, in 2012. He has played club football since then, and was scouted by the French national team in March 2016.

The comparison between the two photos has been widely shared online since at least 2019, with some saying Kanté sold sugarcane when young, others repeating that he was a garbage collector, and more others saying the claims were fake.

The story that he picked rubbish as a child in Parisian suburbs has been widely repeated. But we could find no evidence of Kanté ever confirming it.

There is also no evidence that the youngster in the photo is Kanté. It is unlikely that the photo was taken in France, where sugarcane tends not to be hawked on the streets. Kanté’s parents were from Mali, but he was born and grew up in Paris.

But whether both photos are of N’Golo Kanté or not, and however meteoric his rise to football glory has been, the graphic has no basis in fact. There is no evidence that the footballer went from collecting garbage to winning the world cup.

No, Orlando Pirates hasn’t fired player after arrest for rape of 12-year-old

South African footballer Ekstein resigns from Kaizer Chiefs – again – after manager Middendorp calls him a monkey? No, it’s another fake