No, 50,000 restaurants in Italy didn’t open in protest against Covid-restrictions – and restrictions still in place

“In Italy 50,000 restaurants decided to open at the exact same time. No masks, no bullshit,” begins a screenshot of a Facebook message, reposted on Facebook on 25 January 2021.

“The government has given up within 24 hours - and officially removed all sanctions.”

It ends by claiming that this proves “this bullshit” will only end “when people stop tolerating it”.

The post has been viewed 12.7 million times so far, in the US and South Africa.

In January, Italy extended its state of emergency to April in response to worsening Covid-19 infection rates. At the time, the country had recorded 2.3 million cases and 79,819 deaths.

This led to restrictions on regional and international travel, and the closure of restaurants and bars except for takeaways.

But did 50,000 Italian restaurants open in protest against the restrictions? And did the government respond by removing all sanctions within 24 hours? We checked. 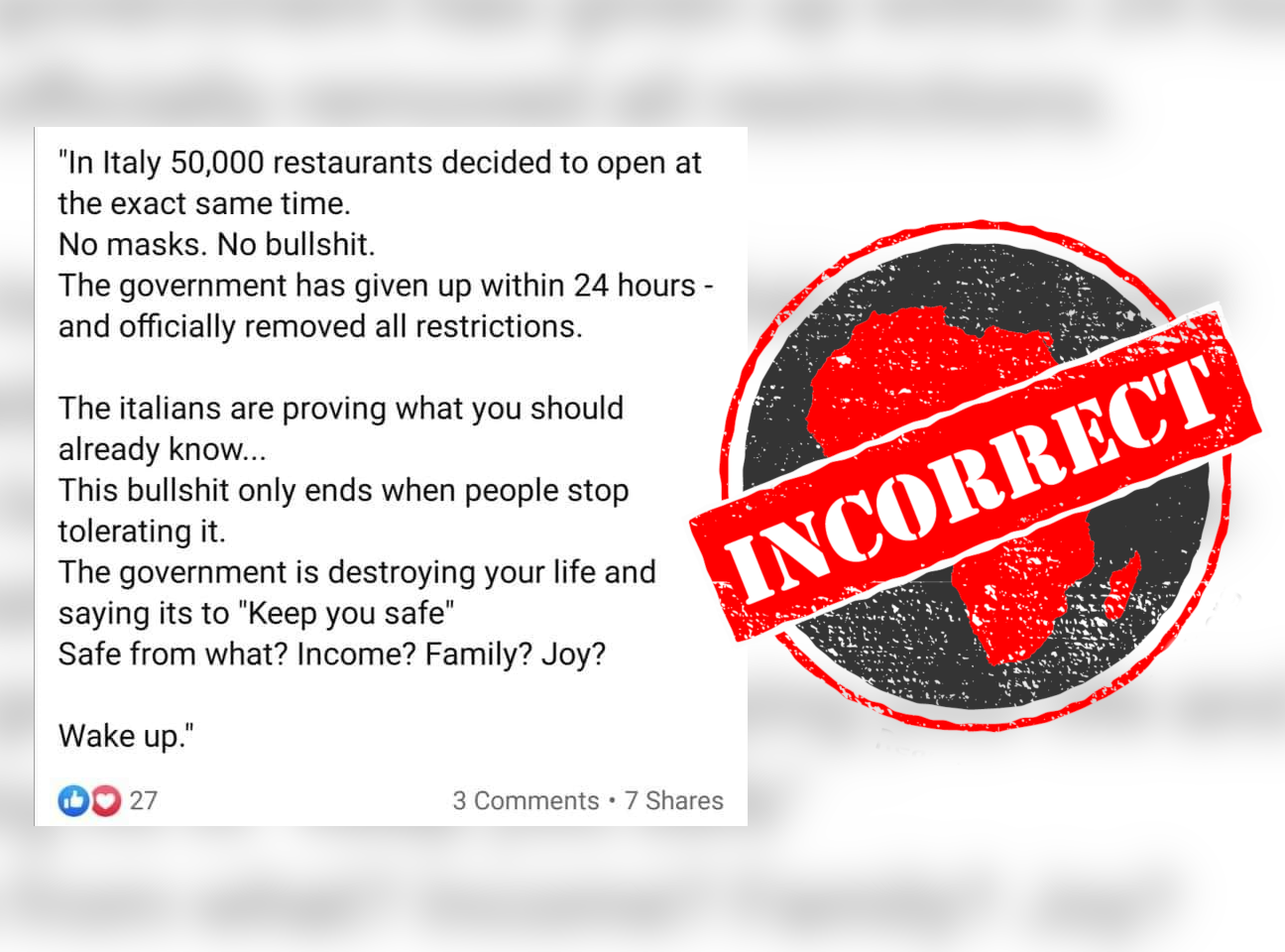 Italian news outlet Italia Informa reported on 14 January that 50,000 people had joined the Facebook page “IOAPRO1501”, part of an online campaign calling for restaurant owners to open their doors in defiance of restrictions.

The campaign called for others to join the protest on 15 January using the hashtag #IoApro, which translates to “I Open”.

Euronews reported on 16 January that some restaurants took part in the protest and opened their doors to customers. A video by the outlet shows that restaurant workers continued to wear masks during the protest.

But local news outlets said the protest was largely unsuccessful. Both Leggo and L’Union Sardia called the protest a “flop” and reported that a few dozen restaurants and bars scattered across the country reopened. In the city of Foggia about 50 restaurants, bars, and pizzerias opened their doors.

Restrictions in place across country

The restrictions Italy introduced in January have four tiers, with “red areas” being regions with the highest level of risk and most severe restrictions and “white areas” having no restrictions.

According to the Italian government’s website, the tiered restrictions will be in place from 16 January until 5 March.

Italy’s restaurant protest involved far fewer than 50,000 establishments. And the Covid-19 restrictions are still in place across the country.