The quote, attributed to a “Melusi Ndlalambi Mzilankata”, continues: “I remember reading and watching a few videos on how people who drew up maps during the colonial era purposely made Africa look smaller than the other continents when in actual fact it's the biggest …”

The post includes a map of Africa, Europe, Asia and Oceania. There are straight red lines drawn from west to east, at a slight angle, across  the continents of Africa and Asia. The line across Africa is labelled 7,200 kilometres, and that across Asia set at 6,400 kilometres.

At its end, the quote claims that showing Africa smaller on maps than other continents “was and still is a psychological way of programming Africans to think that the Europeans, Americans and Asians were superior”.

Popular world maps have been criticised for shrinking Africa while exaggerating the size of other continents. In one article by CNN, “the typical world map” is called “wildly misleading”.

Is Africa really the biggest continent? And did people who drew up maps in the colonial era purposely make Africa look smaller? We checked. 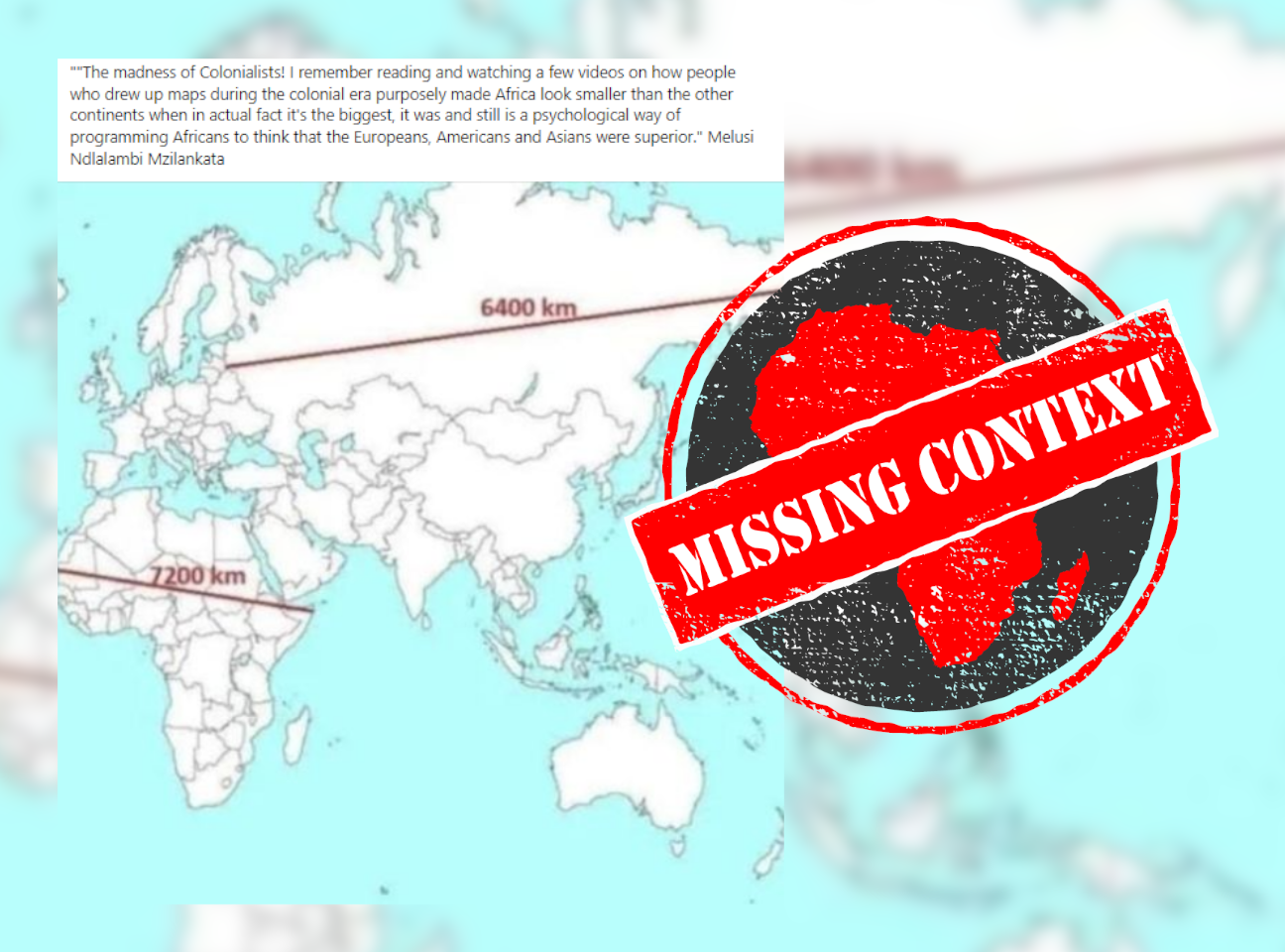 A Google search reveals that the numbers in the graphic don’t add up.

Africa is approximately 30,221,532 square kilometres (km²) and makes up 12.7% of Earth’s land. Its horizontal width is 7,009 kilometres  measured from Dakar, Senegal to Mogadishu, Somalia.

This makes Asia the largest continent. The distances on the graphic are wrong.

The Mercator projection is a commonly used two-dimensional map of the world. It was created by Gerardus Mercator in 1569 to help sailors navigate the world. He was from Flanders, now a part of Belgium.

Africa was largely colonised by European powers in the late 19th century, although European countries had contact with African societies centuries before and the transatlantic slave trade began in the 16th century.

Flattening the earth into a two dimensional image creates distortions. The Mercator projection has been criticised for exaggerating the size of countries near the poles while shrinking countries closer to the equator. For example, Greenland appears to be about the same size of Africa when in reality Africa is 14 times larger.

Critics have argued that this misleading portrayal of Africa’s size has political implications which influence our perception of the continent. But Mercator did this to preserve the shape of countries at the expense of accurately depicting their size.

Africa is not the largest continent in the world. However, popular world maps like the Mercator projection do make the continent appear smaller in relation to the rest of the world than it actually is.