No, AstraZeneca vaccine not made year before Covid-19 emerged

“Ok so it’s Covid 19 but the vaccines were made a year before ‘discovering’ it. I keep smelling shit but my shoe soles are clean,” reads text in an image shared over 12,000 times on Facebook.

The South African sharing the image has replied to this in Afrikaans in their caption: “Ruik julle dit ook? Dit is beslis nie my skoensole nie.” This means: “Do you smell it too? It’s definitely not the soles of my shoes.”

The image appears to be a screenshot of a Facebook post with a Polish caption, which shows the packaging of an AstraZeneca Covid-19 vaccine. A pink arrow points to the date “2018.07.15” stamped on the box.

AstraZeneca, Pfizer and Johnson & Johnson Covid-19 vaccines have received approval from the South African Health Products Regulatory Authority, or Sahpra, for use in South Africa.

Initially the South African government decided not to use the AstraZeneca vaccine as it was believed to be less effective against the Beta variant of Covid-19, at the time spreading in the country.

On 30 July 2021 deputy health minister Joe Phaahla said the government was re-considering its use as new research showed it was more than 70% effective against the by then more dominant Delta variant.

Does this image shared on social media prove that the AstraZeneca Covid-19 vaccine was in fact manufactured in 2018? We checked. 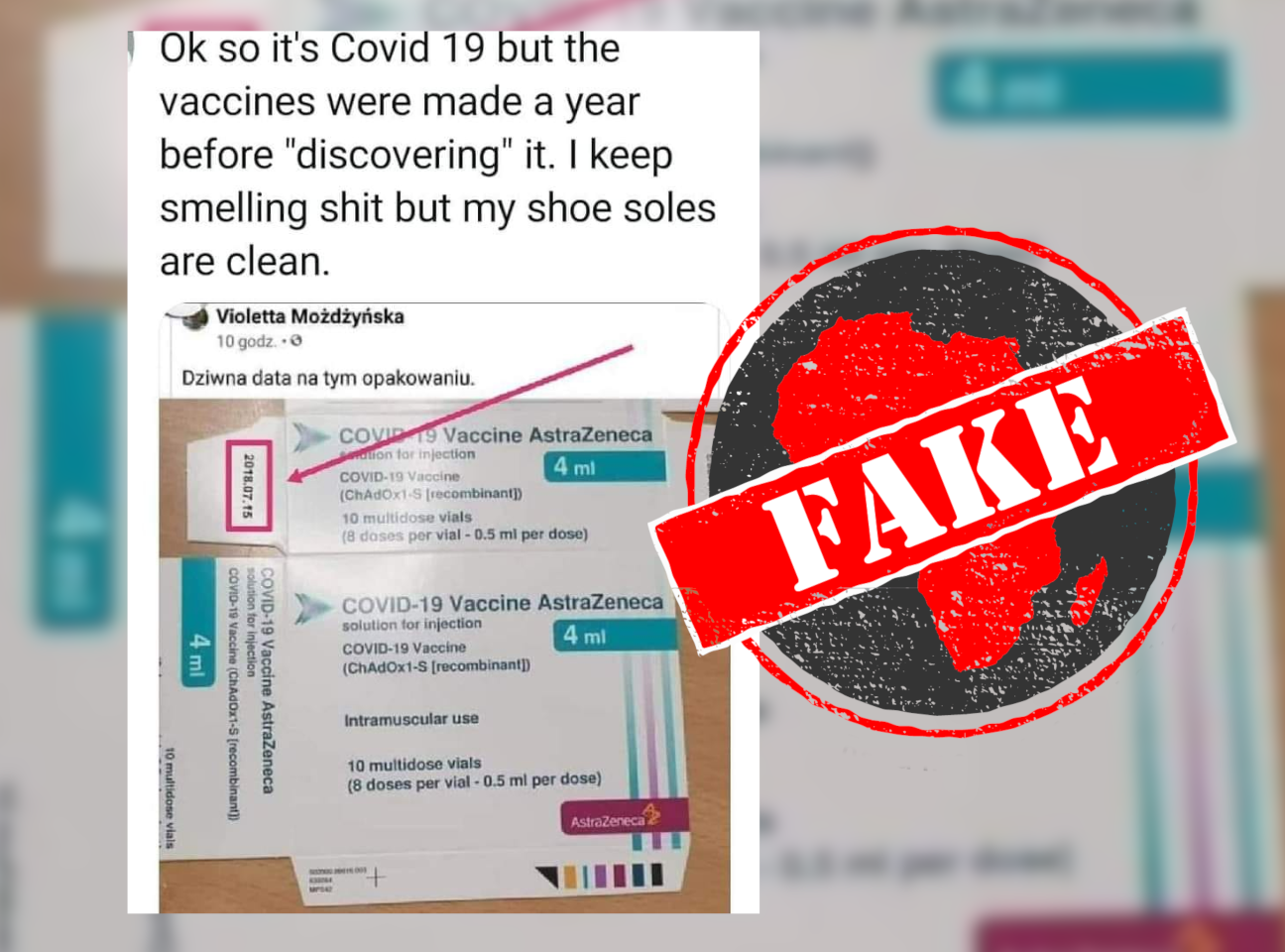 Date was photoshopped onto the image

“Die foto lyk vir my na ‘n swak photoshop edit,” was one person’s comment on the image. In Afrikaans this means: “This photo looks like a poor photoshop edit to me.”

They pointed out that the text of the date stamp is darker and clearer than the text on the right tag of the packaging. And this social media user has done their debunking homework.

We found the original photo, shared on Facebook on 12 November 2020, almost eight months before the date-stamped version was shared.

The image is exactly the same, even down to the number 108438/3 printed on the box. The only difference is that it does not have the poorly photoshopped date stamp.

The original photo was shared with a claim that according to “an employee working in a company producing packaging for drugs” the ordering and production of vaccine packaging began “at least four months ago”.

“So the production of packaging with the composition of the vaccine started before the announcement that the vaccine had already been invented,” the claim said.

On 26 October 2020, AstraZeneca announced that “its experimental Covid-19 vaccine produced an immune response in both young and old adults”. News agency Reuters said this could be the announcement the earlier post referred to.

Because the AstraZeneca vaccine was first delivered to human volunteers almost seven months before the post, “reference to packaging orders being placed more than four months ago does not provide evidence that the company had prior warning of the pandemic”.

Catalent provides packaging for the AstraZeneca vaccine. Chris Halling, the director of global communications and marketing at Catalent, told Reuters they don’t usually start production of packaging for unapproved drugs.

But because of the need to get vaccines out quickly, they worked with their customers “to be able to quickly supply huge volumes of doses should their Covid-19 vaccine or therapy prove successful in clinical trials”.

There is nothing suspicious about this image, not the original and not the digitally manipulated version.