No, chimps aren’t our ancestors. Wrongheaded old illustration still being used against accepted theory of evolution

It’s a famous image. Six naked males walk from left to right, the first on its knuckles, the last upright. It’s based on a confused idea of evolution. And it’s often wrongly used in arguments against evolution.

The first figure looks like a chimpanzee. The next four walk on two feet, with gradually improving posture. At the front is a bearded man.

“If The Theory Of Evolution Were True.” That’s the header of a graphic using a version of the image. The graphic has been circulating online for at least a decade. It can be seen on Facebook here, here, here and here.

Text below a bracket indicating the four central figures asks: “So where are the millions of these? (The Between Species).”

The graphic suggests that the theory of evolution says people evolved from chimpanzees, and that while chimps exist today, the missing links between them and us no longer exist.

But no evolutionary biologist believes that. And the graphic misleads in other ways. 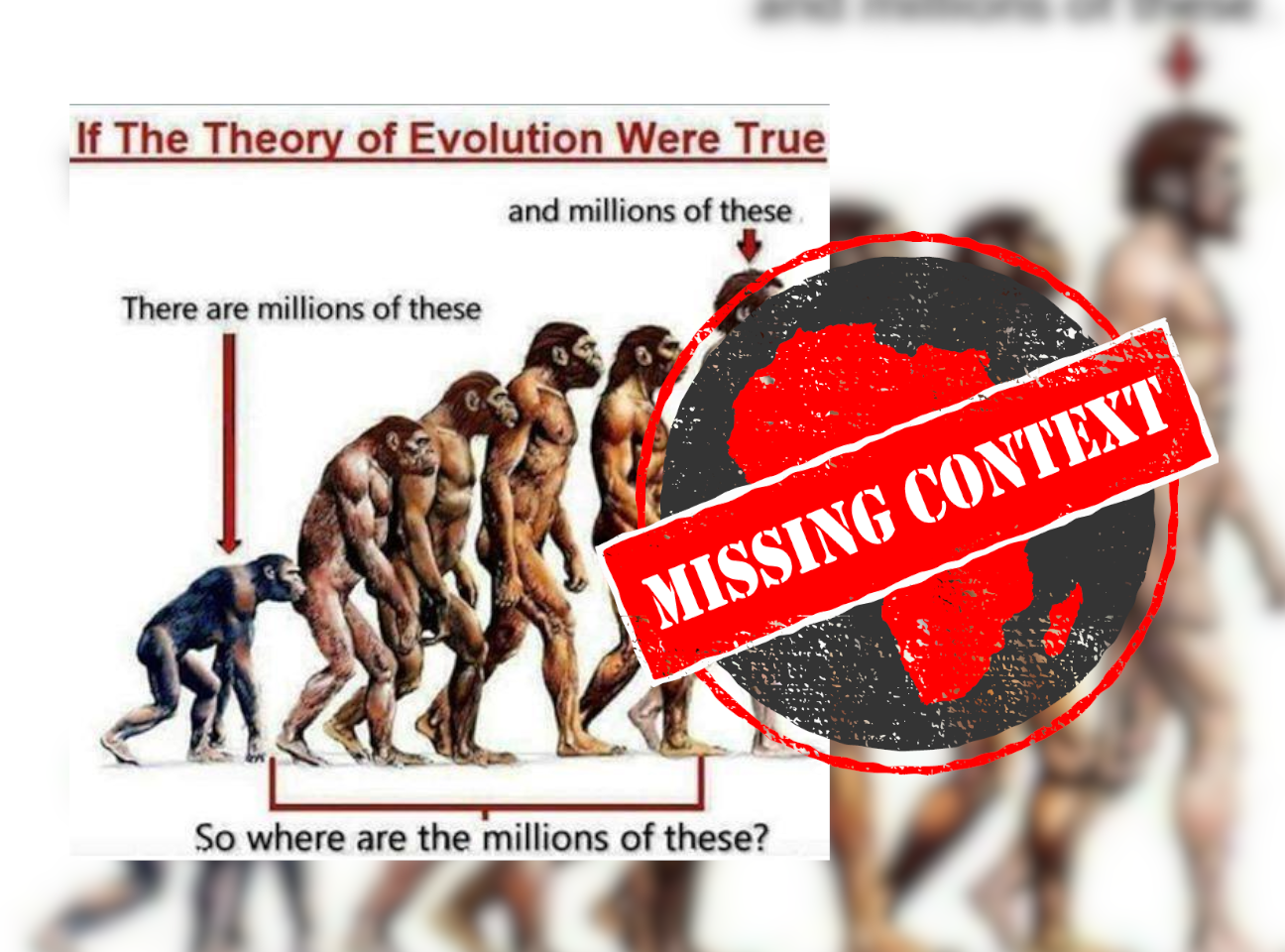 Evolution is survival, not progress

Modern evolutionary theory was launched with the 1859 publication of English naturalist Charles Darwin’s book On the Origin of Species by Means of Natural Selection.

The idea of evolution – that species change over time – had been around for a while. What wasn’t understood was how it worked.

Darwin’s theory is that evolution is driven by natural selection. Small, slow and steady beneficial changes to organisms, changes they’re born with, help them survive in their immediate environment.

The theory’s famous takeaway is “survival of the fittest”. But here “fittest” means a species being able to produce lots of babies, and those babies surviving to make more babies.

Creatures without good mutations, or with damaging mutations, tend to die before they can produce many offspring. The young they do have face the same survival challenges.

That’s the basic idea, although evolution has since been found to be a bit more complicated.

Nonetheless, evolution by natural selection is accepted as the way adaptation allows species to survive in their immediate environment.

Sometimes, survival depends on the body type of a species becoming more complex. But in other environments, species can evolve to be less complex.

The image in the graphic is a copy of an illustration published nearly 60 years ago in Early Man, a popular science Time-Life book from 1965. The illustration was titled “On the Road to Homo Sapiens”. It quickly became famous, and known as The March of Progress.

Homo sapiens – Latin for “wise man” – is the scientific name of the human species.

The title of Early Man – omitting children and women – indicates how out of date the book is. And the illustration’s two names indicate its misinterpretation of Darwin’s theory. Evolution isn’t a progressive march or a road to any destination. 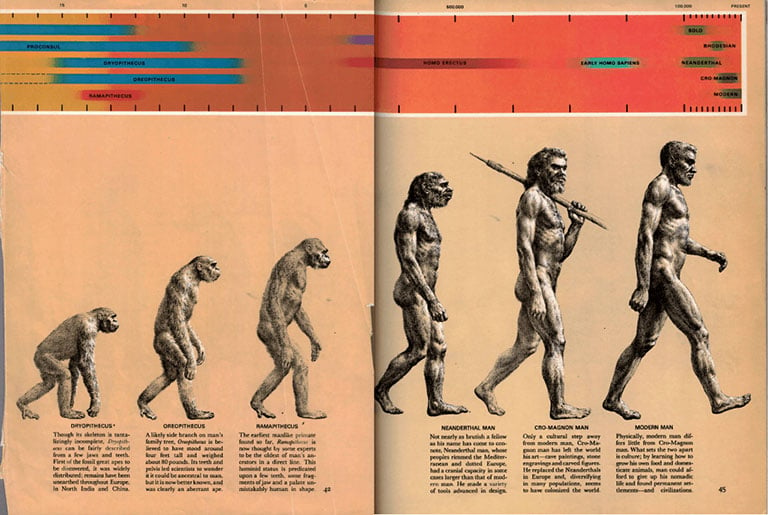 The first figure in the shorter version is identified as Dryopithecus, an ancient genus of ape – not a modern chimpanzee. And the illustration’s rendering of Dryopithecus is based only on fragments of fossils of creatures that died a full 23 million to 2.6 million years ago.

There’s no evidence that Dryopithecus was our great-times-many grandparent. It was simply an ape, like us, but lived a long time ago. There’s currently no way of determining the genus’s relationship to us.

And while chimps are now our closest relatives, we didn’t descend from them. Instead, we have a common ancestor that lived an estimated 13 million years ago. Since then, we’ve changed a lot – and so have chimps.

Cousins – maybe – but not ancestors

We’re part of an ancient group of human species, but the only one around today. Past human species, identified from good fossil evidence, include Homo neanderthalenis (Neanderthal man), Homo habilis (handy man ) and Homo erectus (upright man).

It’s worth noting that Homo erectus probably roamed much of the planet for more than 1.8 million years, with the earliest fossil dated at 1.89 million years ago and the most recent at just 110,000 years ago – when we were also around. Fossils identified as us, Homo sapiens, have been dated to as far back as some 300,000 years ago.

Over those 300,000 years, fossil evidence suggests, several other species of human existed. They were, possibly, our cousins – but not our ancestors.

The incorrect belief that human evolution is a progressive march to an ideal has led to much suffering: genocidal notions of racial purity, the harmful eugenics movement, and apartheid in South Africa.

Darwin didn’t have this belief. The only illustration in his 1859 book was a diagram of species ancestry that looked like a branching tree – not a road or any “march of progress”.

Finally, a word on “theory”. In science, theories are accepted ideas. They include the big bang theory, the theory of gravity, the theory that Earth is round – and the theory of evolution by natural selection.

Proven dating of fossils shows that members of the human family have existed for millions of years. We’re just the one surviving branch. And chimps are our distant relatives, not our ancestors.