IN SHORT: Facebook posts offering free babies’ nappies are in fact part of an editing scam, in which the messages start out as an appeal about a missing child or lost pet. Here’s how to spot this new method of scamming.

“We Are Holding A Free Nappy Give Away Event” reads a message posted on several community Facebook groups. But this seemingly innocent message is actually an example of a scamming method that is becoming more and more common on Facebook.

What’s the scam, and what gives its posts away? 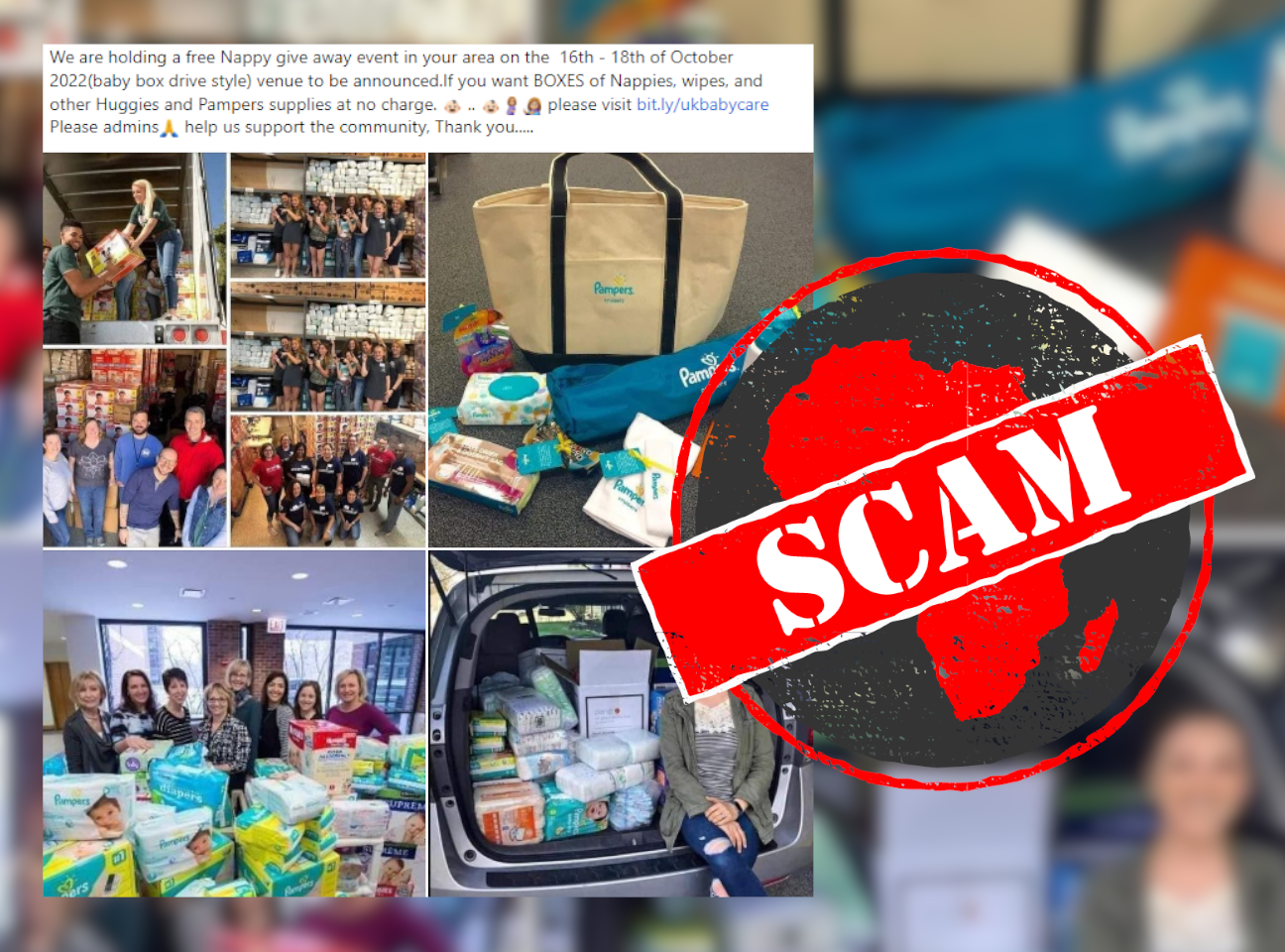 Posts edited to include deceptive links

This method of scamming takes advantage of the ability to edit Facebook messages after they have been posted. As we’ve described in some of our other fact-checks about the scam, they usually begin as ordinary posts that don’t seem harmful – although many are still false.

Because the posts don’t look like scams, Facebook page moderators are more likely to let them through. And they’re more likely to be shared by other users. But once they’ve been shared, the messages are edited to include a more obvious scam.

For example, the edit history of the nappy drive Facebook posts reveal that they used to be something else. Most were about a missing child or lost pet, two false claims the scamming method has used before.

The new content includes a link. In many cases the link has been through a URL shortener, so it isn’t clear where it leads.

In this case, the link goes to a generic website that gives no information about the “nappy drive” and instead offers gift baskets of baby supplies. The websites of real charities typically include information like who runs the organisation and where it is based. But this webpage is suspiciously blank.

It is likely a scam aiming to trick victims who sign up for the “giveaway” into giving up personal information.

Several versions of the nappy drive scam have been posted on Facebook, with only minor differences, such as changing “nappy” to “diaper”.

But as we’ve seen in the past, it’s not the only claim this scamming technique has used.

So what red flags can you look out for to avoid false posts like these?

Don’t trust identical messages posted many times in many locations

A good first step when checking whether a post is trustworthy is to investigate the account that shared it.

One pattern that drew Africa Check’s attention to this scam is that, while its false messages are generally posted on local Facebook groups in the United Kingdom and United States, the users posting them are from elsewhere. Most have their locations set to South Africa or Zimbabwe.

Sharing information about a country you don’t live in isn’t necessarily a sign of a false post, but it may be a red flag if that information isn’t more globally relevant.

It’s also worthwhile checking whether the same message has been posted many times, in many local groups. An early example of this scam involved false claims about a serial killer targeting women in dozens of different cities in the United States and the United Kingdom.

The same person couldn’t be in every city at once. So at the least, most of these posts must have been false. As it turned out, all of them were.

Just searching Facebook for the text of a post can turn up many other examples. It’s possible that many people are sharing an identical message for innocent reasons. But if a message that’s supposedly specific to a certain area is being shared in dozens of places, it’s safe to assume it isn’t genuine.