No, December football tournament not suspended by Kenya’s interior ministry and Citizen TV didn’t tweet so

A screenshot of a tweet which appears to have been sent by Citizen TV Kenya and is dated “30 Dec 21” says that the Kenyan interior ministry suspended “sporting activities” sponsored by senator Cleophas Malala of Kakamega county in western Kenya.

The senator hosts a football tournament every year in the western Kenya constituency. It is called the Cleo Malala Super Cup and is usually played during the long end-of-year school holidays.

The tweet in the screenshot reads: “Ministry of Interior orders an immediate suspension of sporting activities sponsored by Kakamega Senator Cleophas Malala ahead of Azimio La Umoja Western Chapter. The final games will not take place as scheduled.”

“Azimio la Umoja” is Kiswahili for a “resolution for unity”, and is a campaign movement spearheaded by Kenyan opposition leader Raila Odinga.

Francis Atwoli, the secretary general of the Central Organization of Trade Unions, organised a political rally for the movement on the final day of Malala’s tournament, 31 December 2021.

On 26 December Malala threatened to block the rally. What happened next and did the interior ministry really tweet about it? 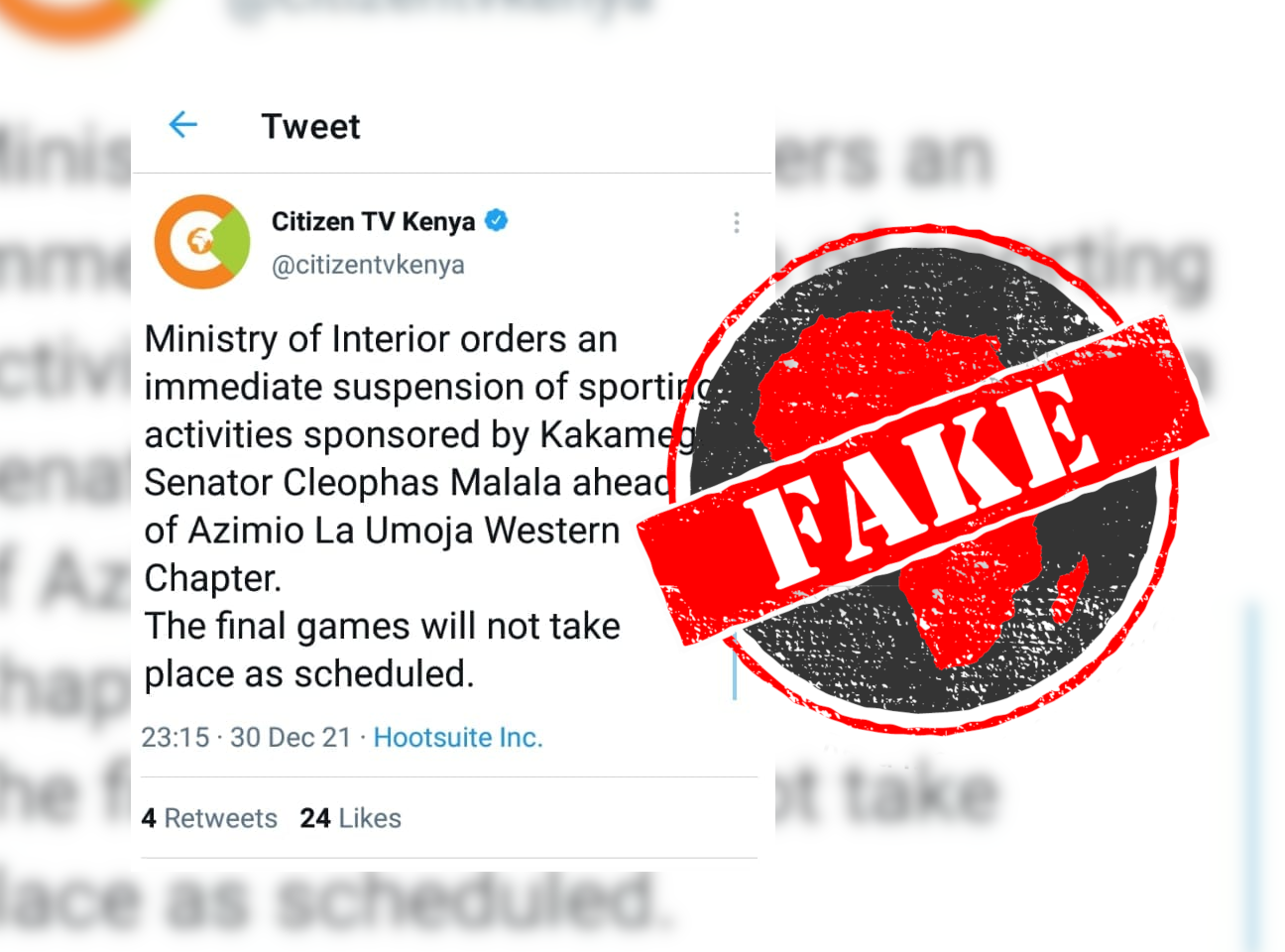 Malala wrapped over knuckles, tournament and rally went ahead

The National Cohesion and Integration Commission summoned Malala on 27 December for making inflammatory remarks about blocking the movement’s rally. After the summons, the senator vowed to maintain peace and said he had earlier just been making a “political statement”.

The football tournament went ahead on 31 December at the Mumias Complex, at the same time as Atwoli’s rally at Bukhungu stadium in Kakamega town. Kakamega and Mumias are about 30 kilometres apart.

We could not find any statement from the interior ministry on the matter.

Africa Check went through Citizen TV social media timelines but could also not find the tweet in the screenshot. But we found a post on Facebook dismissing it, from 31 December.

It showed a screenshot of the tweet, stamped “FAKE” in red. The interior ministry didn’t suspend the football tournament held 31 December and Citizen TV didn’t tweet that it had.