No, eating or standing on onions won’t cure your high blood pressure – see a doctor

IN SHORT: Just like onions form the base of many dishes, we also see them crop up again and again in health claims. But there are recipes where grated onions have no place and standing on a pile of them will have no effect on your blood pressure.

A video circulating on social media claims to show you how to “lower high blood pressure in 5 minutes with just an ONION”. The video was posted to Facebook in June 2022 and reposted in October, with each post receiving 1.5 million views.

In the video a narrator describes how blood pressure can be lowered by standing with each foot on a pile of grated onion. This, the video claims, will reduce blood pressure by one point for every five minutes spent standing on the vegetable.

Another video making the same claim appeared on Facebook in August 2022, and yet another on YouTube – by an account with 3.3 million followers – was posted earlier in the year.

Your body’s blood pressure naturally varies throughout the day, based on your physical activity, what you eat and drink, and other factors. But blood pressure that is consistently high, known medically as hypertension, can be dangerous. Over time, high blood pressure can increase your risk of strokes, heart attacks and heart disease.

A doctor would generally recommend diet and lifestyle changes to help someone with hypertension, and possibly also prescribe medications.

So is there any truth to this pungent tip about standing on onions? We checked. 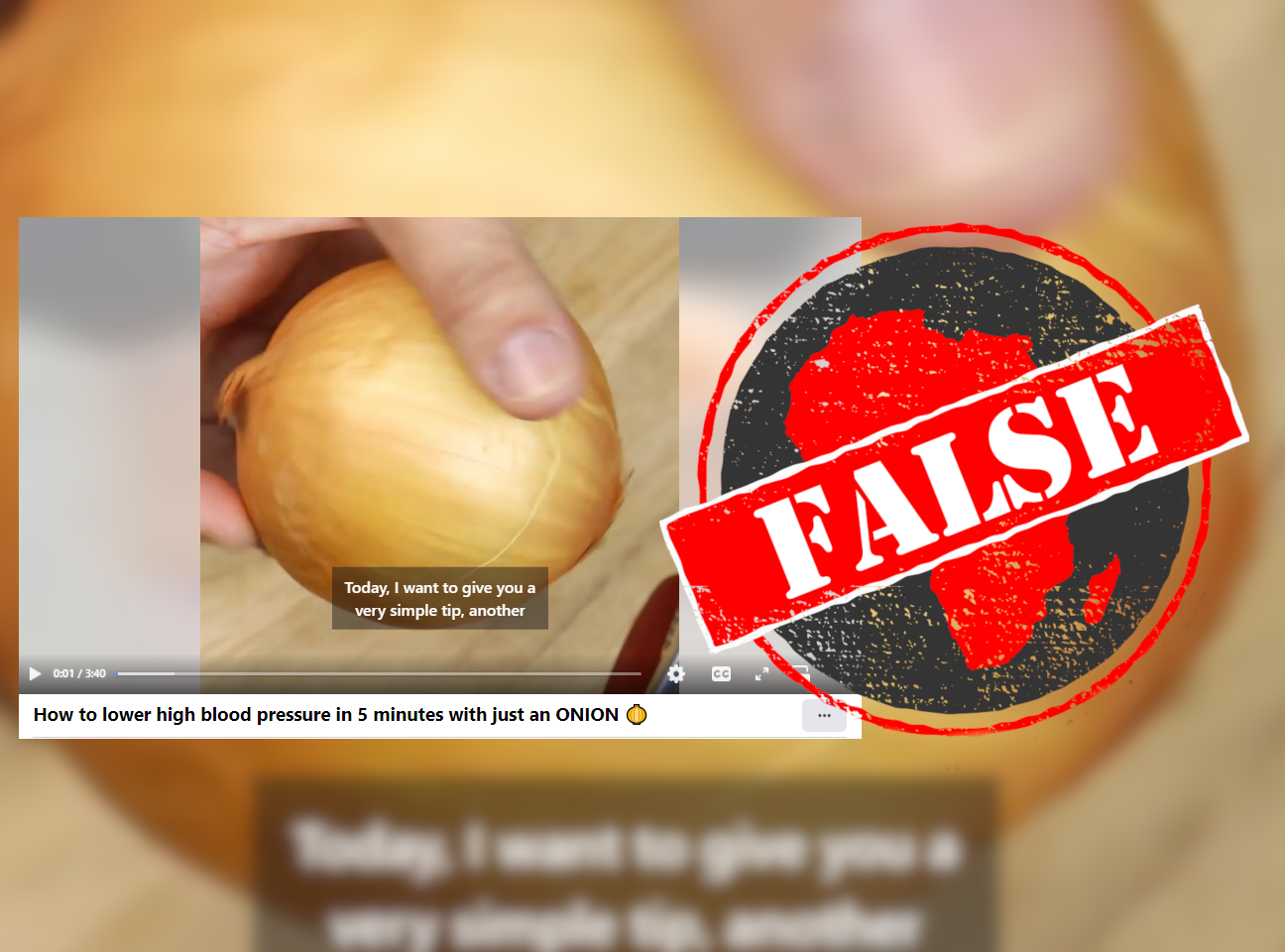 Africa Check has previously busted myths that onions on the feet cured the flu and Covid-19, and that eating onions cured everything from insomnia and diabetes to erectile dysfunction.

The idea of onions as medicine might relate to a centuries-old belief that onions could ward off the bubonic plague. Whatever the origin, onions are a popular go-to remedy suggested for hypertension and a variety of other ailments.

Unfortunately, high blood pressure is another condition that’s unlikely to be cured by onions alone. There is no scientific evidence to suggest that putting onions on your feet, under your feet or in your socks can cure any disease, including having any effect on high blood pressure.

Connection between blood pressure and onions not backed up by evidence

Another study investigated quercetin’s effect on humans with hypertension and found similar results, so it seems as though quercetin might play a role in lowering blood pressure.

But this is still early research, and does not provide enough evidence for scientists to form any conclusions. And these studies didn’t look at onions as a whole vegetable, but a concentrated chemical extracted from the skin of onions, which are often discarded when preparing food.

Other research suggests that eating onions themselves might lead to a decrease in blood pressure in humans and rats, but these are small studies with many limitations.

More research is needed before we can say anything definitive about the health benefits of onions. Adding onions to your diet probably won’t hurt, and may have other health benefits along with a generally healthy diet and lifestyle.

But there is not enough evidence that eating the vegetable can lower blood pressure in people with hypertension. And no evidence that standing on grated onion will affect your health at all. So save the stench and see a doctor instead.