No, Einstein didn’t say he ‘feared the day’ technology would make a ‘generation of idiots’

By now you may have seen the viral Facebook meme with the headline: “The day that Albert Einstein feared is here”.

Yes, the one with photos of various social situations: a family having dinner, a couple on a date, teens on the beach, fans at a stadium, friends out for coffee. The catch? The people in the photos are all on their mobile phones.

The kicker is at the end:

“I fear the day that technology will surpass our human interaction. The world will have a generation of idiots.” – Albert Einstein

Albert Einstein, considered a genius of the 20th century, was a physicist who developed the theory of relativity.

But did he say that?

Einstein did worry about technology

Fact-checking site Snopes investigated the quote’s origins and concluded that it was not by Einstein.  For one, the quote couldn’t be found in the Ultimate Quotable Einstein, a book compiled by Alice Calaprice, a renowned Einstein expert.

The closest Einstein came to saying anything like it was this: “I believe that the abominable deterioration of ethical standards stems primarily from the mechanisation and depersonalisation of our lives – a disastrous byproduct of science and technology. Nostra culpa! [We are to blame!]”

In this quote, according to Calaprice’s book, Einstein was expressing his concern about the negative effects of technology in a letter to Otto Juliusburger on 11 April 1946. 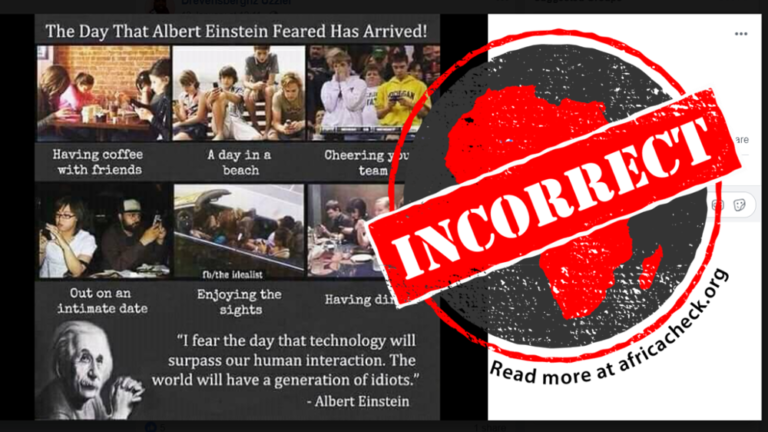 Phrasing of quote has changed over time

“Individuals who were aggravated by the behaviour patterns of cellphone users probably facilitated the construction, evolution, and dissemination of this meme,” the website says.

“The phrasing of the saying has changed over time and different sets of pictures have been attached.”

Many dubious quotes attributed to Einstein

Quote Investigator points out there are three version of the quote, including one posted in November 2012 on Wikiquote that reads: “I fear the day when technology overlaps our humanity. It will be then that the world will have permanent ensuing generations of idiots.”

Wikiquote categorised the quote as “unsourced and dubious/overly modern sources”.

The category has a helpful caution: “Einstein is one of those major iconic figures to whom many statements become attributed; unsourced attributions to him should usually be treated with some scepticism, and often a great deal of it.”