A message posted on Facebook quotes Olusegun Obasanjo, a former military ruler and president of Nigeria, as saying the country faces an imminent crisis.

“Every Igbo man should get ready of what is to come, Internet will be shut down, get a gun if you can, don't let history repeat itself - Obasnajo warns,” it reads.

“Ban Twitter, ban FB, shut down IG then suspend constitution and declare state of emergency in Nigeria, they will say it for security reason. Then the massacre of the Southerners will start for real. they will tell NASS to cool down, their money is intact. Do u see where they are going with it now?” NASS is Nigeria’s national assembly.

The post includes two photos: one of Obasanjo, the other of a long line of military vehicles driving down a road.

Nigeria’s Igbo people are said to live mainly in the southeast region, the site of long-running separatist conflict.

The region was once known – and by separatists, continues to be known – as Biafra. In May 1967, Biafra declared its independence from the rest of Nigeria. A civil war followed. It’s estimated that 500,000 to 3 million people died from disease, starvation and the conflict itself. Biafra’s defeat in January 1970 ended the war.

Obasanjo was Nigeria’s military ruler from 1967 to 1969 and then president after the restoration of democracy from 1999 to 2007. He remains influential in Nigeria and the rest of Africa.

But has he really warned that history is about to “repeat itself” in a “massacre of the Southerners”? We checked. 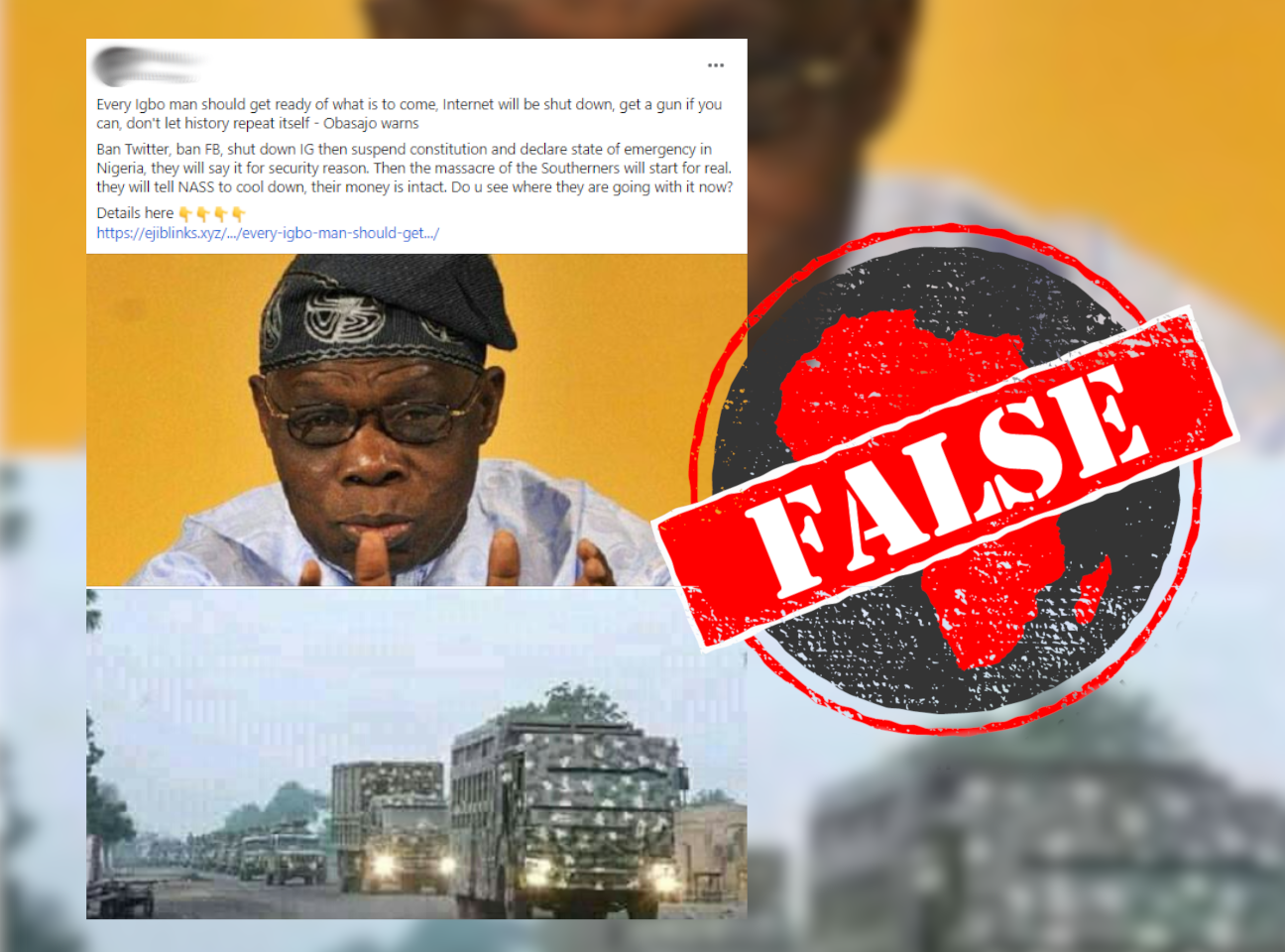 No mention in credible media

The post gives no details of when and where Obasanjo made the statement. This lack of context is often a sign that a claim is false.

And Obasanjo, a prolific writer of letters about national issues, is unlikely to have used the informal and ungrammatical language seen in the message.

More than this, if he had issued this warning, it would have made national and international news. It hasn’t. There have been no credible reports of the former president saying this.

In fact, in October 2021 Obasanjo said he was optimistic about the country’s future, at an event at the Olusegun Obasanjo Presidential Library in Ogun state.

“My faith in Nigeria remains unshakable. My optimism about the future is resounding,” Nigeria’s Guardian newspaper quoted him as saying.

“I see hope, in the determination, resilience and the indomitable spirit of Nigerians. I see hope in their resistance when they are pushed to the wall.”