The graphics first appeared on Facebook in March 2022 with claims that the anchors were passing a “hidden message” of solidarity with the United Democratic Alliance (UDA). The party’s colours are yellow, green, black and white.

The UDA is led by current deputy president William Ruto. He is running for president in Kenya’s August 2022 elections.

There appear two be two versions. The news anchors in the graphics include Fridah Mwaka and Olive Burrows of NTV Kenya; Victoria Rubadiri, Mukami Wambora, Yvonne Okwara and Mwanahamisi Hamadi of Citizen TV; and Sharon Momanyi of KTN News.

One of the first versions can be traced to Emmanuel Talam, a former editor currently working as communications director in the deputy president’s office.

“Media owners vs Media practitioners....Yellow is the colour for and of TV. Hustler Nation is real,” he tweeted with the graphic in March. “Hustler Nation” is shorthand for Ruto’s supporters.

But did the news anchors really wear yellow to show their support for UDA? We checked. 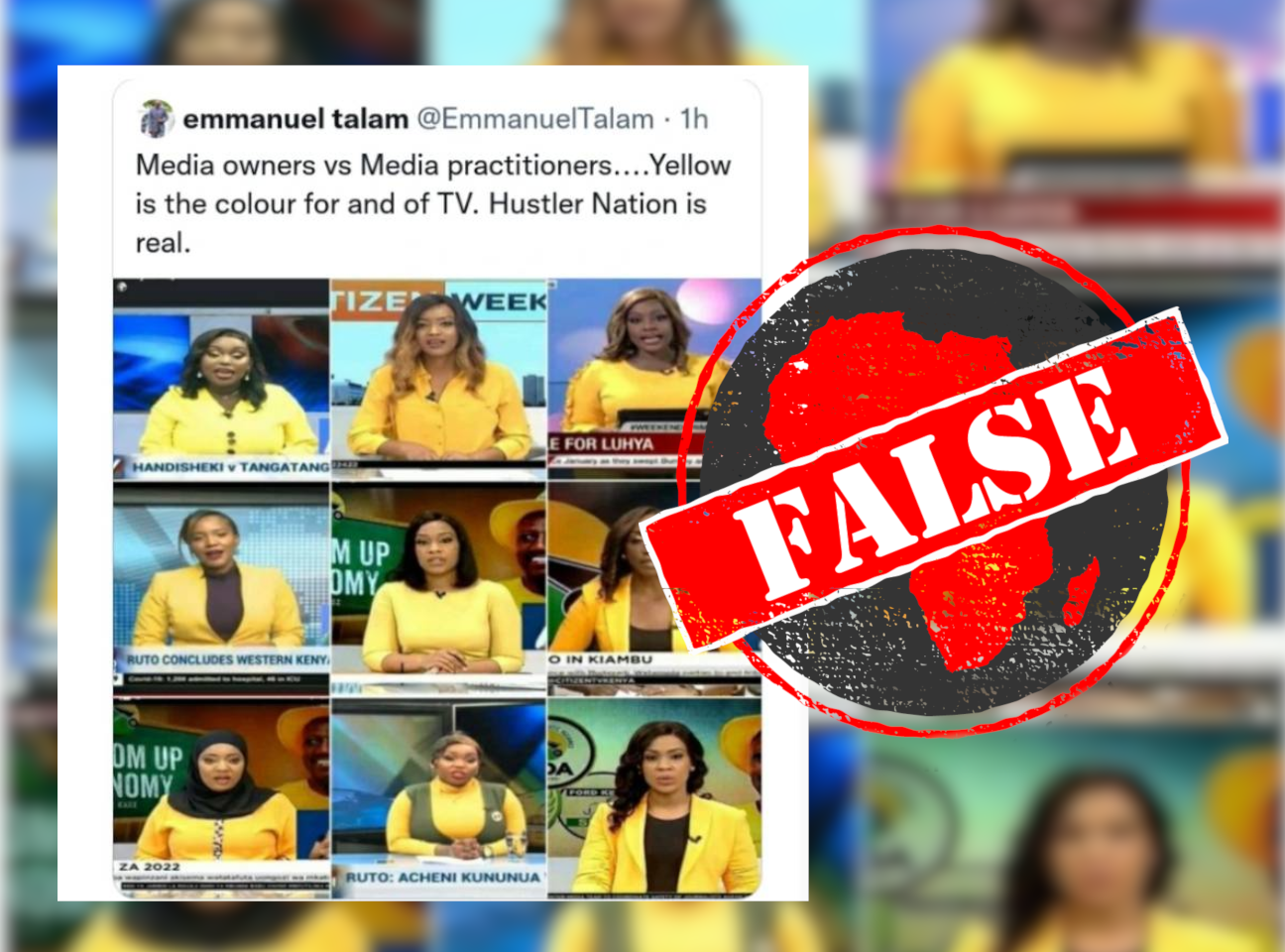 Google reverse image searches of two screengrabs of Mwaka show that one dates to a 5 January broadcast when she reported on a parliamentary debate.

The other screengrab is of Mwaka presenting the news on 26 March. She reported that Ruto had called out president Uhuru Kenyatta over claims that the government was paying politicians to support the ruling Jubilee Party instead of using the money to eradicate drought.

Google reverse image searches of the screengrabs of Rubadiri show that in one she was reporting about Ruto’s trip to Vihiga on 6 January.

The other was captured on 26 February as she reported about the formation of a grand coalition of Azimio la Umoja and the One Kenya Alliance.

A Google reverse image search of the screengrab of Citizen TV anchor Wambora shows it was captured as she presented news on Ruto’s trip to the US on 27 February.

A Google reverse image search of KTN News presenter Momanyi’s screengrab reveals it was taken on 31 December 2021 as she reported on a Azimio la Umoja campaign rally at Kakamega county’s Bukhungu stadium.

A Google reverse image search of Okwara’s screengrab shows that it was taken on 27 January as she reported on Ruto’s campaign in Kiambu county.

A Google reverse image search of Olive Burrows’s screengrab shows that it was taken on 7 January as she reported that Ruto had concluded campaign tours in western Kenya.

A Google reverse image search of the screenshot showing Hamadi reveals it was taken on 14 December 2021 as she reported that Ruto held a meeting with Samburu county leaders.

We checked online for videos and posts where the news presenters wore yellow before the party was formed.

Africa Check spoke to Muthoni Ngigi of Bella Borsa Consultants, an image consultancy firm, about the choice of yellow for news anchor’s outfits.

“Colour choice definitely matters at any public appearance or as a symbolic presentation, especially for those at the forefront of service delivery to the public,” Ngigi told us. “I think that colour choice during heightened seasons (for example, political or awareness campaigns) is of paramount consideration.”

Ngigi added that anchors who prefer yellow tend to be “young and seek to exude creativity, optimism, and excitement”.