IN SHORT: After Labour Party presidential candidate Peter Obi didn’t meet governorship candidate Beatrice Itubo during a visit to Rivers state, the rumour mill got working. But Itubo was reportedly ill at the time, and there’s no evidence that she’ll now be “mobilising party members” against Obi.

A message circulating on Facebook claims that Beatrice Itubo, the Labour Party governorship candidate for southern Nigeria’s Rivers State, has vowed to work against Peter Obi, her party’s presidential candidate.

Nigeria is set to hold general elections in early 2023.

The claim began to circulate after Obi, one of the frontrunners in the presidential race, was accused of refusing to visit Itubo when he visited Rivers state.

Critics berated Obi for not visiting Itubo while he was in Rivers state. Itubo was said to be ill at the time. Obi apologised to Itubo in a tweet thread and referred to it as “an inadvertent oversight” and said he “was not informed or aware of her sickness”. 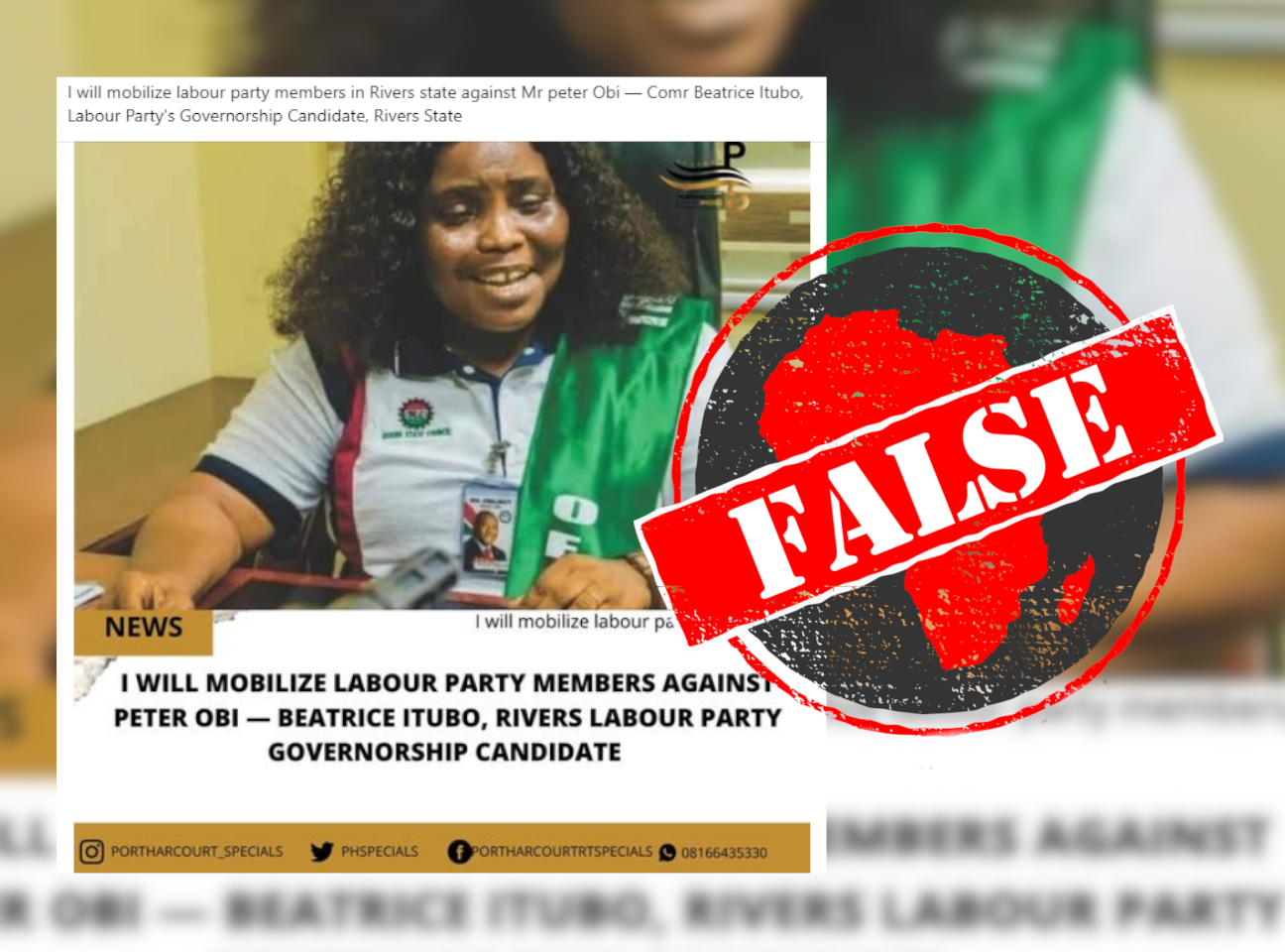 Accusation of trading governorship for presidency

Obi was also accused of trading the party’s chance of winning the state’s governorship election in exchange for Wike’s support of his presidential bid.

Wike had appealed to Obi to tell his supporters that the Labour Party stands no chance of defeating the PDP in the governorship election in Rivers state and pledged to support Obi’s presidential campaign.

Obi apparently accepted the offer when he said: “You [Wike] know you are in charge. We will not quarrel with you; anybody who quarrels with you doesn’t know what he is doing. I will not try it. I am begging, give us federal and we will give you the state.”

But did Itubo vow to get members of the party to work against Obi?

Itubo’s reaction does not support the claim

The various posts provide no details about where and when Itubo said she would oppose Obi in Rivers state. This lack of detail is a red flag.

The Nigerian media have reported the most recent developments related to Obi’s candidacy, including his apology to Itubo. But no credible media organisation has reported that Itubo plans to oppose Obi.

In her public reaction, Itubo downplayed claims that Obi had traded her governorship bid and would no longer support her ahead of the governorship election.

A statement by Asim Adams, spokesperson for the Beatrice Itubo Campaign Council, published on Itubo’s Facebook page on 17 November 2022, said Obi spoke in metaphor and analogies in responding to Wike’s offer.

“Unfortunately, these metaphors and analogies have been taken by some from the way they interpreted it to mean His Excellency Peter Gregory Obi has abandoned project Beatrice Itubo and other candidates for the forthcoming elections ... far from it,” the statement reads.

“Be rest assured that he never meant more than what he stated as we have firmly confirmed from good source and authority that it was a mere statement which never resonated beyond where it was made in the atmosphere of conviviality...and any interpretation of sort or misgivings should be discountenanced.”

And there’s no evidence on Itubo’s Twitter timeline that she is now opposed to Obi.

She also told journalists that Obi’s speech was a political statement. She added that “the Obi that I know is wiser than that”.

The claim is not supported by any evidence.