IN SHORT: As election fever spreads across Nigeria, claims about the candidates vying for president are heating up too. Numerous posts on social media claim the ruling party’s Bola Tinubu has said he attended a prestigious college in Lagos but that it must be a lie, as he says he graduated four years before the school was founded. But there’s no evidence for this.

A message circulating on social media claims Bola Tinubu, the presidential candidate of the All Progressives Congress, Nigeria’s ruling party, has said he graduated from Government College Lagos in 1970.

The only problem? That’s four years before the school was founded.

“Tinubu according to his INEC form graduated in 1970 from Government college Lagos, 4yrs before the school was established in 1974!!” one Facebook post, published 20 November 2022, reads.

Many of the posts include a photo of a notice board displaying the names of the school’s “principals since inception” in September 1974.

“INEC form” refers to the form filled in by candidates contesting Nigeria’s elections. It is submitted to the Independent National Electoral Commission, or INEC. Nigeria is set to hold general elections in February 2023.

Tinubu’s background and schooling have been controversial since he was governor of Lagos state, between 1999 and 2007.

The controversy has been well reported in the media over the years. Rumours include allegations that Tinubu falsely claimed he attended St Paul Children’s Home School and secondary education at Government College, both in Ibadan in southwestern Nigeria.

But has Tinubu said he graduated from Government College Lagos in 1970? 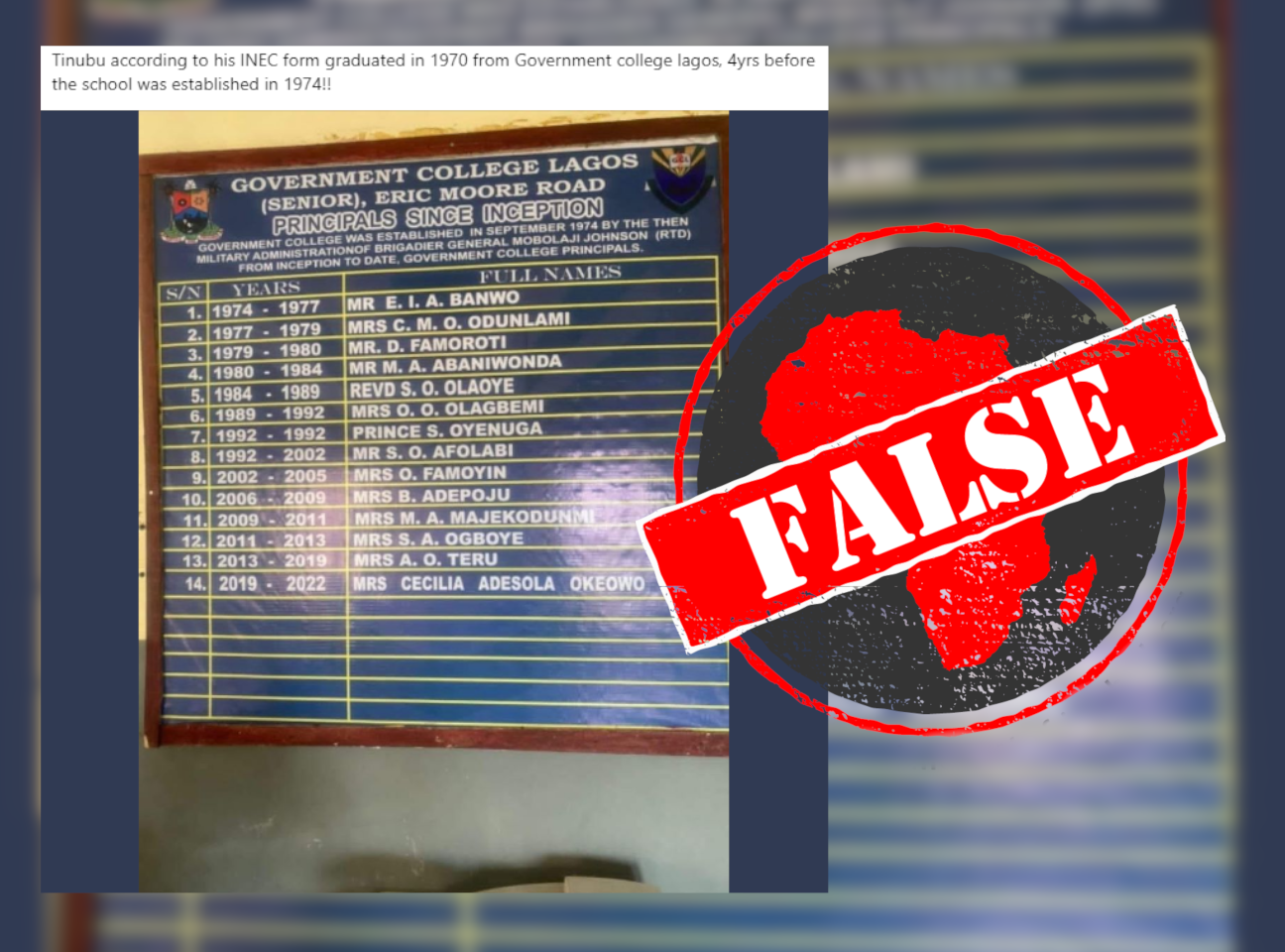 Claim not supported by available information

Contrary to the claim, the INEC form filled in by Tinubu contains no information about his primary and secondary education.

He only stated that he had a bachelor’s degree from Chicago State University, United States, and submitted an affidavit that said his credentials were stolen while he was in exile from Nigeria between 1993 and 1998.

Tinubu’s campaign has insisted he does not have to provide any information to prove he had primary and secondary education.

Where did this Government College-story come from?

There are no media reports of Tinubu ever claiming to have graduated from Government College Lagos.

The school was only mentioned in a document reportedly filed by lawyer Mike Enahoro-Ebah, along with three criminal complaints, at the Chief Magistrate Court in Wuse Zone 6 in Abuja, Nigeria’s capital. The suit alleges that Tinubu gave false information and forged documents to the INEC.

The lawyer claimed he had subpoenaed Chicago State University through a colleague and received documents relating to Tinubu.

Enahoro-Enah said the documents show that the “Bola Tinubu” who graduated from Chicago State University was a woman born in 1954, two years after the presidential candidate’s official birth date, who graduated from Government College Lagos in 1970.

The suit, reportedly filed on 10 November 2022, has yet to be heard in court at time of writing.

But the claim that the INEC form filled in by Tinubu says he graduated from Government College Lagos in 1970 is false.