“Second Breastfeeding Baby Dies Of Blood Clots And Inflamed Arteries After Mother's Pfizer Shot As Per VAERS,” reads the alarming headline of what seems to be a news article, posted as a screenshot on Facebook in September 2021.

The screenshot has been viewed more than 2.4 million times so far.

Thrombosis, a type of severe blood clotting, has been reported as a rare side effect of the Johnson & Johnson and Oxford-AstraZeneca Covid vaccines. These are both viral vector vaccines, meaning they use a modified version of a different virus to instruct cells to make the Covid-19 spike protein. This then triggers an immune response.

The Pfizer-BioNTech vaccine is not a viral vector vaccine. But have two breastfeeding babies died of blood clots after their mothers got the Pfizer jab? We checked. 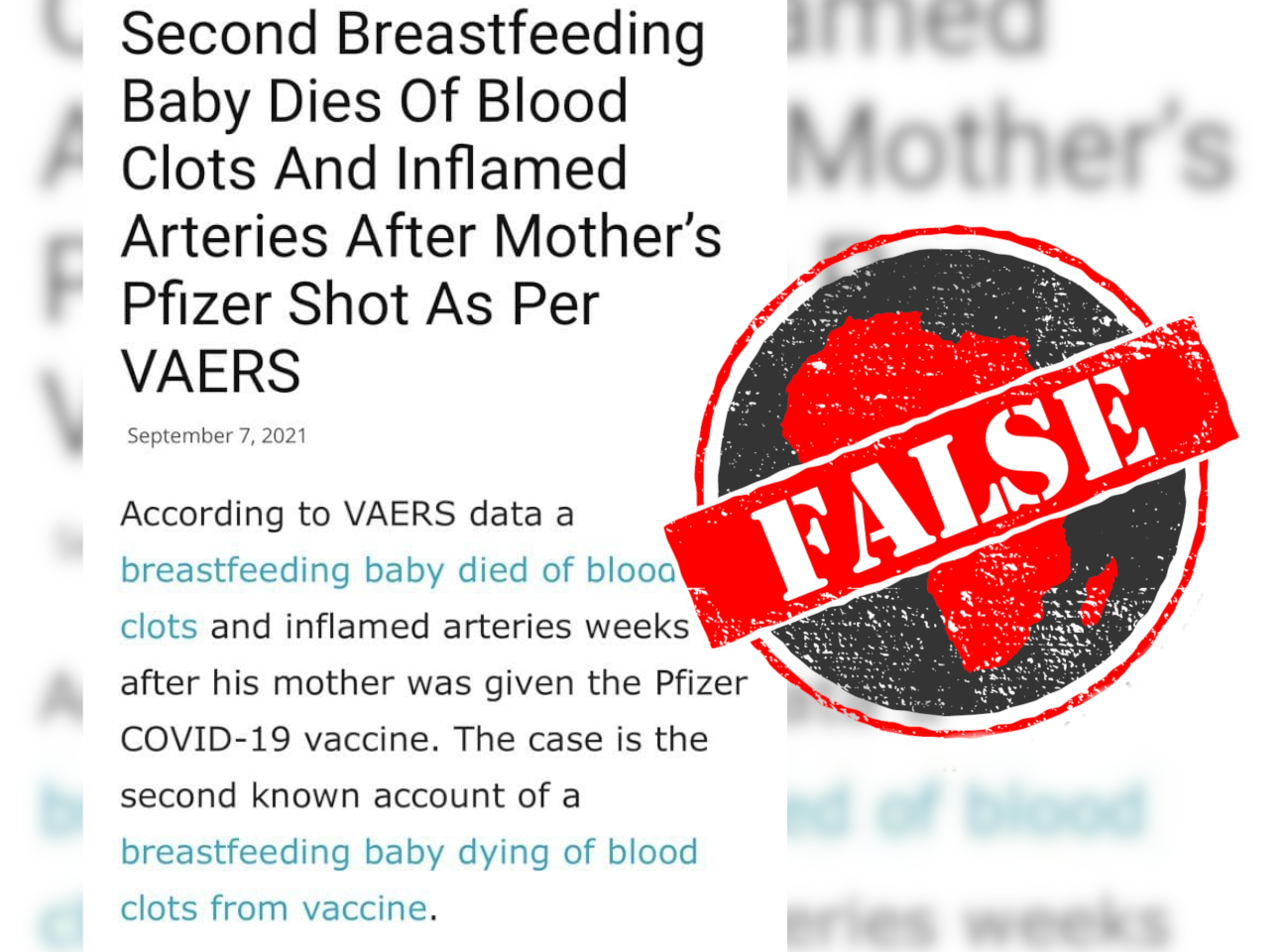 The screenshot carries the logo of Great Game India, a quarterly journal on geopolitics and international relations. A quick search found the article on the journal’s website. But at least one expert has dismissed Great Game India as a “little-known Indian conspiracy website”.

Vaers is “a national early warning system to detect possible safety problems in US-licensed vaccines”. It’s run by the US Centers for Disease Control (CDC) and Food and Drug Administration (FDA). The system allows any person to report any health event after receiving a vaccine.

The CDC and FDA warn that a report on Vaers alone cannot be used as evidence that the vaccine contributed to or caused the adverse health event.

“The reports may contain information that is incomplete, inaccurate, coincidental, or unverifiable. In large part, reports to Vaers are voluntary, which means they are subject to biases,” the system’s website says. “Data from Vaers reports should always be interpreted with these limitations in mind.”

We could find no evidence that the deaths of two breastfeeding babies as a result of their mothers being vaccinated have been confirmed by the CDC or FDA.

The Pfizer vaccine is an mRNA vaccine. This means it carries messenger RNA that instructs the body to make the coronavirus spike protein. This then triggers an immune response and results in the body creating antibodies to the virus.

This is because mRNA vaccines are made of lipid nanoparticles that contain mRNA for the Covid-19 spike protein. The vaccine is injected into the muscles and the nanoparticles are taken up by the muscle cells.

The ABM said it was unlikely that the vaccine lipid could enter the bloodstream or breast tissue.

“If it does, it is even less likely that either the intact nanoparticle or mRNA transfer into milk. In the unlikely event that mRNA is present in milk, it would be expected to be digested by the child and would be unlikely to have any biological effects,” the statement said.

A recent study by the US Washington University School of Medicine in St Louis found some evidence that vaccinated breastfeeding mothers can pass on protective antibodies to their babies through breast milk for at least 80 days after injection.

Messenger RNA breaks down in the cells within 72 hours, making it implausible that a baby would develop blood clots weeks after their mother was vaccinated.

There have been some reports of blood clotting after injection with the Pfizer vaccine. But the New Zealand medicine safety authority MedSafe has reported there is “no indication that these cases are in any way similar to the [thrombosis] cases reported with the other Covid-19 vaccines.”

And a reported case of blood clotting occurred within 48 hours of receiving the Pfizer vaccine – not weeks later. The 66-year-old patient recovered quickly after treatment.