Several times since the outbreak of Covid-19, the South African authorities have banned or restricted the sale of alcohol. These restrictions and other measures were meant to slow or prevent the spread of the disease.

Twitter and Facebook users shared an image of a poster apparently displayed at a Pick n Pay, a popular local supermarket chain. The poster reads: “Stock up before another lockdown.”

The image is often captioned with claims that the “government has already told the alcohol retail outlets, 2 December 2021 to 15 January 2022”.

But is there any evidence further restrictions will be in place over the summer holiday season? 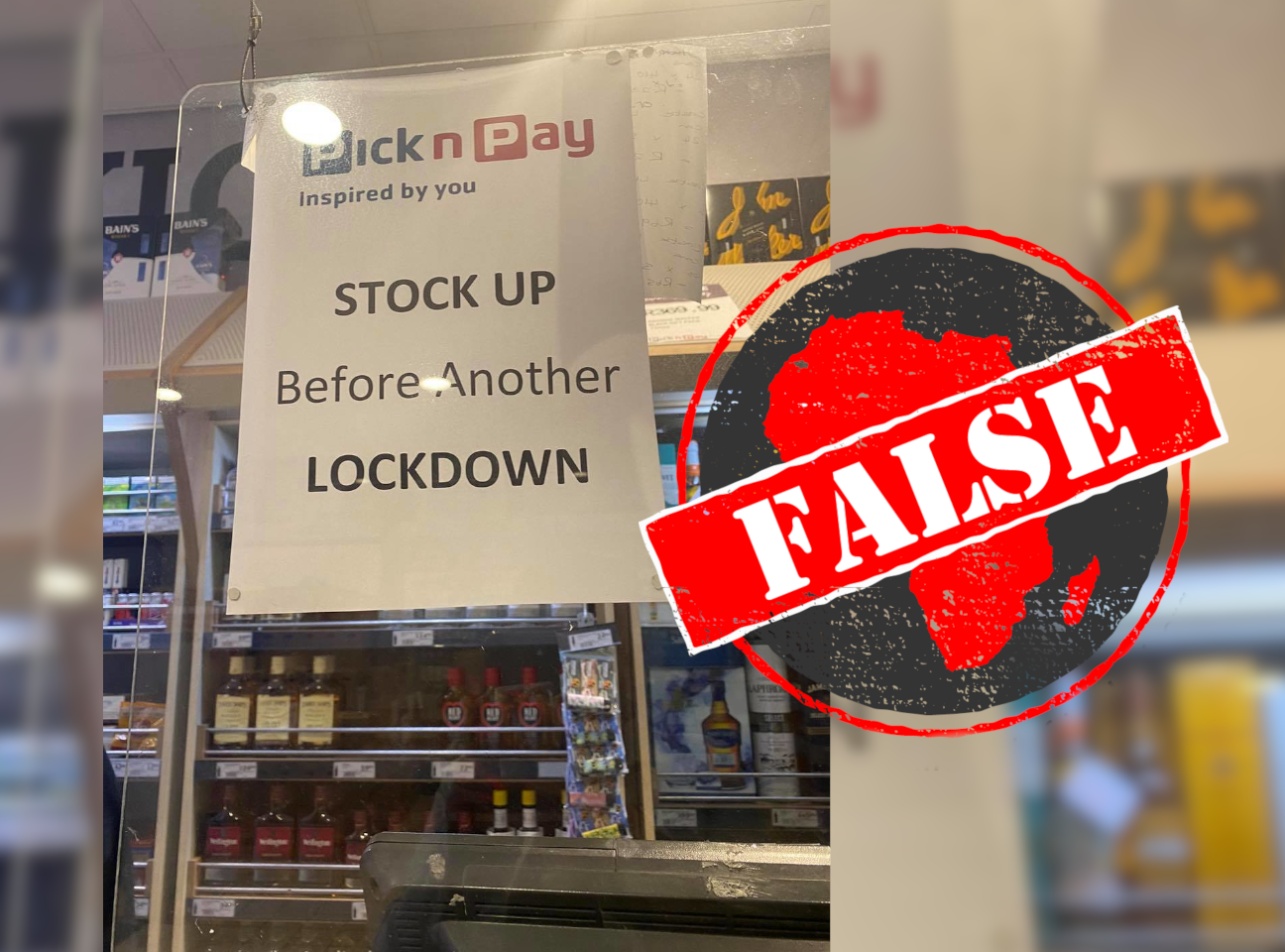 South African news outlet Eyewitness News (EWN) reported on 8 November that there were “no indications yet that further Covid-19 lockdown restrictions would be necessary”.

The national health department’s acting director-general Dr Nicholas Crisp told EWN: “There are no indications at the moment that this will be necessary or even valuable to implement any form of restrictions right now.”

Crisp did say that a fourth wave of infections in the coming months was possible, but that the severity of the wave and the appropriate response to it would depend on factors like public vaccine uptake and the emergence of new variants of the Sars-CoV-2 virus.

No recent press releases from the department of health predicted increased lockdown restrictions. The ministerial advisory committee on Covid-19 (MAC), a body of experts meant to guide the government in creating policies to manage the pandemic, had not advised that alcohol sales be suspended.

In a series of recommendations on mitigating the impact of Covid-19 during recent municipal elections published 23 September, MAC did suggest limiting alcohol sales on election day on 1 November.

In another advisory from 23 September, MAC wrote that “although the link between alcohol use and trauma caseload is well-established, a return to normal selling hours is justified”.

Pick n Pay has not warned shoppers to stock up

At the time of writing Pick n Pay had not suggested on social media or in media releases that a restriction on alcohol sales was likely over the 2021-22 festive season.

However, the company has broadly objected to restrictions, citing massive profit losses.

In the company’s most recent update to investors, broadcast 20 October 2021, Pick n Pay chairperson Gareth Ackerman encouraged the South African government to “resist the temptation to reach again for restrictions on alcohol sales”.

But Ackerman cited “a concern that liquor restrictions are being put in place for the local elections”.

The Beer Association of South Africa has also called on the government not to restrict alcohol sales in future, but no alcohol traders in the country have suggested that alcohol sales would be restricted in the near future.

Africa Check could not confirm where or when the photo of the Pick n Pay branded poster was taken. It may have been printed in anticipation of previous restrictions, but it is not proof you should stock up on booze in November 2021.