The tweet ends with “Vuka Darkie!”, which roughly translates to “wake up black person”.

Mngxitama is a former member of the Economic Freedom Fighters political party. He represented the party in parliament until it expelled him in 2015.

In 2019 BLF was deregistered as a political party and not permitted to contest elections because it does not allow white people to become members.

Is there a “technology of mass destruction” called HAARP, which allows “them” to control the weather? We checked. 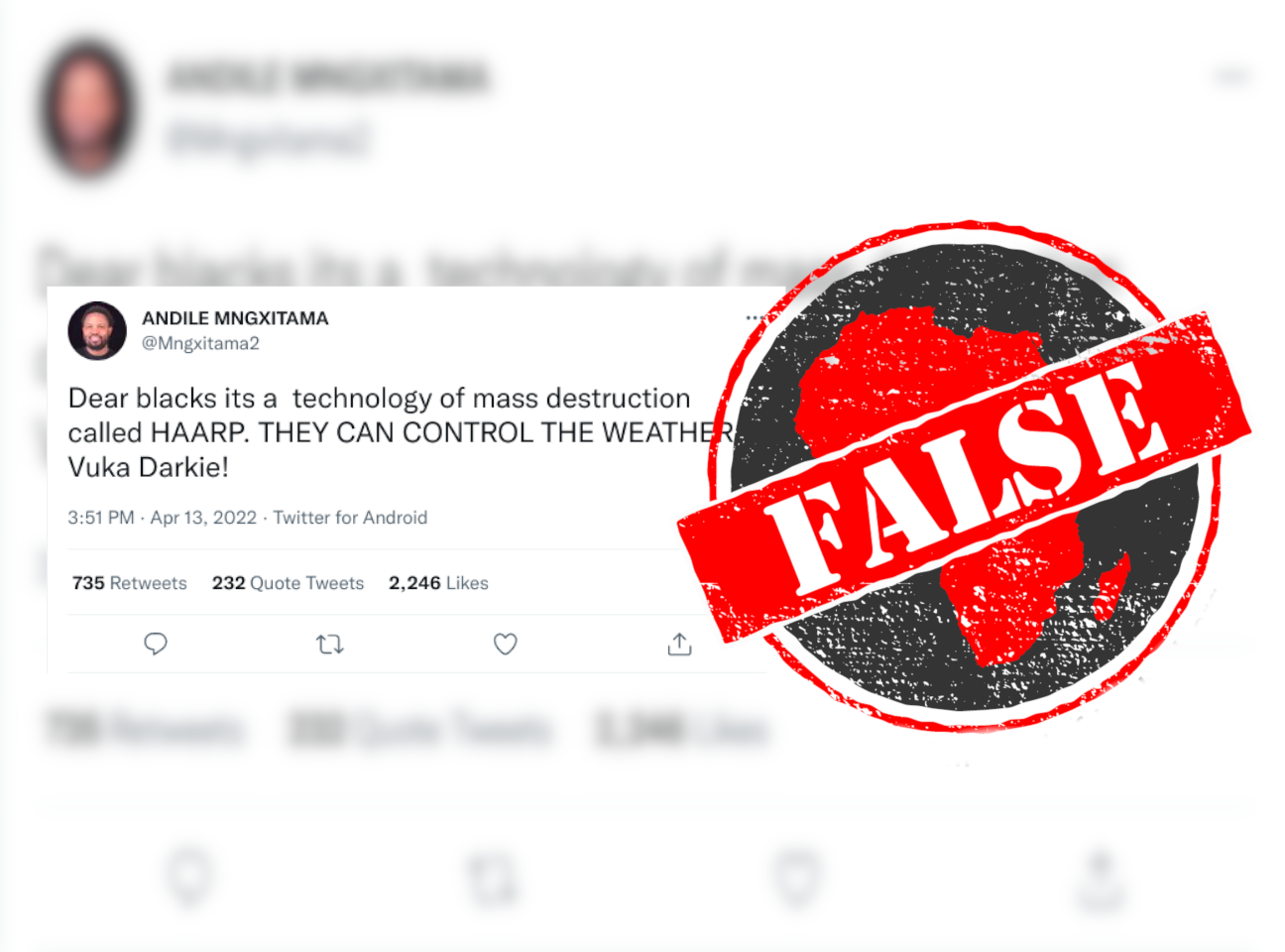 HAARP has ‘no way to control the weather’

The High-frequency Active Auroral Research Program, or HAARP, is a project of the University of Alaska Fairbanks in the US.

The programme studies the properties and behaviour of the ionosphere. The ionosphere is a region that stretches roughly 50 to 400 miles (80.5 to 645 kilometres) above the Earth’s surface and forms a boundary between the atmosphere and space.

The project transmits high-frequency radio waves into the ionosphere. The ionosphere partially absorbs the waves, speeding up its electrons and making them briefly heat up.

This effect can be detected in the ionosphere for short periods, from less than a second to 10 minutes. Researchers then analyse how radio waves interact with electrons in the ionosphere, allowing them to study natural phenomena like the aurora borealis or northern lights.

HAARP has been the subject of conspiracy theories before, with false claims that it can control the weather and people’s minds, and caused an earthquake in Haiti. These claims have been debunked many times.

HAARP only produces small heating effects on the atmosphere and can’t affect the weather.

In the programme’s FAQ section the university states: “Radio waves in the frequency ranges that HAARP transmits are not absorbed in either the troposphere or the stratosphere – the two levels of the atmosphere that produce Earth’s weather. Since there is no interaction, there is no way to control the weather.”

Robert McCoy, director of the Geophysical Institute at the University of Alaska Fairbanks reportedly told Climate Feedback: “The facility is operated only a few hours each year. The amount of high-frequency energy coming from amateur radio operators around the world almost certainly exceeds transmissions from HAARP.”

HAARP is an existing programme that uses radio waves to study particles in the ionosphere. But it is not a “technology of mass destruction” and can’t be used to control the weather.