A Facebook post published on 7 June 2022 shows a photo of the front cover of a newspaper called the Irish Light with the headline: “Heart disease in children explodes since vaccine.”

The image is poor quality so it is difficult to make out what the article says, but it includes a photo of a child covering their face while it looks as though someone is about to inject them with a needle.

In South Africa the photo was posted with an Afrikaans caption: “Ek begin te wonder of ons malletjies soos ons genoem is, rerig so mal is.”

This translates to: “I'm starting to wonder if us crazies, as we are called, are really that crazy.”

The photo has been reposted on Facebook over 1,500 times since it was first published.

But has heart disease in children “exploded” following the Covid-19 vaccines? We checked. 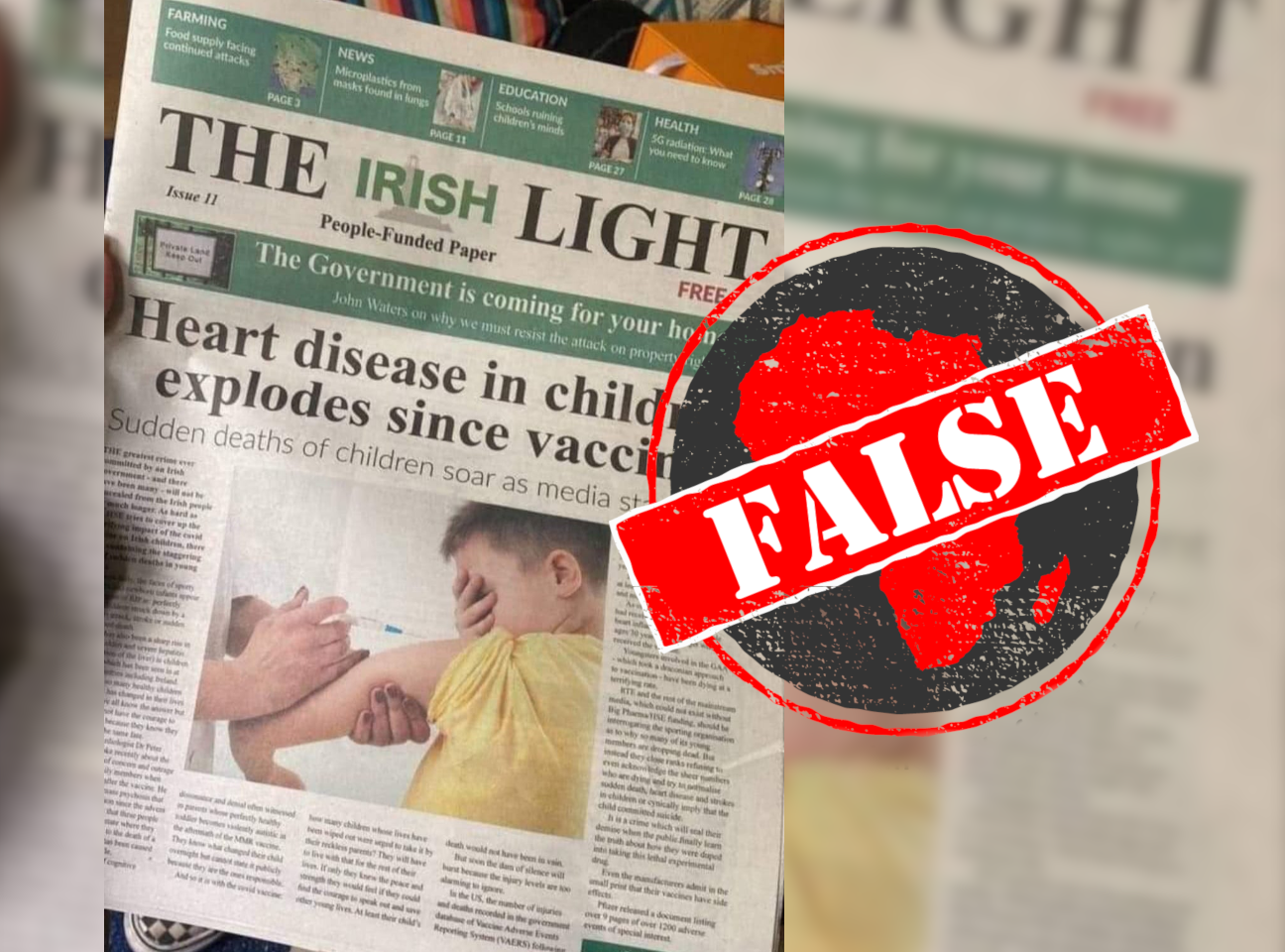 The Irish Light calls itself a “people-funded” paper and is available for free in Ireland. It has been flagged by other publications for promoting conspiracy theories regarding the Covid-19 vaccine.

A clearer version of the front page of its undated 11th issue is available on its website, where the issue is also available for download. From looking at the other front pages of the paper, it appears the Irish Light has mostly published stories about the Covid vaccines.

The article, which uses emotive language, makes little reference to the source of its startling claims. It claims that there has been a rise in children dying of heart attacks, strokes and sudden death and links these to the “covid vaccine”,

The article also compares the effects of the Covid-19 vaccine to the MMR vaccine and claims that “perfectly healthy toddlers” became “violently autistic” after taking the MMR vaccine. But this is not accurate and is a red flag that the article is misleading.

The MMR vaccine is the vaccine against measles, mumps and rubella given to children between one and 12 years old in many parts of the world, including South Africa.

The Irish Light also claims that in the US “as of March 24, 2022, VAERS had received 2,321 reports of heart inflammation among people ages 20 years or younger who received the vaccine”.

The vaccine adverse event reporting system, or Vaers, is a system developed by the US Centers for Disease Control and Prevention (CDC) and the Food and Drug Administration (FDA).

Vaers was introduced in the mid-1980s to allow people in the US to report adverse events after receiving any vaccination, but has received much more public attention since the introduction of Covid-19 vaccines.

“Some reports to Vaers might represent true vaccine reactions, and others might be coincidental adverse health events not related to vaccination at all.”

Correlation does not mean causation.

As Africa Check has previously reported, the CDC says: “Other than rare reports of severe allergic reactions, analysis of Vaers reports has not detected any patterns that would indicate a safety problem with Covid-19 vaccines.”

Medical experts have identified myocarditis, or inflammation of the heart muscle, as a rare side effect of mRNA vaccines. This side effect has mostly been seen in male teenagers and young adults. It is thought to be caused by an exaggerated immune response to the vaccine.

“When children develop myocarditis after Covid-19 infection, it’s typically much more severe than when it occurs post-vaccine,” said Dr Matthew Elias from the Children’s Hospital of Philadelphia in the US.

Prof Rik De Decker is a paediatric cardiology professor in the department of paediatrics and child health at the University of Cape Town and the director of the cardiac catheterisation lab at the Red Cross Children’s Hospital, also in Cape Town, South Africa.

De Decker told Africa Check that there had been an increase of multisystem inflammatory syndrome in children or MIS-C following Covid-19 infection “but not by a very high number”. MIS-C is a condition where different parts of the body become inflamed, including the heart, lungs, kidneys, brains, and gastrointestinal organs.

He added that the increase of MIS-C cases were “definitely due to the virus” as children under 12 were unable to get vaccinated against Covid-19 in South Africa.

“No cardiomyopathy has been associated with the vaccine in older children or adults,” he said.