Maimane took over from Leon’s successor Helen Zille in 2015, but stepped down as leader and left the DA in October 2019. The party’s current leader is John Steenhuisen.

Leon’s comment was in an April 2021 interview with local website News24. It has been described as “careless, racist, and dehumanising” by both current DA members and Maimane himself.

The outcry has also hit social media. In the debate, Facebook and Twitter users have shared an article in which Zille also appears to say Maimane’s election as DA leader was a mistake.

Its opening paragraph reads: “My biggest mistake in DA was to contribute in promoting Black leadership in DA and propelling both Mmusi Maimane and other Black provincial DA leaders to the echelons of power within DA. By doing so I lead DA to the trap of racial politics and promotion of skin colour over skill and talent.”

But while the article was written by Zille, its headline and first paragraph were not. 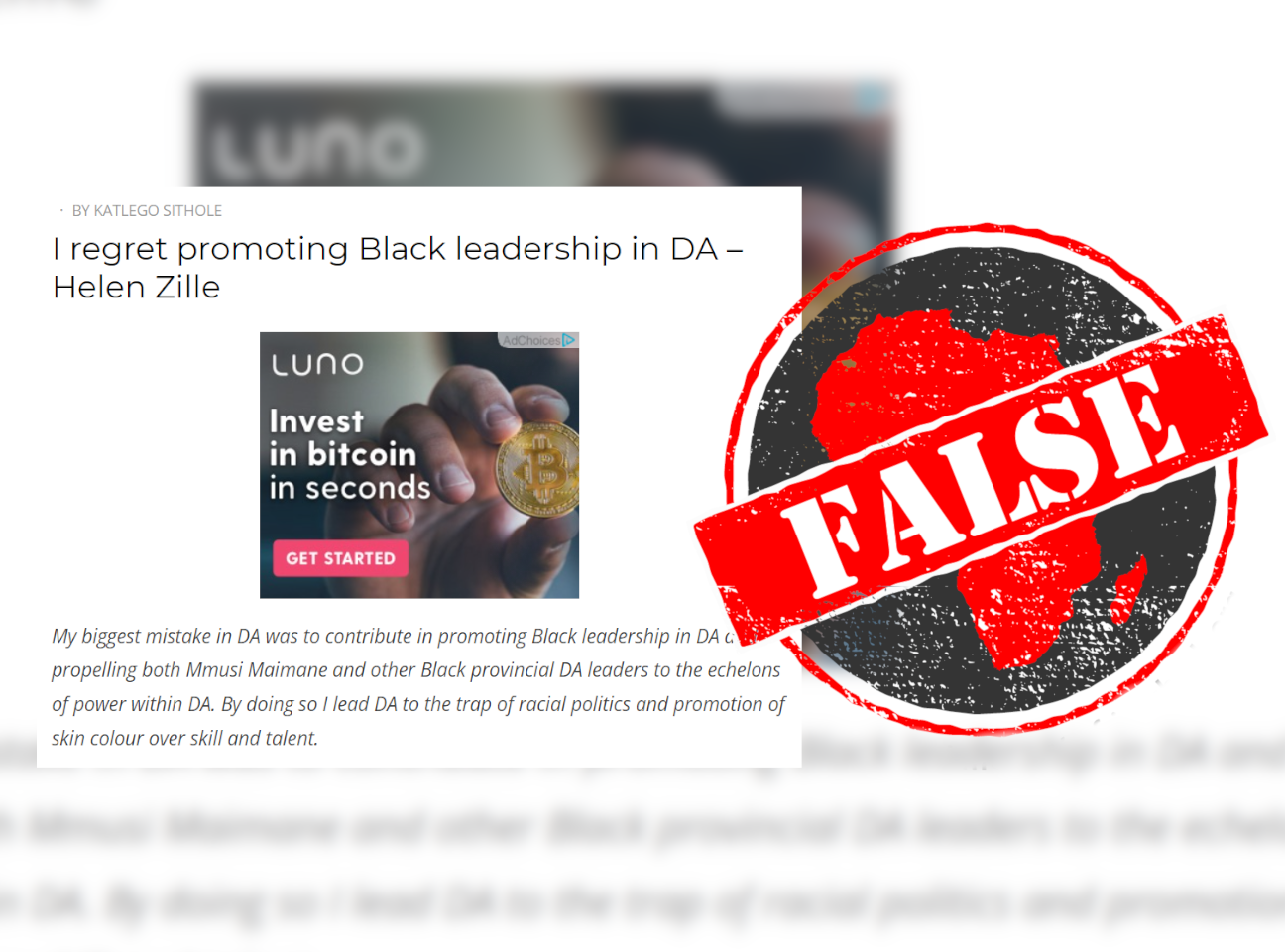 The rest of the article is taken from Zille’s opinion piece “Where I went wrong”, published  on PoliticsWeb on 27 May 2019. It appeared the day before in Afrikaans under the headline “Helen Zille: Dit was my fout” (“Helen Zille: It was my mistake”) in Rapport, a South African newspaper.

In the original, Zille doesn’t specifically explain how she thinks she “went wrong”. She instead says she played into a “race narrative”. But she argues that this narrative was created by the ruling African National Congress (ANC) and South Africa’s second official opposition party, the Economic Freedom Fighters.

Zille says the “treacherous path of trying to satisfy our ANC opponents on the issue of race” began with “the conscious pursuit of diversity”. She adds that she was wrong to think that the DA would be able to shake off the accusation of being a “white party” if it were “led by a black person, and backed by a significant majority of elected black provincial leaders”.

Zille does not mention Maimane in either the English or Afrikaans versions of the opinion piece. She adds that “this self-criticism is not intended as a negative reflection on any of the DA’s black leaders”.

Search67 is owned by Anthony Matumba, who works for the Makhado municipality in South Africa’s Limpopo province. Matumba is a member of the Economic Freedom Fighters. In a July 2020 investigation, the Atlantic Council’s Digital Forensic Research Lab (DFRLab) found that Matumba not only runs Search67, but several other websites that regularly post disinformation.

The byline on the Search67 article is “Katlego Sithole”, a fake name Matumba has admitted he uses to upload articles to the site.

Matumba was also found to be operating several social media accounts, including a popular Twitter account using the name “Tracy Zille”. This regularly published divisive political content to drive traffic to Matumba’s various websites. It is likely that Matumba was earning advertising revenue from the websites.

Matumba told news site IOL in July 2020 that he was considering shutting down Search67, but the site is still up. Both the site and accounts like “Tracy Zille” are still actively posting misleading information.

Johannesburg not the only mayoral committee with 50% women

Does the DA create 'change that moves SA forward'? We weigh up key claims

Do 774 South Africans become jobless every day, as the DA says?