IN SHORT: Some substances extracted from pineapples may help treat less serious conditions, but they are not the same as “hot pineapple water” – which definitely doesn’t cure cancer. The dangerous claim simply rehashes old (untrue) advice that “hot lemon water” cures cancer.

Bogus medical advice can be dangerous. False “cures”, even if they aren’t actively harmful, can discourage sick people from seeking real medical help. This is the danger of a widespread online claim that “hot pineapple water” can “cure cancer”.

The claim has been posted on Facebook and, several times, on the crowdsourced news site Opera News. It’s similar to other claims Africa Check has debunked: that particular diets, home remedies, and (in some especially strange examples) “snail water” can cure or prevent illness.

A typical version begins with: “Professor Chen Huiren of the Beijing Army General Hospital emphasized that if everyone who receives this newsletter can take ten copies to others, at least one life will surely be saved.” Beijing is the capital of China.

The posts claim that a few slices of pineapple in a glass of hot water will release “amino acids and polyphenols” as well as “several anti-cancer substances” that kill germs, toxins, and “violent cells”. We looked into it. 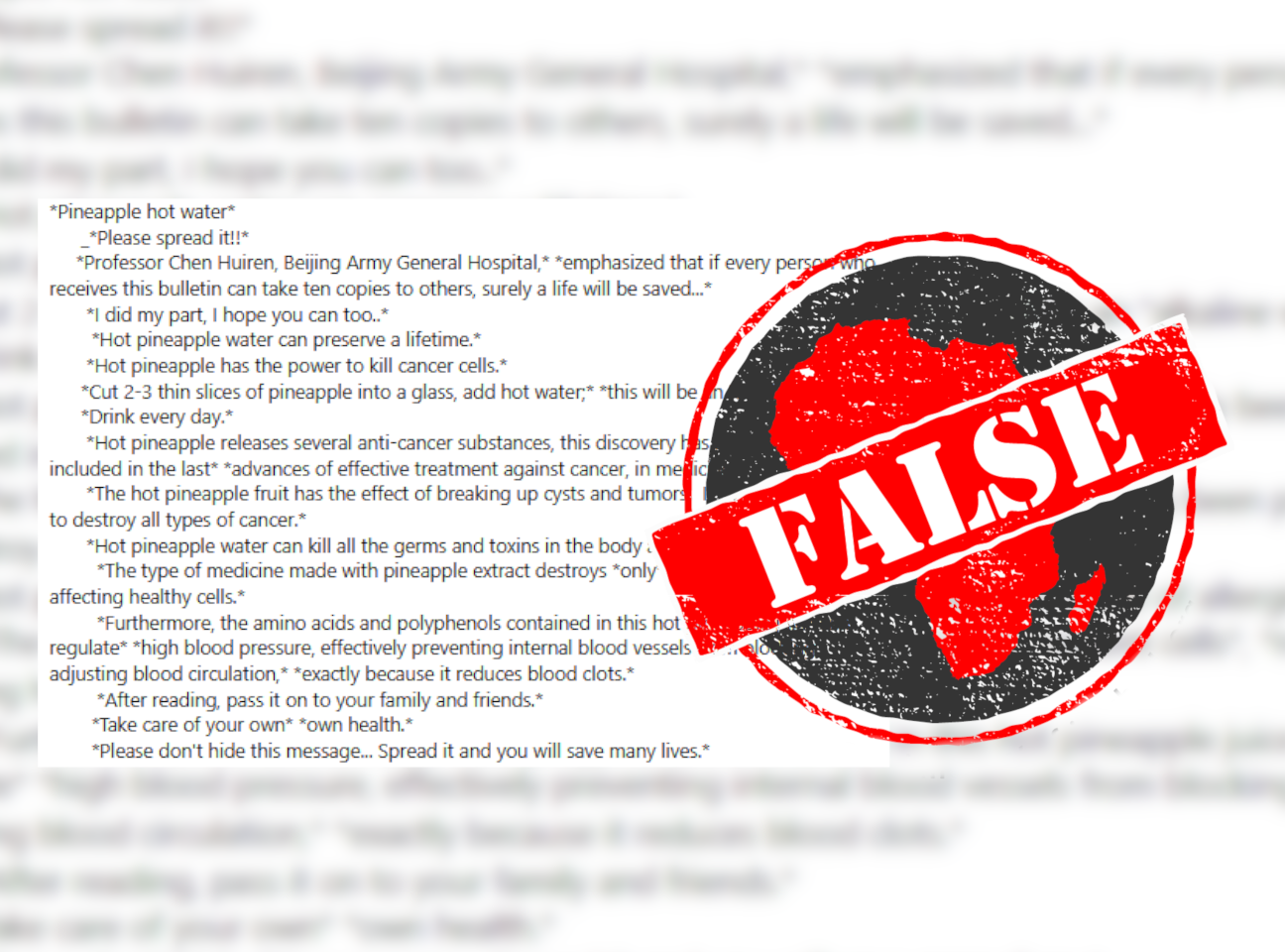 Pineapples do contain cancer-fighting enzymes – but ‘pineapple water’ no ‘cure’

Surprisingly, there is some science to this claim. Pineapples do contain substances associated with cancer treatment, including an enzyme named bromelain.

The United States National Center for Complementary and Integrative Health (NCCIH), which studies medical practices outside of conventional Western medicine, says bromelain is “promoted” as a dietary supplement for diseases such as cancer.

But this doesn’t mean that “pineapple water” can “cure” cancer, and there is no evidence for the post’s other claims.

The NCCIH does not provide any sources that suggest that bromelain effectively treats cancer. Some of its sources do say the enzyme may be used to treat burn wounds, and there are weak indications that it may aid recovery after dental surgery. But this doesn’t mean it can cure other diseases.

More than this, while the bromelain used in medicine may be derived from pineapples, it isn’t just “pineapple water”.

Similarly, there is some evidence that a group of chemicals known as polyphenols can reduce the risk of developing many types of cancer, and potentially slow the growth of cancerous cells. But this is very different from being able to prevent or cure cancer.

As with bromelain, polyphenols can be extracted from pineapple skin, and have been shown to have some benefits including antioxidant properties. As we’ve explained before, antioxidants have been thought to minimise the risk of developing cancer, but large scale trials on humans have typically shown no such benefits.

And there is no evidence that simply eating pineapple, or drinking water in which the fruit has been steeped, will reduce cancer risk or cancerous cell growth.

The only source quoted in support of the claim is “Professor Chen Huiren, Beijing Army General Hospital”.

Chen is a real person, but has not said anything about “pineapple water” curing cancer. In fact, the entire message seems to have been copied from a 2018 version, which claimed that “hot lemon water” – not pineapple water – could cure cancer. AFP Fact-Check debunked the lemon water claim in 2021.

In its fact-check, AFP quoted a 2018 interview with Chen, who said: “My major is haematology [the study of blood and related tissues]. I have not done any special research on anti-cancer food, nor have I published articles on anti-cancer foods on the internet and WeChat.”

Newer claims that swap lemon water for pineapple water are just as false, and have been debunked by fact-checking organisations such as Pesa Check and AFP Fact-Check.