IN SHORT: Did Nigerian presidential candidate Bola Tinubu meet US president Joe Biden in the White House in late November 2022? No, the claim is based on a badly doctored photo.

An image of Bola Tinubu, the presidential candidate for Nigeria’s governing All Progressives Congress, sitting with US president Joe Biden has gone viral on Twitter and Facebook.

A Twitter user pointed us to a tweet with the image and asked Africa Check to verify it. The tweet claims it shows Tinubu meeting Biden on 29 November 2022.

“Happening now: @officialABAT on a courtesy visit to US President Joe Biden as part of his US on international engagements. Obidiots say Tinubu cannot visit US based on his indictment. He is there right now live with the US President. Let your Obi visit too. Mumu pipo,” the tweet reads.

“Obidiots” is an insulting name given to supporters of Peter Obi, the Labour Party’s presidential candidate. “Mumu pipo” is pidgin for “stupid people”.

Nigeria is set to hold general elections, including for the president, in early 2023. Tinubu and Obi are among the leading candidates for the top job.

Tinubu’s candidacy has stirred many controversies, including his alleged involvement in a drug trafficking and money laundering case in the US back in 1993.

His campaign has denied this.

But did Tinubu meet Biden in the White House? 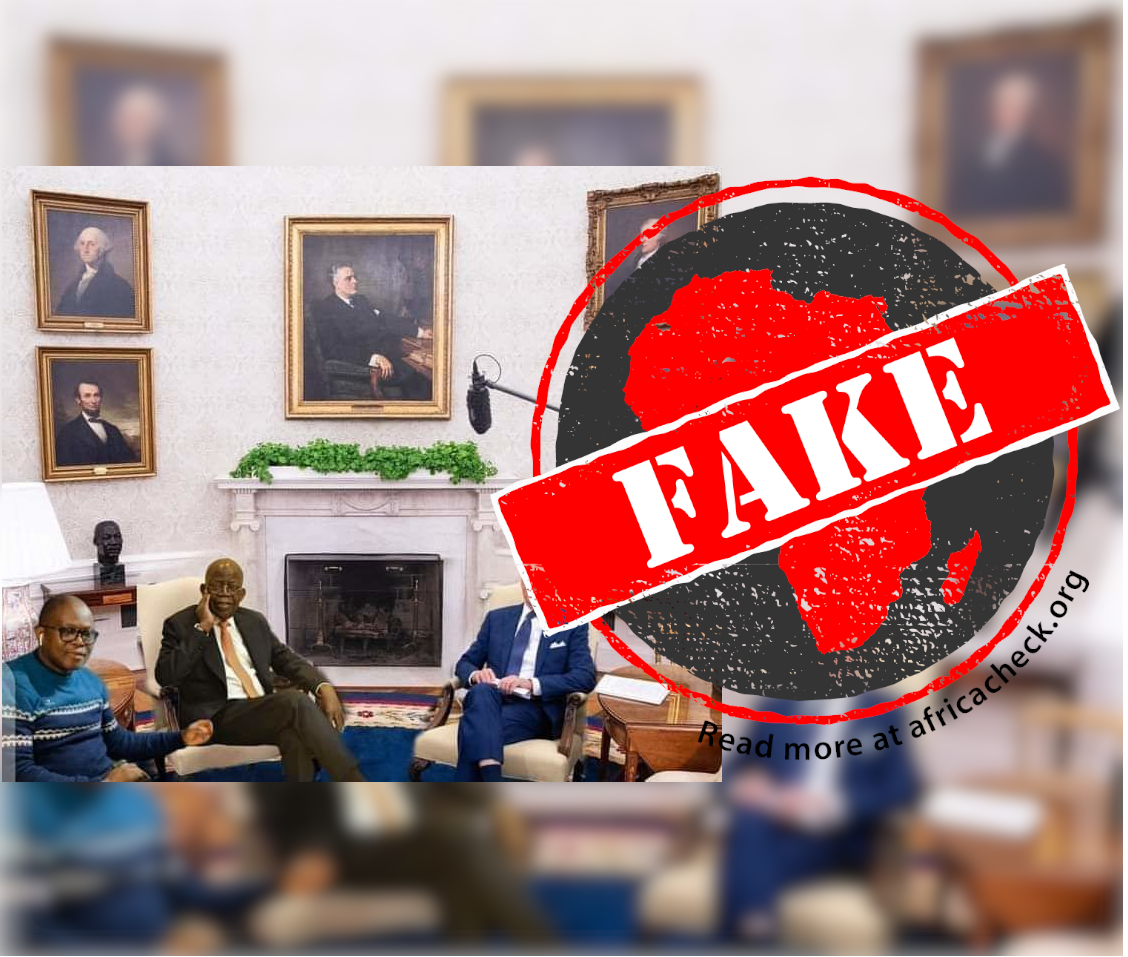 In verifying the viral image, we saw some telltale signs that it had been doctored.

There are significant variations in picture quality, with the part around Tinubu and the man sitting next to him looking blurry. Objects behind Tinubu have their edges rough and overlapping in a way that is unnatural.

This is a red flag because photos of visits to the White House, the official residence of US presidents in Washington DC, are always of good quality. Professional photographers are used for all official engagements.

The APC’s presidential campaign council has debunked the claim that Tinubu met with Biden.

A statement by Bayo Onanuga, the council’s director of media and publicity, blamed opposition parties for the misinformation. At the time the image was supposedly snapped, he said, Tinubu was in Abuja, Nigeria’s capital.

“A viral photograph showing Asiwaju Bola Ahmed Tinubu and United State President, Joe Biden in talks at the White House is the latest in the series of misinformation being dished out by the political opposition,” the statement reads.

“We cannot just fathom the purpose of the mischief and the falsehood, which emanated from the rabid followers of Peter Obi. The apparently photo-shopped image surfaced Tuesday night, on the heels of news that Asiwaju Tinubu will embark on a foreign trip this weekend.”