Africa Check has debunked several versions of the claim that inhaling hot steam, sometimes from boiling fruits or vegetables, can cure Covid-19.

The misleading claim has even been spread by a former Tanzanian president and a South African political party’s youth league.

A new version of the claim, in Afrikaans and attributed to “Dr Marisa Emeg”, has been posted several times on Facebook in South Africa.

It instructs readers: “U moet die virus doodmaak in die neus met stoom.” This roughly translates to: “You must kill the virus in the nose with steam.” It also claims that different temperatures of steam will have different effects.

In particular, it claims that “Teen 60°C is hierdie virus so swak dat enige menslike immuniteitstelsel daarteen kan veg. By 70°C sterf hierdie virus heeltemal.” (“At 60°C this virus is so weak that any human immune system can fight it off. By 70°C, this virus is totally destroyed.”)

But who is Dr Marisa Emeg, and is this advice any better than the similar claims we’ve previously debunked? 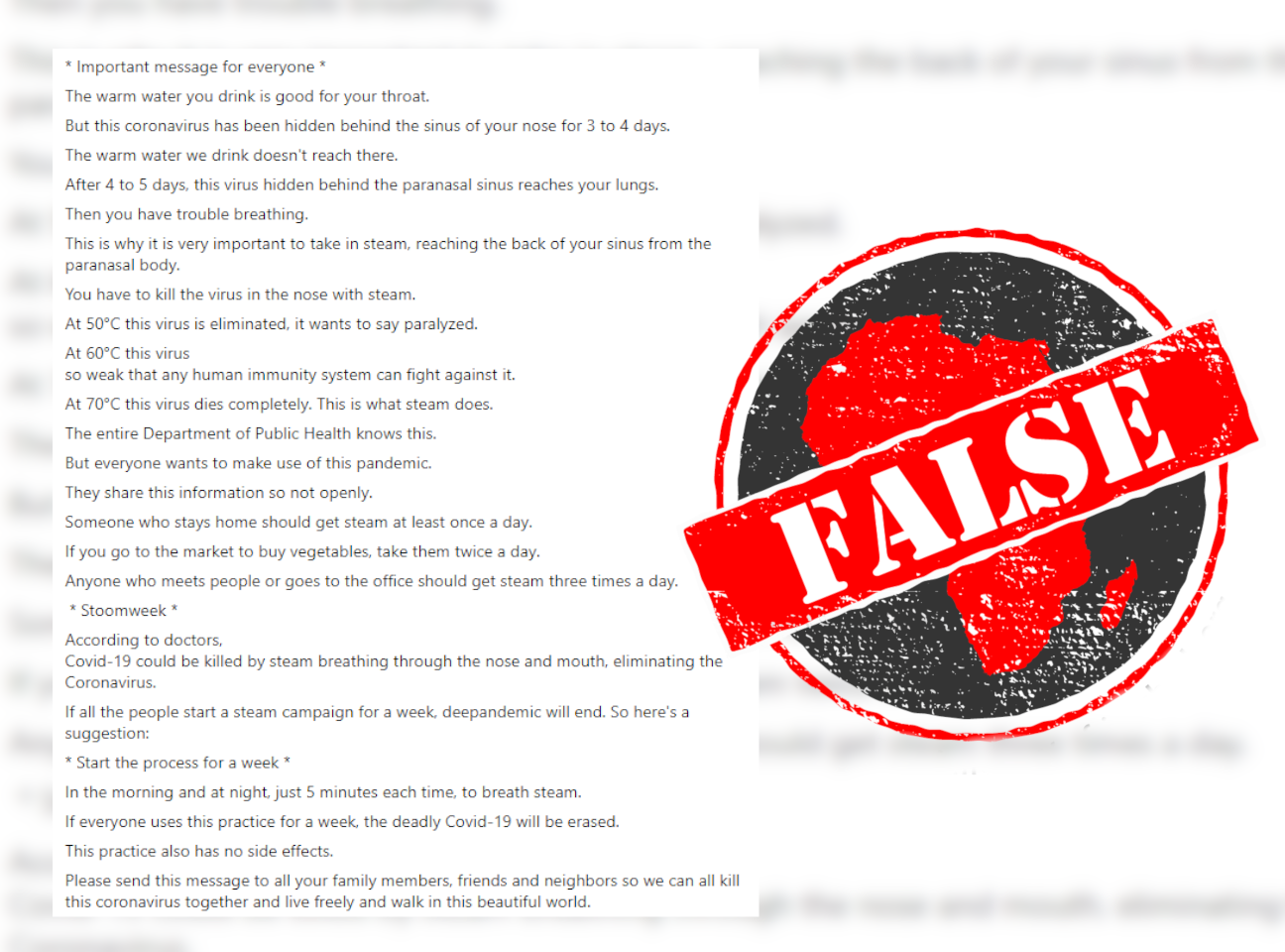 Translation of older post, copied several times – in multiple languages – over many months

The mention of “Dr Marisa Emeg” led us to an earlier version of the claim, written in English.

It was shared to Facebook on 3 January 2021, but seems to have been copied from a chat on the messaging app WhatsApp.

It suggests that the claim was originally shared on WhatsApp, but doesn’t mean that it was written or even shared by a doctor. A person can choose to save a contact under any name on their cellphone or in the WhatsApp app, so the name “Dr Marisa Emeg” could be a nickname or pseudonym – or simply made up.

Africa Check could not find any evidence online of a person by the name “Marisa Emeg”, doctor or otherwise.

A Google search led us to a debunking of the same claim, attributed to the same name – but written in Portuguese, spreading on WhatsApp in Brazil in April.

And even if Marisa Emeg is real, she likely didn’t write the original message. WhatsApp does not include warnings that a message has been forwarded in copied text, or show who the original author was. Instead, it attributes the message to the person who forwarded it. So someone by this name could simply have forwarded the message.

This message seems to be a copy of much older misinformation. Africa Check found near-identical messages informing people that “you have to kill this virus in the nose with steam” as far back as 24 September 2020. These posts also claimed that the Sars-CoV-2 virus was weakened at 60°C and destroyed at 70°C.

At some point, the message was translated into Afrikaans, and began to spread on Facebook in May 2021, at least seven months after the claim first appeared.

Hot steam can cause injury

As Africa Check and other fact-checking organisations have noted, inhaling hot steam does not prevent Covid-19.

We have said in the past that inhaling steam as hot as 70°C is dangerous and could cause serious burns. Tsumoru Shintake, a professor at the Okinawa Institute of Science and Technology in Japan, warned us that temperatures in the nasal cavity range between 32 and 34°C. Inhaling hot steam could damage epithelial cells in the nose.

The virus in infected individuals is within cells and will not be reached by steam, he said.