“LEOPARD IN MURANGA SIGHTING,” reads the subject line on what appears to be a press release by the Kenya Wildlife Service (KWS), circulating on Facebook.

The document says the service “cautions the public in Mathioya, Kiharu and Kangema in Murang’a county of a stray rogue leopard roaming in the above-mentioned areas”.

Murang’a is a county in central Kenya, and the towns named in the document are highly populated. Whether it’s true or not, the warning could cause panic among people living in the towns.

The document advises people to stay indoors until the cat is captured.

One user who posted it on Facebook linked it to Kenya’s 2022 elections. They commented: “Deep State imeamua kuachilia Leopardz to roam around in Murang'a County to scare voters in William Ruto Strong hold.”

Ruto likes to portray himself as a champion of the poor. Part of his campaign messaging has been that there is a shadowy and powerful “deep state” hell-bent on stopping him from becoming president.

The document is dated 8 August 2022. Kenyans voted a day later, on 9 August. The warning could have caused some Murang’a residents to stay indoors and not vote. There have already been media reports of this.

The Independent Electoral and Boundaries Commission has said just over 65% of Kenyans turned out to vote, sparking debate on the low turnout. In 2017, about 78% of registered voters cast their ballots.

Did the KWS really warn of a leopard on the loose? 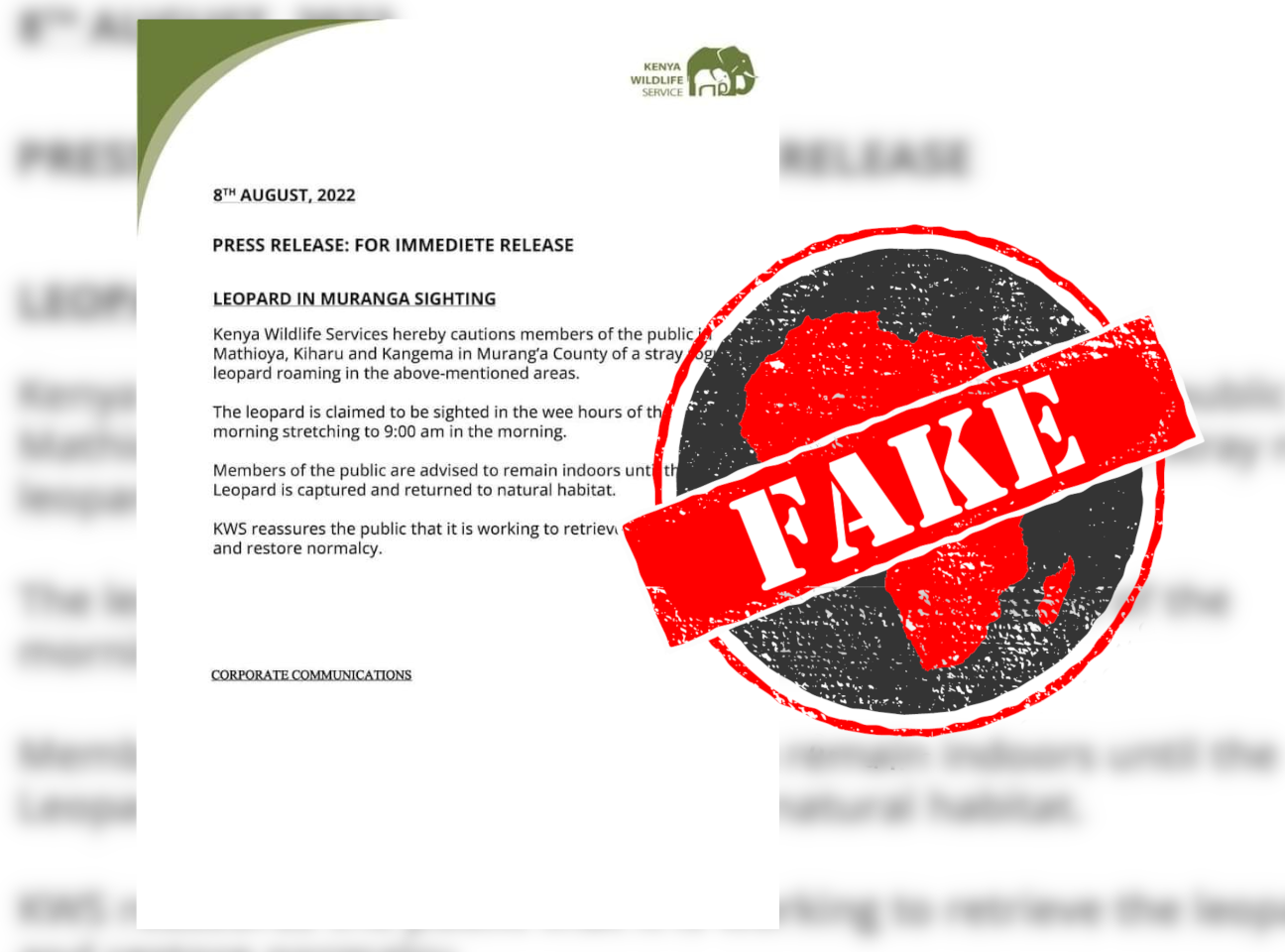 There are early signs that the document could be fake, such as its misspelling of “immediate” as “immediete”.

It also is written casually, unlike most communications from government agencies. For example, it says the leopard “is claimed to be sighted in the wee hours of the morning stretching to 9:00 am in the morning”.

On the day the document appeared online, KWS posted it on its official Facebook account – stamped “FAKE”.

“Fake Press Release on Leopard sighting in Murang’a County. In case of any wildlife incidences call us on our toll free number 0800 597 000 or our WhatsApp number +254726610509 for immediate intervention,” the post reads.

Election observers in Kenya have said the spread of false information was a significant concern.

“These include distortion, false information shared without malicious intent (misinformation) and those shared to deliberately deceive people (disinformation).”

Many Kenyans shared the fake press release to warn others. But before any information is shared online, it should be verified.