Dennis Itumbi, blogger and digital strategist for Kenyan deputy president and presidential candidate William Ruto, was abducted and tortured in late December 2021. After being found naked and “alive but badly fractured after six hours of torture”, he was admitted to hospital.

In January 2022, two photos of Itumbi started circulating on Facebook as evidence of a claim that he was faking his injuries.

In the first photo he’s seen in a hospital gown with a walker brace on his right leg and a cast clearly visible on his left leg. His bandaged left arm is in a sling.

The second photo shows him in a shirt and trousers, the brace on his left leg and the trousers covering what seems to be the cast on his right. And this time, his right arm is bandaged.

Meta’s fact-checking system indicates that at least one of the posts was shared more than 560,000 times in just 14 hours.

“Ever since ‘abduction,’ looks like Dennis Itumbi wakes up each day with a different broken leg. In other words, the injury switches from one leg to the other like a light switch,” one caption to the photos reads.

The UDA is Ruto’s United Democratic Alliance, a political party Itumbi has been drumming up support for ahead of Kenya’s August 2022 elections.

But are the photos evidence that Itumbi’s injuries switched sides, indicating they weren’t real? 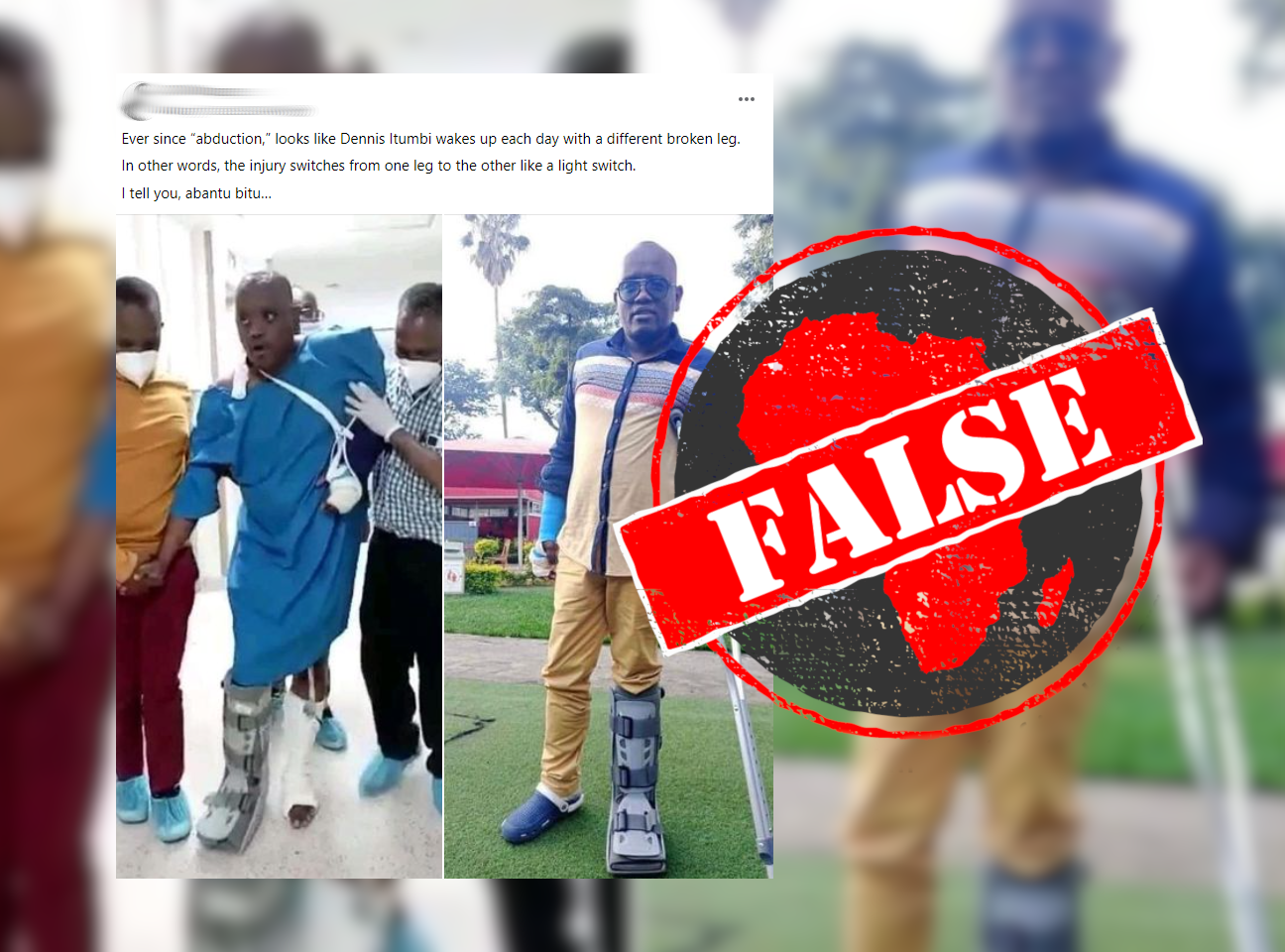 A Google reverse image search of the first photo reveals that it’s been online since at least 1 January. Kenya’s NTV channel tweeted it in a report on Itumbi’s discharge from hospital.

Dennis Itumbi has been discharged from hospital: Wanjohi Githae, Director of Communications - UDA

The tweet links to a video of Itumbi, in a hospital gown, being supported by two people as he slowly walks down a corridor. The brace is on his right leg, the cast on his left, and his bandaged left arm is in a sling.

The video was tweeted by David Itumbi, Dennis Itumbi’s brother, on 31 December.

We thank God my brother @OleItumbi has made tremendous improvement. 24 hours after release from ICU he was walking on his two feet though he needed support. It's now path to recovery. God willing he should be out of hospital soonest. pic.twitter.com/cTS4jcO2Lq

And on 18 January, senator Karungo wa Thang'wa tweeted a demonstration of why the claim is false. The second photo was, simply, flipped. His tweet begins with: “Photoshop class. (2 mks)”.

In other photos of Itumbi published by credible news sources, the walker brace is on his right leg, his left leg is in a cast and his left arm is bandaged.

On 18 January, Itumbi updated his Facebook page cover photo, showing him sitting with Ruto. The brace is on his right leg.

Itumbi was injured, and the flipped photo is no evidence that he wasn’t.

Africa Check has debunked other false claims that use the easy Photoshop technique of simply flipping a photo horizontally.