In late March 2022 it was reported that the Kenya Assemblies of God (KAG) church near Eldoret in Uasin Gishu county was appealing for donations for reconstruction after it was destroyed in the violence following the 2007 elections.

Soon after, a graphic quoting Kapseret constituency legislator Oscar Sudi warning that it should not be rebuilt in the area went viral.

“As long as I am alive, Kiambaa KAG Church will not be re-built here,” the quote reads.

It adds in Kiswahili: “Wakwende wakaijenge huko Gatundu kuna mashamba pia.” This means: “Let them go and rebuild it in Gatundu. We have pieces of land there too.”

The church was set on fire in January 2008, killing at least 30 women and children sheltering there. They were believed to be from the Kikuyu community. The attackers were Kalenjin.

President Uhuru Kenyatta is Kikuyu and comes from Gatundu, a small town in Kiambu county.

Sudi, a Kalenjin, is a close ally of deputy president William Ruto and a member of Ruto’s United Democratic Alliance. Ruto and Uhuru are political rivals despite having been elected on a joint ticket.

The graphic includes the logo and branding of Kenyans.co.ke. But did Sudi really say this, and did the news site quote him? We checked. 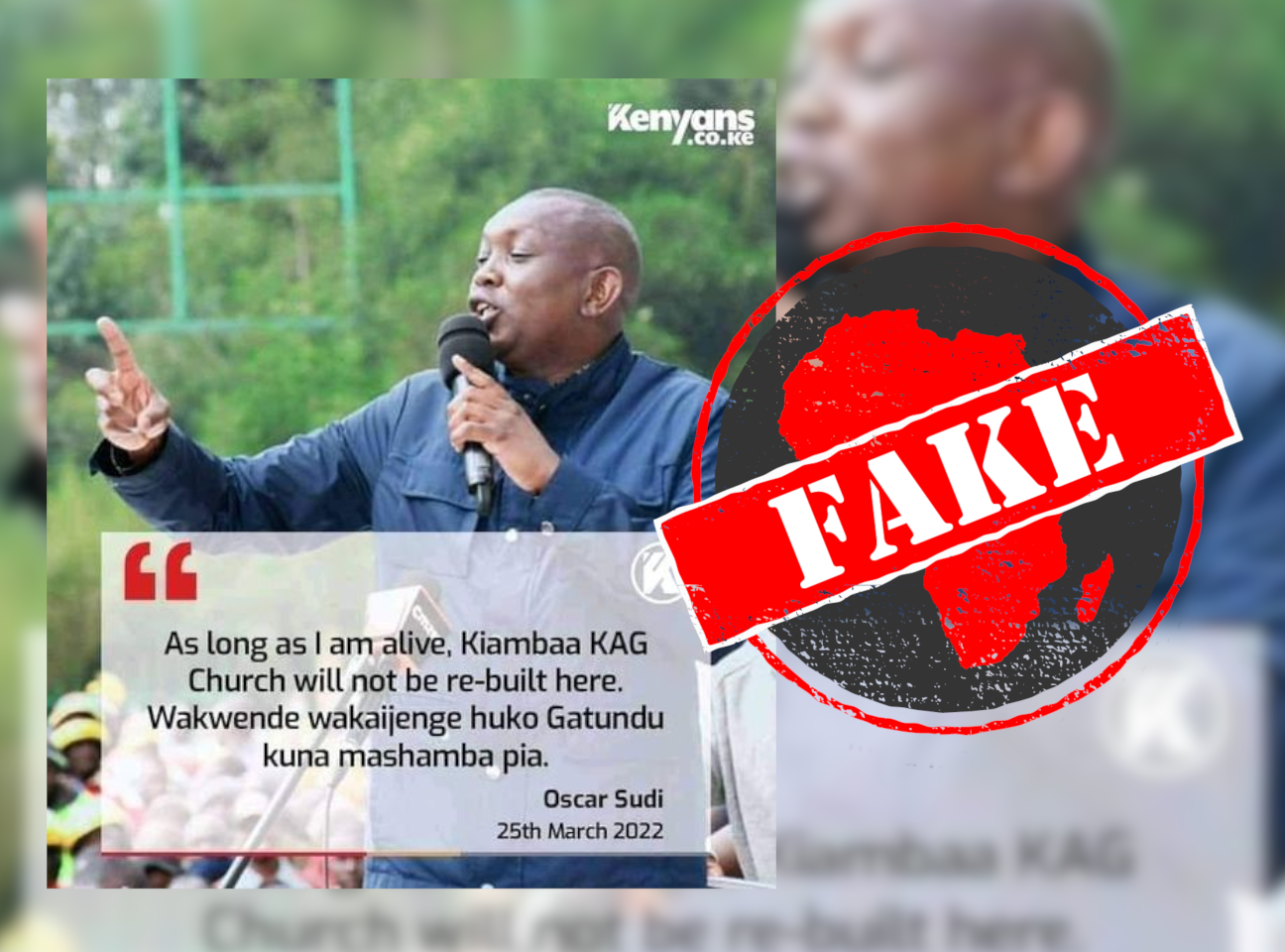 No reports of quote

With the memory of the election violence still fresh, such a statement would have been widely reported in the media and condemned across the country. But we could find no news reports on it, or any response to it.

The quote also doesn’t appear on Sudi’s active Facebook account where he regularly communicates to his followers.

We ‘flag it as fake’

On 26 March, Kenyans.co.ke took to social media to stamp the graphic as fake.

This post did not emanate from our media house. It does not conform to the in-house branding rules and did not go through the multiple approval checks set in place to prevent misreporting. pic.twitter.com/2S9hUwqxcJ

“This post did not emanate from our media house. It does not conform to the in-house branding rules and did not go through the multiple approval checks set in place to prevent misreporting. We, therefore, flag it as FAKE,” it said on Facebook and Twitter.