IN SHORT: Kenyan president William Ruto has previously been charged in the International Criminal Court. But has the man he defeated in the August 2022 elections, Raila Odinga, threatened to send him back there? No.

A video claiming that Kenyan opposition leader Raila Odinga has threatened to take president William Ruto back to the International Criminal Court (ICC) for electoral fraud has been published on Facebook.

This translates to: “Raila says he will take Ruto back to ICC for stealing his votes.” 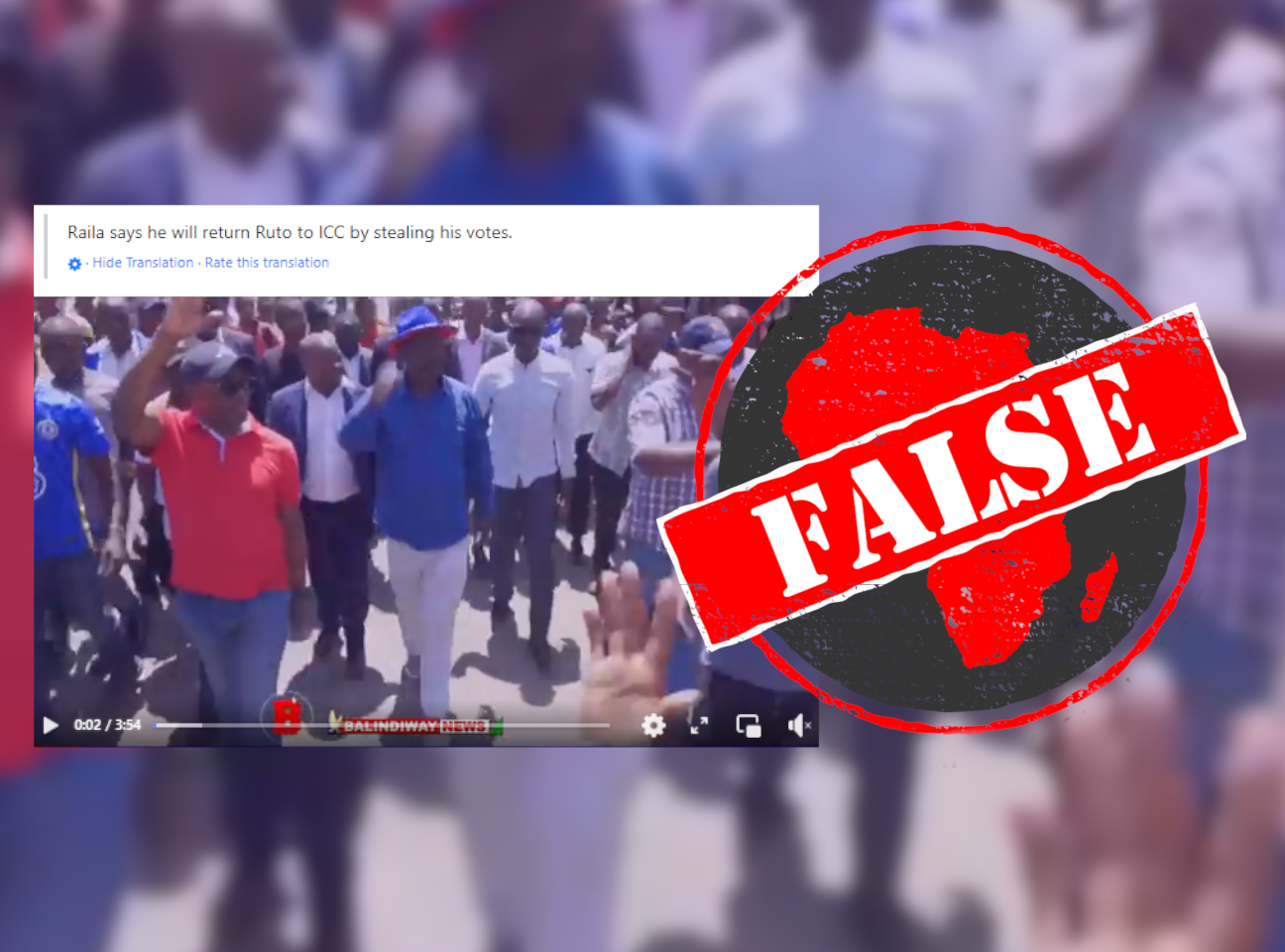 Kenya went to the polls on 9 August 2022. On 15 August, the Independent Electoral and Boundaries Commission declared Ruto the new president with 7,176,141 votes, edging out Odinga who received 6,942,930 votes.

Odinga rejected the results and contested them in court. However, the supreme court upheld Ruto’s win and he was sworn in on 13 September.

The ICC, located in The Hague, Netherlands, looks into allegations of the most serious crimes of concern to the international community, including genocide, war crimes, crimes against humanity and crimes of aggression. Where warranted, it brings cases against the accused.

Between 2011 and 2013 the ICC charged Ruto with three crimes against humanity: murder, deportation or forcible transfer of population, and persecution.

These crimes were allegedly committed during 2007-2008 post-election violence in Kenya. More than 1,300 people died and more than 300,000 others were displaced during this period.

The case against Ruto was however declared a mistrial in 2016 because of insufficient evidence, blamed on witness interference and intolerable political meddling.

Did Odinga really threaten to take Ruto back to the Hague following Kenya’s 2022 elections? We checked.

“The common Kenyan that they call ‘hustler’ is suffering and ‘hustler number one’ [Ruto] is going round the world in planes. He went to Europe for the burial of a dynasty [Queen Elizabeth II’s funeral], he went to America, he came back then went to Ethiopia, he has gone to Uganda, he has gone to Tanzania and spent KSh5 million in just one day.”

In the next part of the video, Odinga pleads with Kenyans to oppose Ruto's decision to lift a 10-year ban on the importation and cultivation of genetically modified organisms (GMO) and animal feeds.

Among Ruto’s promises for his first 100 days in office was that a KSh50 billion hustler fund to support small businesses would be quickly established.

Ruto also pledged that his administration would invest in agriculture to rapidly lower the cost of living.

Prior to Kenya's August 2022 presidential election, Ruto used the terms “hustler” and “hustler nation” as political branding during his campaigns.

Ruto positioned himself as a "hustler" to appeal to the country's majority of unemployed young people.

The video records Odinga calling out Ruto’s administration for unfulfilled promises. But there is no mention of the ICC. The video was given its controversial title as clickbait. Odinga makes no such threat to Ruto.

No, Kenyan senator Karen Nyamu not expelled from governing party