IN SHORT: A once powerful police chief is in the headlines as a new administration takes shape in Kenya. But the new minister for the interior did not astonishingly take the former spy cop’s side against his bosses, as a post claims.

A Facebook post reports that Kenya’s new cabinet secretary for the interior, Kithure Kindiki, has called out his bosses for victimising the former investigative head of the police.

The 16 November post from Kenyan website Daily Post reads:“It was wrong for RUTO and GACHAGUA to victimise KINOTI – Interior CS KITHURE KINDIKI now insinuates as things seem to be getting out of hand.”

It then links out to an article on the website.

Kenyan president William Ruto and his deputy Rigathi Gachagua have been in office since September, after they survived a court challenge to their victory in August 2022 elections.

George Kinoti resigned as the Director of Criminal Investigations (DCI) after the pair’s victory.

According to the article, Kindiki vowed that in his regime police officers would not face any victimisation like that of DCI Kinoti by the current administration.

The sloppily written article reads: “This is after he vowed never to victimise the police the way ex-DCI George Kinoti has been victimised by President Uhuru Kenyatta and his Deputy, Rigathi Gachagua.” The article ostensibly meant president William Ruto and not Kenyatta, who appointed Kinoti.

“Addressing the press on Monday, Kindiki told the police officers to do their duties diligently without any fear of victimisation. He assured the police that they won’t be victimised as long as they discharge their duties within the law.” 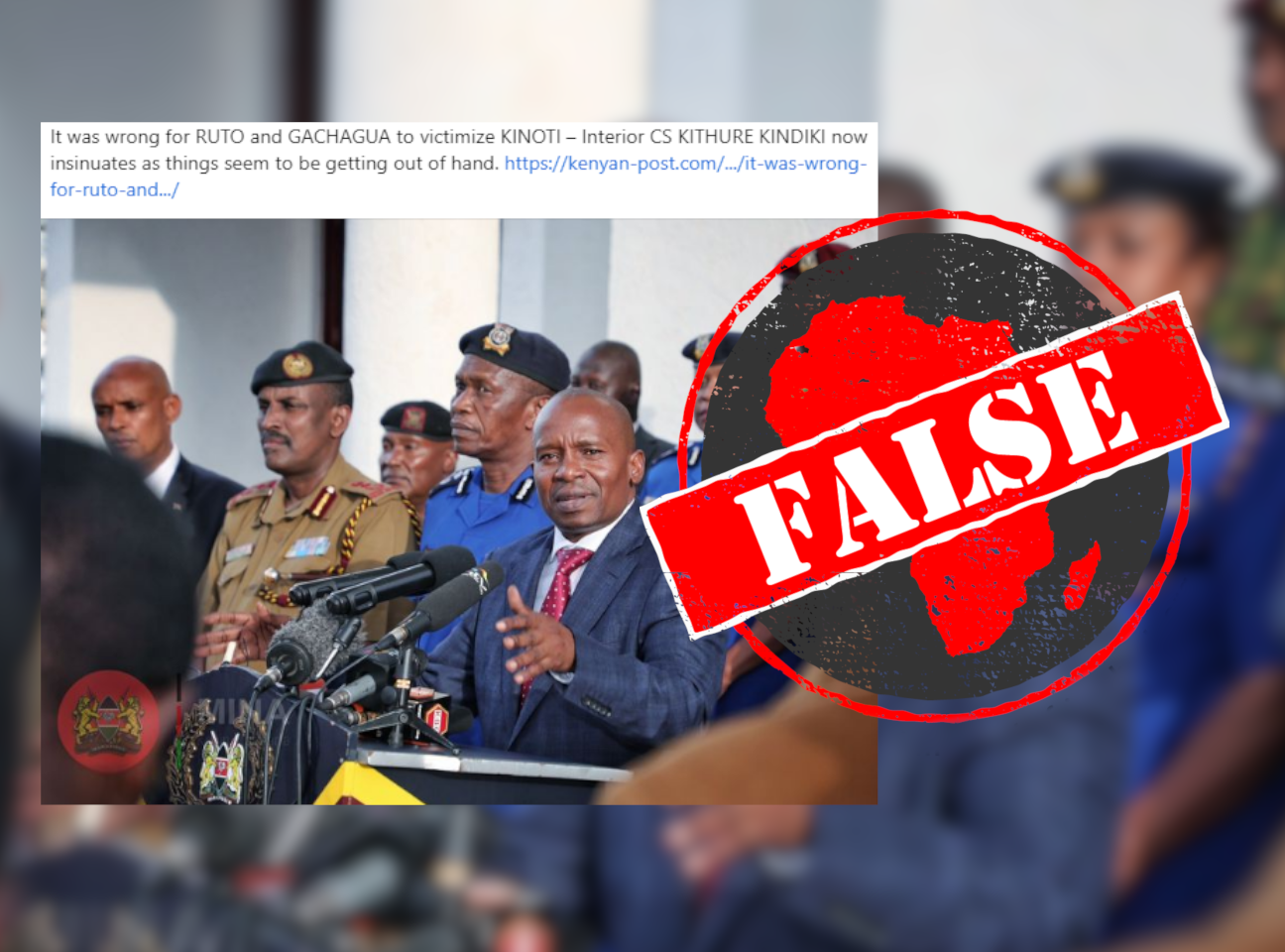 Despite leaving office, Kinoti has been a man under siege. Ruto accused Kinoti of using his position under Kenyatta to weaponise the fight against corruption.

Some senior police officers have since accused Kinoti of orchestrating corruption charges against influential politicians, including Gachagua.

But did Kindiki really call out Ruto and Gachagua for allegedly victimising Kinoti? We checked.

In a press conference on 14 November, Kindiki spoke to the press about the security situation in the country. The speech can be seen on YouTube.

At the video’s 9:39 mark, Kindiki assures police officers that they will not be victimised and urges them to perform their duties within the law.

He says: “I want to assure our officers who are in charge of the various formations related to internal security the government will support you, facilitate you, and make sure that as you perform this gallant, sometimes risky service to the nation you will not be victimised.”

Kindiki adds that any cases of officers unlawfully using their weapons will be handled “the normal way”. He says there are enough Kenyan and international laws that support the use of lawful violence to protect the population.

He makes no mention of the alleged Kinoti victimisation, as the website, known for political gossip, claims.

No, Kenyan senator Karen Nyamu not expelled from governing party