According to a notice posted on Facebook, Kenya’s ruling Jubilee Party has summoned one of its senators to a disciplinary hearing for violating the party’s constitution.

The notice and the accompanying “charge sheet” claim senator Isaac Mwaura was “disloyal” and had “advanced positions that are contrary to the position of the Jubilee Party”.

It lists four other charges, including “lack of respect” to the organs and decisions of the party, and “failure to comply with the party’s code of conduct”.

It claims the senator “undermined the leadership” of the party through attacks on president Uhuru Kenyatta, the party leader, and “members of his family”.

The notice and charge sheet began to circulate on 5 January 2021, just days after Mwaura expressed support for deputy president William Ruto and his bid for the presidency in 2022 – an issue that has divided the party.

In a similar letter, also shared on Facebook, Mwaura is asked to appear at the Jubilee headquarters on 18 January, when the complaint against him will be heard by the party’s national disciplinary committee.

But has the senator been summoned? We checked. 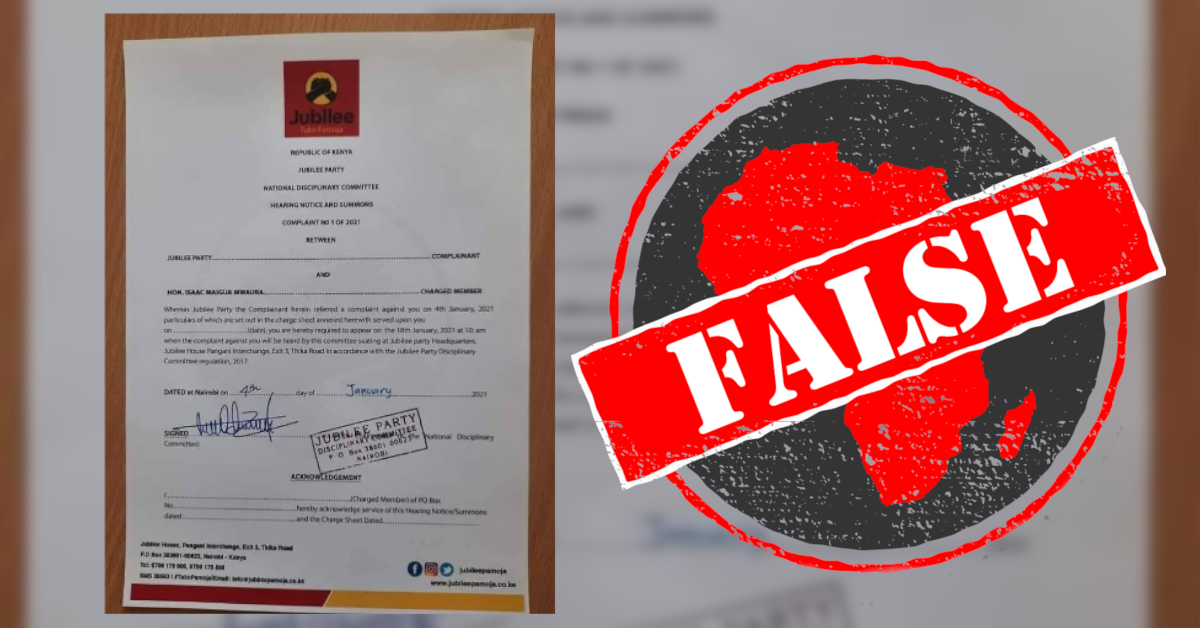 On 5 January the Jubilee Party posted the two documents on its verified Twitter account, each stamped “FAKE”.

“Note to the public: The two documents purporting to convey communication from Jubilee Party National Disciplinary Committee are fake,” the party tweeted.

NOTE TO THE PUBLIC: The two documents purporting to convey communication from the Jubilee Party National Disciplinary Committee are fake. @AlbertMem pic.twitter.com/w44MVdeBYF


And Mwaura hasn’t received such a charge sheet. On the same day, he tweeted: “Kenyans are asking me about this letter from the Jubilee party. I haven’t received it in person.”