No, king of Buganda isn’t dead and Ugandan media exec didn’t say so

Is the king of Buganda dead, as a tweet shared widely on social media suggests?

In April 2021 it dispelled rumours that the king, or kabaka, Ronald Muwenda Mutebi II, had been poisoned.

Now rumours about the king are circulating again, in screenshots of what appears to be a tweet from Ugandan media executive Don Wanyama.

The tweet reads: “Kabaka’s whereabouts remain unknown as the Kingdom summons all chiefs and royals living abroad for a private vigil by the royal family over the King’s death. The Mengo Establishment wanted a private vigil before they could pronounce his death in a few days to come. #CovidIsReal.”

The screenshot, posted on 2 July 2021, has been shared widely on several public Facebook groups. The groups have a combined membership of over 500,000 users.

Data from CrowdTangle, Facebook’s public insights tool, shows that it has had hundreds of interactions. But did Wanyama really send this tweet? 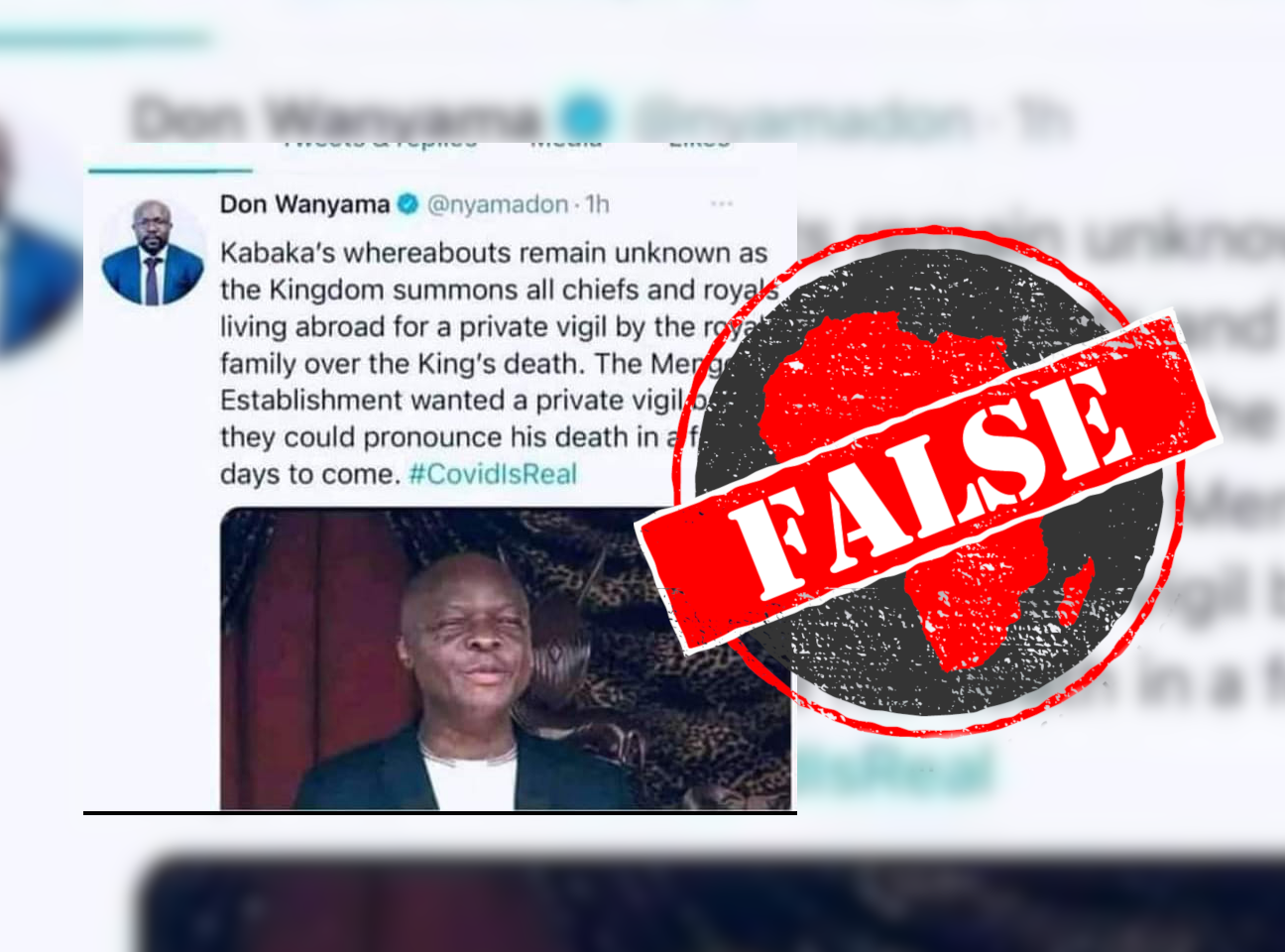 He wrote: “This supposed tweet assigned to me is fake. I haven’t tweeted this. I hope whoever originated this can be apprehended.”

He also asked people to “make an effort to check the author’s handle to authenticate before you share”.

But the handle and the profile photo in the digitally manipulated screenshot do match Wanyama’s Twitter account. The wording was likely added to a screenshot from his actual account.

Away from limelight, not dead

On 13 April, the kabaka celebrated his 66th birthday. Some Twitter users shared a video claiming he appeared frail and was sick.

The kingdom’s prime minister, or katikkiro, Charles Peter Mayiga, said shortly afterwards that the king was suffering from an allergic reaction “that causes him breathing difficulties, especially when he wears a mask or face shield”.

Since then, there has been widespread speculation about Mutebi II’s health and he has stayed out of the limelight.

But the kabaka was photographed on 3 August 2021 with Museveni at the presidential residence at Nakasero in Kampala.

Museveni tweeted about the meeting: “Held a meeting with His Majesty the Kabaka of Buganda Ronald Muwenda Mutebi II at Nakasero State Lodge.  His Majesty was in the company of Owek. Charles Peter Mayiga and Prince David Wasajja. We discussed matters of mutual interest.”

Ugandan media executive Don Wanyama did not tweet about Mutebi II’s death, and the Bugandan king is alive.