“Aaron Hank baseball legend got the Covid vaccine shot a week ago to send black people a message and died a week later,” reads text on a graphic posted on Facebook in South Africa on 23 January 2021. It shows a photo of an elderly man getting an injection.

It was posted with the comment: “No one knows what the cause of death will be yet... but as of now THE FACTS ARE!!!...he had no previous health issues & a week later died after taking this vaccine 💉”

Henry Louis “Hank” Aaron was a revered US professional baseball player. A right fielder, he played for 23 Major League Baseball seasons, from 1954 to 1976. He was elected to the Baseball Hall of Fame in 1982, with 755 career home runs.

On 6 January, in what was to be his final tweet, Aaron posted an article about his Covid-19 vaccination the day before. “I was proud to get the COVID-19 vaccine earlier today at Morehouse School of Medicine,” he wrote. “I hope you do the same!”

I was proud to get the COVID-19 vaccine earlier today at Morehouse School of Medicine. I hope you do the same! https://t.co/RAlkmkCRra

He died more than two weeks later in Atlanta, a city in Fulton county in the US state of Georgia, on 22 January. He was 86. The Atlanta Braves, Aaron’s team, posted a statement about his death.

“We are absolutely devastated by the passing of our beloved Hank. He was a beacon for our organisation first as a player, then with player development, and always with our community efforts.”

But was Aaron’s death linked to the vaccine, as the graphic implies? We investigated. 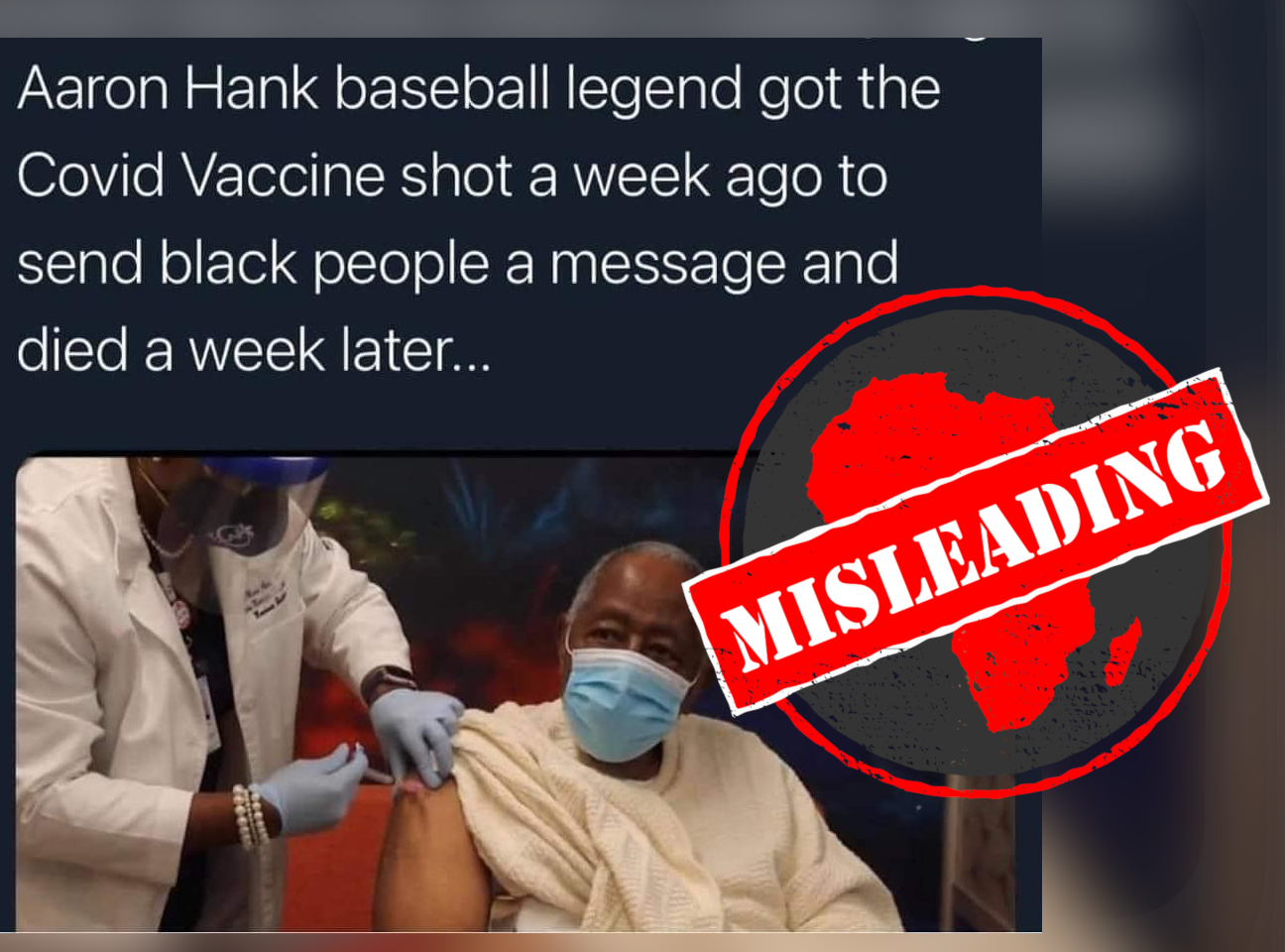 ‘Not related’ to Covid-19 vaccine

US TV network NBC News reports that vaccine sceptics have jumped on the news of Aaron’s death. Anti-vaccination activist Robert F Kennedy Jr tweeted that it was “part of a wave of suspicious deaths” related to the vaccine.

And Dr Carlos del Rio, an executive associate dean at the Emory University School of Medicine, told NBC that coronavirus vaccines are safe and effective.

The suggestion that Aaron died as a result of the Covid-19 vaccine has been investigated by our colleagues at AFP Fact Check.

“There was no information suggestive of an allergic or anaphylactic reaction to any substance which might be attributable to recent vaccine distribution,” she told AFP.

“Based on the information provided by Mr Aaron’s family and physical examination of his body, it is my medical opinion that Mr Aaron’s death was not related to his recent vaccination for Covid-19.”

Why did Aaron’s death spark such a reaction?

Aaron’s very public vaccination on 5 January was in part “to send a message to Black Americans that the shots are safe”, the Associated Press reports.

Aaron told AP that he didn’t “have any qualms about it at all” and felt “quite proud” of himself for taking the vaccine.

“It’s just a small thing that can help zillions of people in this country.”

Experts have warned that trust in Covid-19 vaccines is low among black people in the US. This makes them more reluctant to be vaccinated, even though the disease has hit the black community particularly hard.

Sandra Lindsay, a Jamaican-born critical care nurse who was the first person in New York to get the vaccine, told NBC that this distrust “stems from past harmful practices, such as the Tuskegee study”.

From 1932 1972, black men in Tuskegee, Alabama, were purposefully denied syphilis treatment so researchers could study the effects of the disease.

Lindsay said the study is often referred to by her patients, including children.

“People keep going back to that,” she told NBC. “We know that it was harmful and inhumane and painful and hurtful.”

Hank Aaron did die aged 86, more than two (not one) weeks after being inoculated against Covid-19, but his death was from natural causes and unrelated to the vaccine.