“Every single country where monkeypox is allegedly showing up is also a country that has aggressively pushed the Pfizer Covid-19 injection to its population,” reads a screenshot circulating on Facebook.

It includes a link to an article on the Exposé, a known conspiracy theory disinformation site. The headline reads: “‘Monkeypox’ is only circulating in countries where the Pfizer Vaccine has been distributed & is being used to advance a Technocratic Great Reset.”

Other screenshots doing the rounds on Facebook, stamped with the Exposé’s URL, compare two maps of the world, one apparently showing cases of monkeypox by country, the other countries where the Pfizer vaccine has been rolled out.

Monkeypox is a rare viral disease related to smallpox, but not as deadly. Its symptoms include a rash, fever, headache and muscle aches. It is spread by close contact with an infected person. Previously, about 1% to 10% of people with monkeypox have died. But the death rate is thought to be lower in countries with better healthcare.

The disease was previously endemic to – only found in – countries in central and west Africa. But from May 2022 it began spreading to other countries of the world. On 23 July the World Health Organization declared monkeypox a public health emergency of international concern.

But have cases of monkeypox only appeared in countries where the Pfizer-BioNTech Covid vaccine has been used? 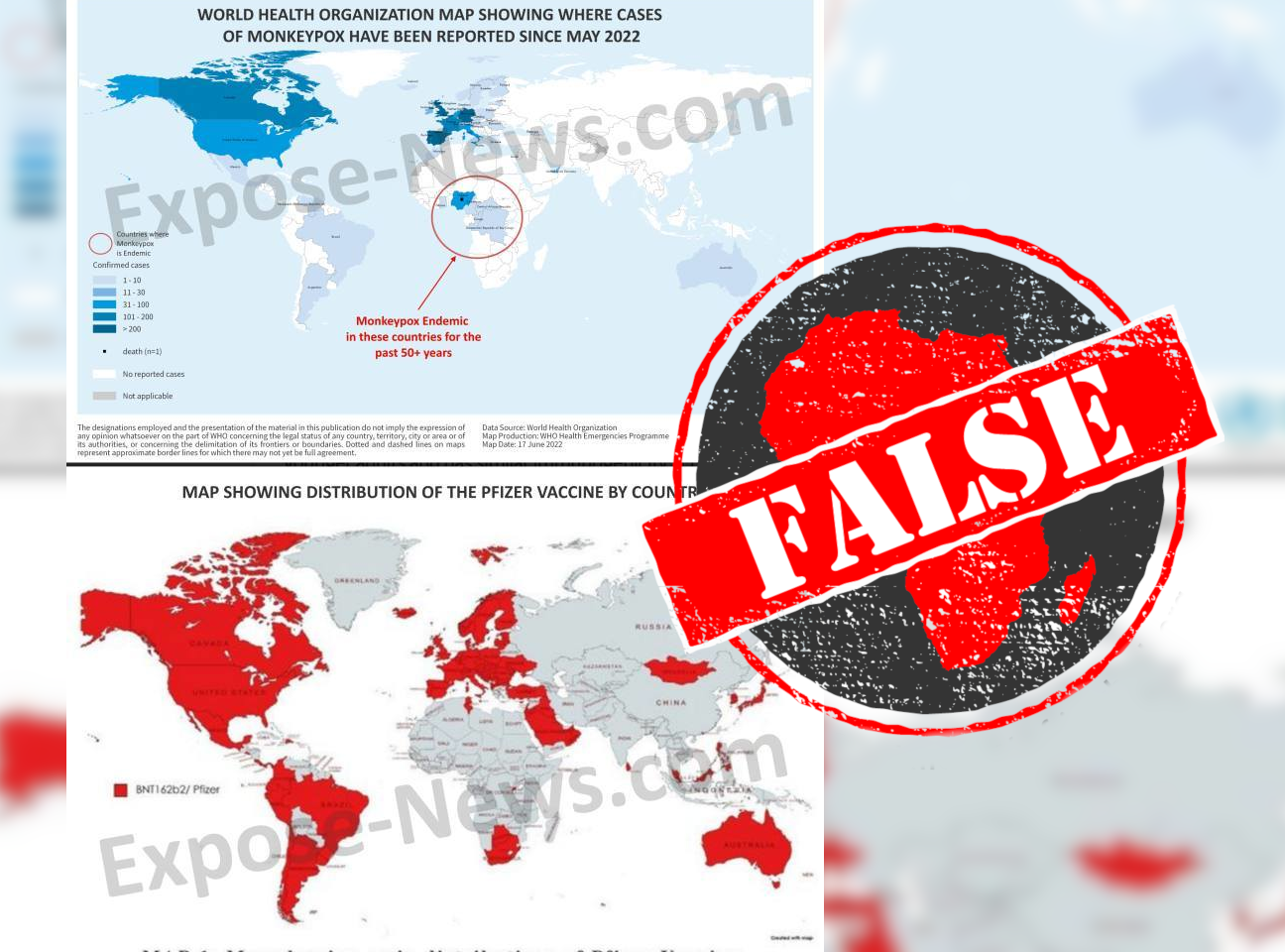 Monkeypox outbreaks date back half a century

According to the New York Times Covid vaccine tracker, the Pfizer jab has been rolled out in 164 countries by 15 August.

And according to the US Centers for Disease Control, cases of monkeypox had been reported in 95 countries by 22 August. Out of those countries, 88 had not reported monkeypox before the May 2022 spread, while it was endemic to the remaining eight.

There are two main problems with the Exposé’s claim.

First, monkeypox outbreaks have occurred in several African countries since at least 1970 – a full 50 years before the Pfizer vaccine was first approved for use, by the UK in December 2020. It is impossible for the vaccine to somehow cause the disease if the disease was around for half a century, when there was no vaccine.

Second, the Pfizer vaccine has been used in 164 countries, while monkeypox has occurred in 88. That’s a difference of 76 countries.

A quick comparison of the more credible maps on the vaccine tracker and CDC website shows that some cases of monkeypox have been reported in countries where the Pfizer vaccine wasn’t rolled out. And some places that have used the vaccine haven’t had any cases of the disease.

Places where the Pfizer vaccine has been used, but no monkeypox reported, include Afghanistan, French Guiana, Guyana, Mongolia, Pakistan, Paraguay, Turkmenistan, Ukraine and Western New Guinea.

And countries that haven’t used the vaccine but have reported monkeypox include the Congo, the Democratic Republic of the Congo, Greenland, India, Iran, Russia and Venezuela.

The only connection between the Pfizer Covid vaccine and monkeypox is a global disease outbreak. The Exposé is, again, wrong.

Africa Check has previously debunked claims about monkeypox and Covid vaccines and found that there is no evidence that the two are linked.