“Got pregnant from raping a Dead man on the Autopsy table!!” begins a viral screenshot circulating on Facebook in August 2022.

The screenshot includes what appear to be two mugshots of a woman. A mugshot is a police photo of a suspect’s head and profile used to identify them.

“A 26-year-old morgue worker was arrested after a DNA test revealed that her newborn child was the result of a necrophiliac intercourse with a man she was supposed to autopsy,” the post claims.

The screenshot is of a tweet originally posted on 25 August. On Facebook, one version has been viewed more than 332,300 times so far. The tweet has been retweeted more than 2,250 times.

Was a morgue worker arrested after she raped a male corpse, fell pregnant and had the dead man’s child? We checked. 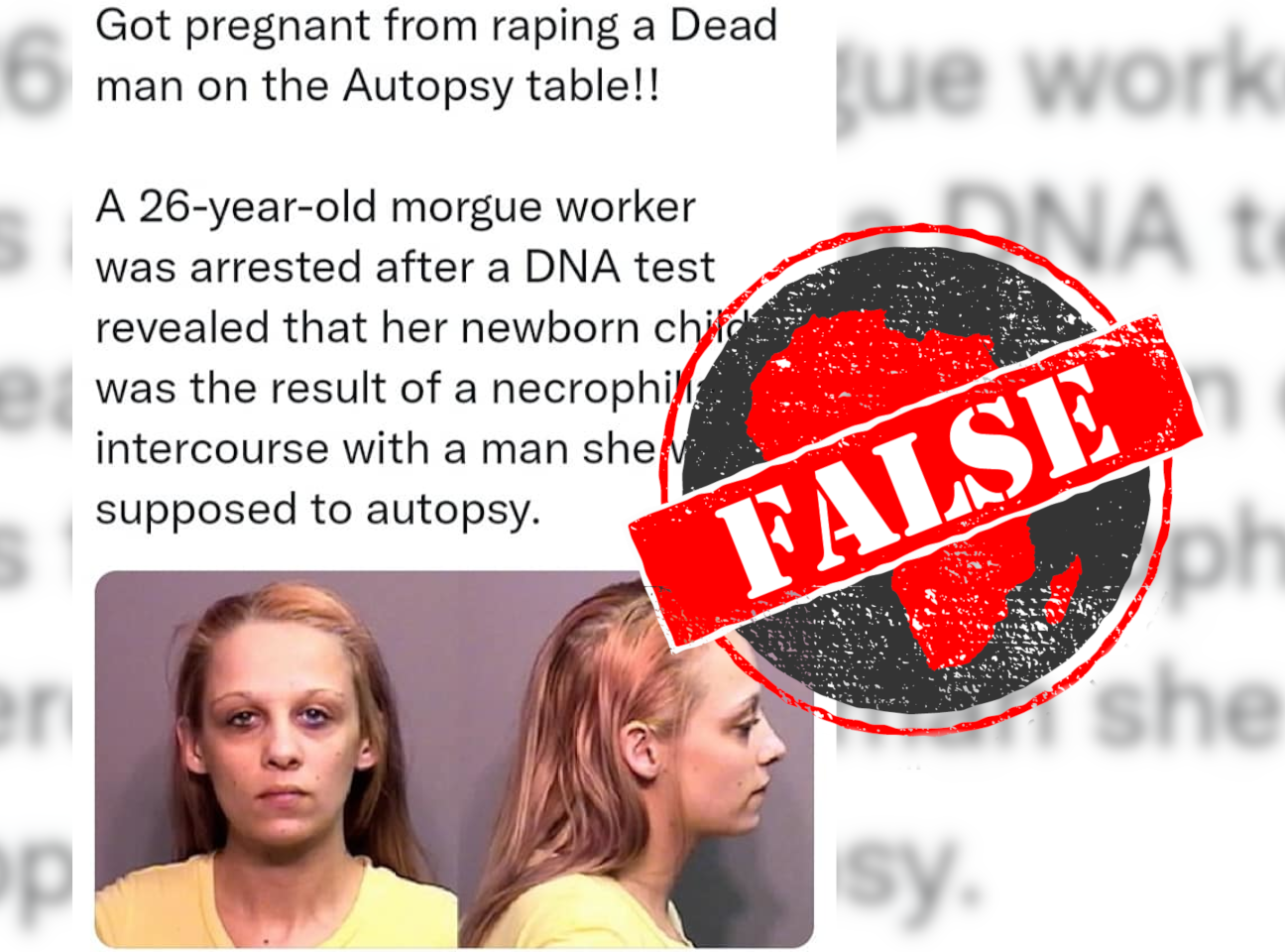 The Facebook post adds more details to the story. It claims that the morgue worker was a woman named Jennifer Burrows who worked as an assistant pathologist in the US state of Kansas.

She was discovered to have raped a dead 57-year-old male veterinarian in the morgue she worked in. She then fell pregnant and gave birth to a baby boy. A DNA test proved that the dead man was the father.

The man died in a car accident in March 2015 and she gave birth on January 7. It also claims that she was accused of raping 60 male bodies aged from 17 to 71.

The original tweet is part of a longer thread that tells the same story but changes the date the man died to March 2017. The thread links the story to an article on a website called World News Daily Report.

But the World News Daily Report is a satirical website. Its “about” section includes a disclaimer: “WNDR assumes however all responsibility for the satirical nature of its articles and for the fictional nature of their content. All characters appearing in the articles in this website – even those based on real people –  are entirely fictional and any resemblance between them and any persons, living, dead, or undead is purely a miracle.”

The Collins dictionary defines satire as “the use of humour or exaggeration in order to show how foolish or wicked some people's behaviour or ideas are”.

Clearly labelled satire is not misinformation as it is not presenting itself as truthful. But when satire is spread out of context, as if it were fact, it becomes misinformation.

“After verification it was declared false since it was one story repeated 4 times with different character's name on every new story and extremely rare for pregnancy to occur under the described circumstances declared on the story,” the user said.

A reverse image search shows that an earlier version of the satirical story has been spreading online since at least 2010.

In the earlier version, the morgue worker’s name is Felicity Marmaduke and she was from Missouri, a different state in the USA.

The story was first published on Dead Serious News, which is also a satirical news site, although the original story does not appear to be online anymore.

We have not been able to find the real identity of the woman in the photos.

No, a mortuary worker has not been arrested after she became pregnant from raping a dead man. The claim is an 11-year-old satirical story that has been republished with different details over the years.