A Covid-19 vaccine will cause “irreversible genetic damage” to the human body, according to a message quoting “German naturopath Anette Lillinger” that’s been widely shared on Facebook. One version claims it would be a “crime against humanity”.

So the vaccine it refers to is presumably the mRNA-1273 candidate vaccine being developed by Moderna.

Africa Check could not find a public statement by “German naturopath Anette Lillinger” other than the message shared on social media. We could also find no other mention of a naturopath with this name. It is worth noting that a naturopath would not necessarily have any medical training or expertise.

But what is this mRNA candidate vaccine? How does it work, and does it cause irreversible genetic damage? 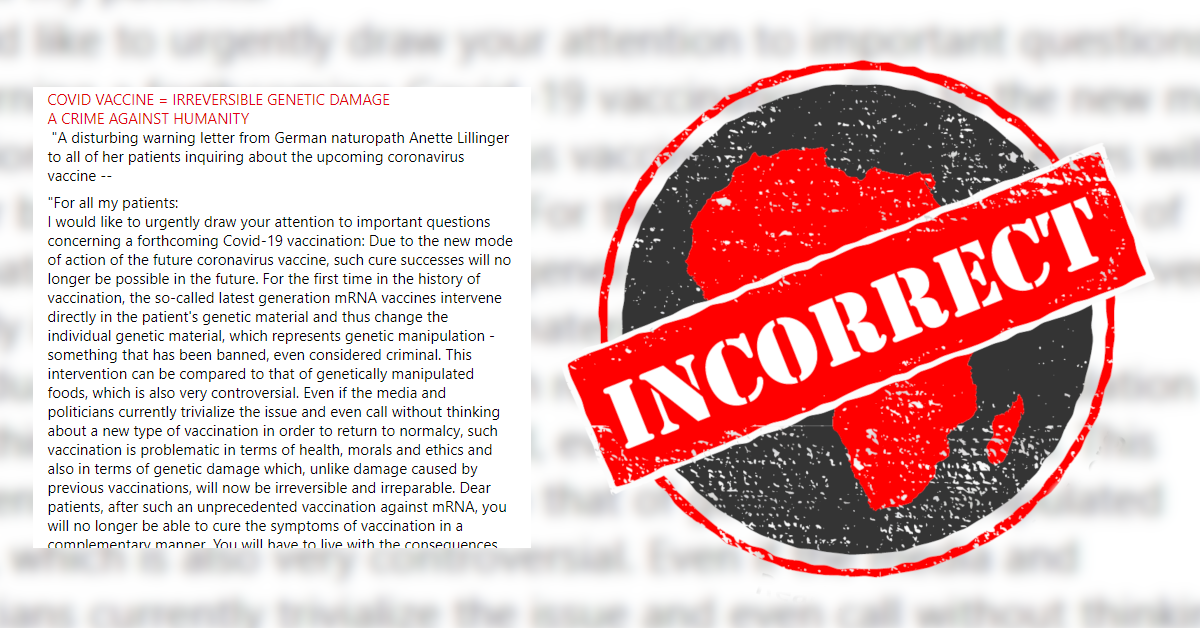 Moderna designs mRNA – messenger ribonucleic acid – vaccines, a relatively new form of vaccine. They may have the potential to fight not just viral diseases such as Covid-19 and Zika, but even cancers, which are not caused by viruses.

Two phases of clinical trials of the mRNA-1273 vaccine have already been conducted, with a third one planned. It has not yet been proven to effectively vaccinate people against Covid-19.

But what is mRNA? To understand it, we must first look at DNA, deoxyribonucleic acid. DNA is the chemical compound that stores an organism’s genetic information.

DNA is like a blueprint for an organism. In humans, DNA determines factors like eye colour. Certain genes can also cause genetic disorders, which often cannot be cured. These are permanent conditions that may be passed on from parent to child.

DNA cannot be converted directly into the feature it codes for. If a cell needs to make a protein, the instructions for making that protein first need to be “transcribed” or copied into mRNA. Then, other cellular components “translate” the mRNA into a protein.

Moderna uses this mechanism to create mRNA vaccines. As the company explains on its website, Moderna designs strings of mRNA that code for proteins to help fight a particular disease. This mRNA is not transcribed from DNA in the body, but directly produced in a lab.

The mRNA is then injected into the body, and the body translates it into the required proteins in the same way that it builds other proteins from mRNA produced in its cells.

In other words, mRNA vaccines are like instruction kits that allow the body to build its own defences against a disease. They do not “intervene directly in the patient's genetic material and thus change the individual genetic material”, as the Facebook message claims.

Instead, they mimic mRNA, the cellular “instructions” that are usually copied from your DNA. But your actual DNA or genetic material is not changed.

The message does not explain how an mRNA vaccine is supposed to cause “genetic damage”.

It suggests that the genetic manipulation it attributes to mRNA vaccines “can be compared to that of genetically manipulated foods”.

Genetically modified organisms or GMOs are living things – animals, plants or single-celled life forms – that have been deliberately altered to have a desired characteristic. They include crops designed to produce a greater yield or require less water.

GMOs are fundamentally different to mRNA-based technologies. A GMO is created by editing the actual DNA of an organism, while an mRNA vaccine only contains the mRNA needed to build a particular protein or series of proteins.

No evidence of ‘genetic damage’

National Geographic explains that Moderna’s mRNA-1273 codes for the spike protein the new coronavirus uses to invade human cells. The spike is only one part of the virus. But human bodies are able to identify the spike, and create antibodies to defend against it.

The potential vaccine mRNA-1273 would allow human bodies to build a small part of the virus, so that they can recognise it and destroy it if the body encounters that structure again.

After two rounds of human trials, no “genetic damage” has been detected. A third phase of trials with 30,000 participants will begin in July 2020.