This loosely translates as: “Naturally, it has been scientifically proven, over and over, that your DNA can change. The Pfizer mRNA vaccine's process by which it works is EXACTLY its method of changing DNA.”

It includes a graphic titled “Gene editing”, in English. Text below the title reads: “A DNA editing technique, called CRISPR/Cas9, works like a biological version of a word-processing programme’s ‘find and replace’ function.”

Below that is an illustration of how the technique involves infecting cells with a DNA-cutting enzyme and a guide molecule, targeting DNA strands, cutting the targeted strand, and amending the DNA with a changed DNA strand.

But does the graphic show the gene-editing technology mRNA vaccines use to change a person’s DNA? We checked. 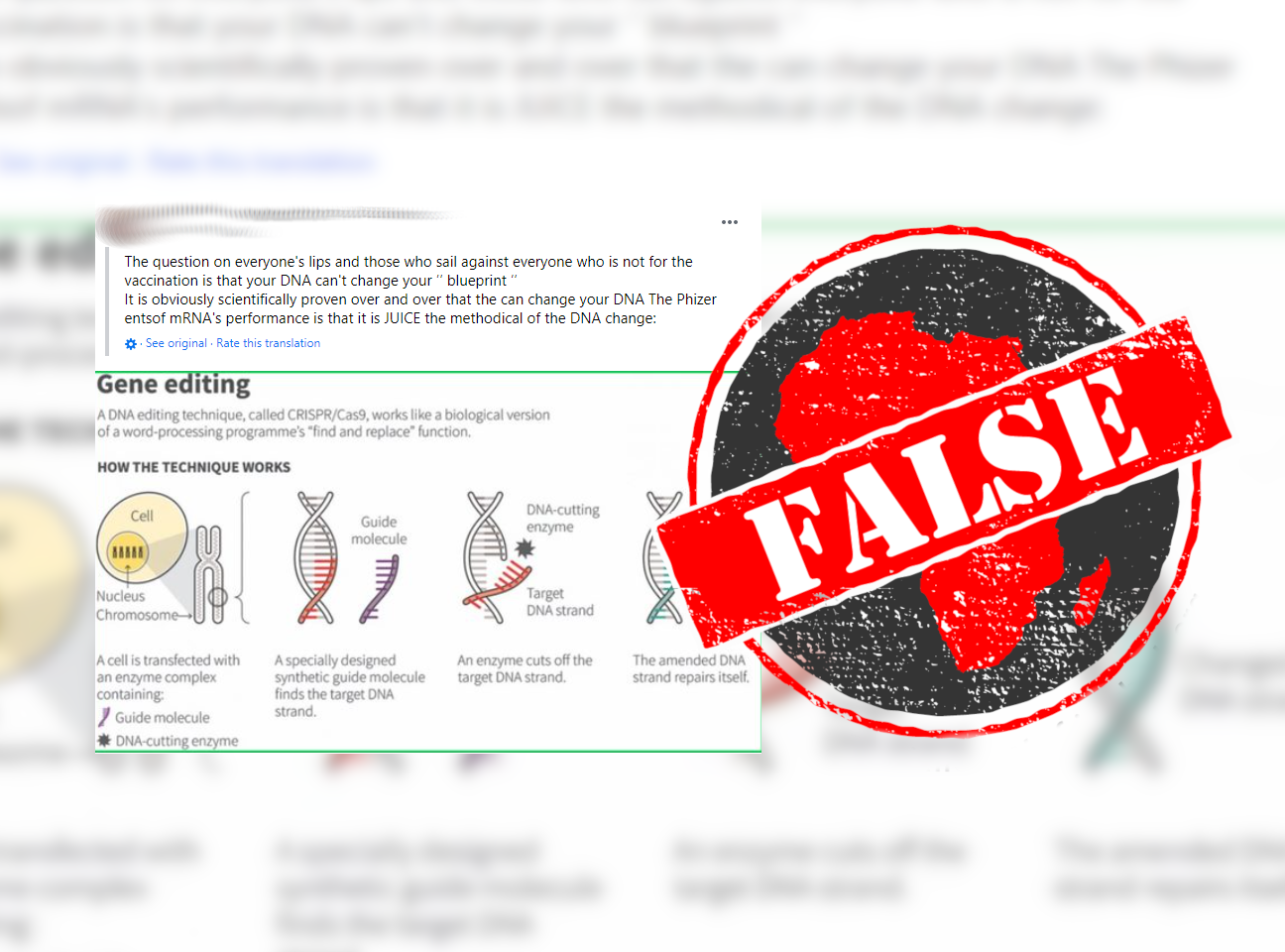 The graphic was originally published on the World Economic Forum’s website almost six years ago, in 2015.

It appears in an article on the CRISPR-Cas9 gene editing tool, which allows scientists to easily edit DNA and could potentially be used to “treat genetic defects, eradicate diseases, and even end the organ transplant shortage”.

At the time, the technology was still being tested to determine if it was safe to use in humans.

CRISPR technology has been explored in relation to Covid-19. So far it has been tested as a tool to diagnose Covid-19. More recently, it has been tested in animal studies to see if a CRISPR system could be used as an inhaled antiviral therapeutic against any viral flu strain, including Covid-19.

We could find no evidence that the Pfizer vaccine injects CRISPR technology into the body.

Messenger RNA (mRNA) vaccines are a new type of vaccine technology. To understand how they work, we need to understand DNA and RNA.

Deoxyribonucleic Acid or DNA is the molecule that carries the genetic information for all living things. Most DNA is contained in the nucleus of a cell.

Ribonucleic acid or RNA is similar to DNA. One of the tasks cells use RNA for is messenger RNA or mRNA. These carry sets of instructions for making proteins in cells.

An mRNA vaccine works by sending messages that instruct the body to make a specific protein found in the coronavirus that causes Covid-19. The protein then triggers an immune response, which produces antibodies to the virus.

Shortly after the instructions are read by the cells, the body naturally breaks down the mRNA.

There are currently two mRNA vaccines, the Pfizer-BioNTech vaccine and the Moderna vaccine, approved for use in several countries. The New York Times coronavirus vaccine tracker explains in more detail how they work.

“To alter the human DNA, one would need to introduce genetic material from another organism into the nucleus of the cells of the human body which contains their natural DNA,” they explain.

“The mRNA does not enter the nucleus: it remains in the cytoplasm of the cell where the spike protein is made. It is also relatively fragile, weakens, and breaks down in the cell within about 72 hours, which is why it is kept at such low temperatures.”

MRNA vaccines do not use a gene-editing technology named CRISPR in order to change human DNA. The mRNA vaccines are incapable of changing human DNA as they do not enter the nucleus of the cell.