IN SHORT: A false rumour about George Floyd, a black man murdered by a white police officer in the USA, has reached South Africa. As other fact-checkers have found, a man with the same surname arrested for a random road-rage killing is not Floyd’s younger brother.

“George Floyd’s younger brother, Dejywan Floyd, has been arrested in North Carolina for a ‘road rage’ shooting of a white couple, killing the mother of six sitting in the passenger seat.”

That’s the text on a screenshot of a WhatsApp message posted on Facebook in South Africa.

It includes what seems to be a mugshot – a photo taken when a person is arrested – of a black man, next to a photo of a smiling white woman.

George Floyd, 45, was killed by police in Minneapolis, a city in the US state of Minnesota, on 25 May 2020. The white police officer Derek Chauvin kneeled on a handcuffed Floyd’s neck for nine minutes, during which Floyd said he couldn’t breathe about 20 times.

Chauvin was found guilty of manslaughter and murder and sentenced to 22 and a half years in prison. He was later sentenced to 21 years, to be served at the same time as his murder sentence, for violating Floyd’s civil rights. Other police officers involved in Floyd’s arrest were given shorter sentences for the killing.

Floyd’s death sparked widespread protests across the US and elsewhere in the world. It also gave new impetus to the Black Lives Matter movement, which demands that authorities respect the lives of black people as of equal worth to the lives of others.

The WhatsApp message claiming that Floyd’s younger brother has been arrested for the road rage murder of a mother of six begins with: “Why isn’t this on the NEWS channels?”

The answer is simple. Dejywan Floyd is not George Floyd’s brother. 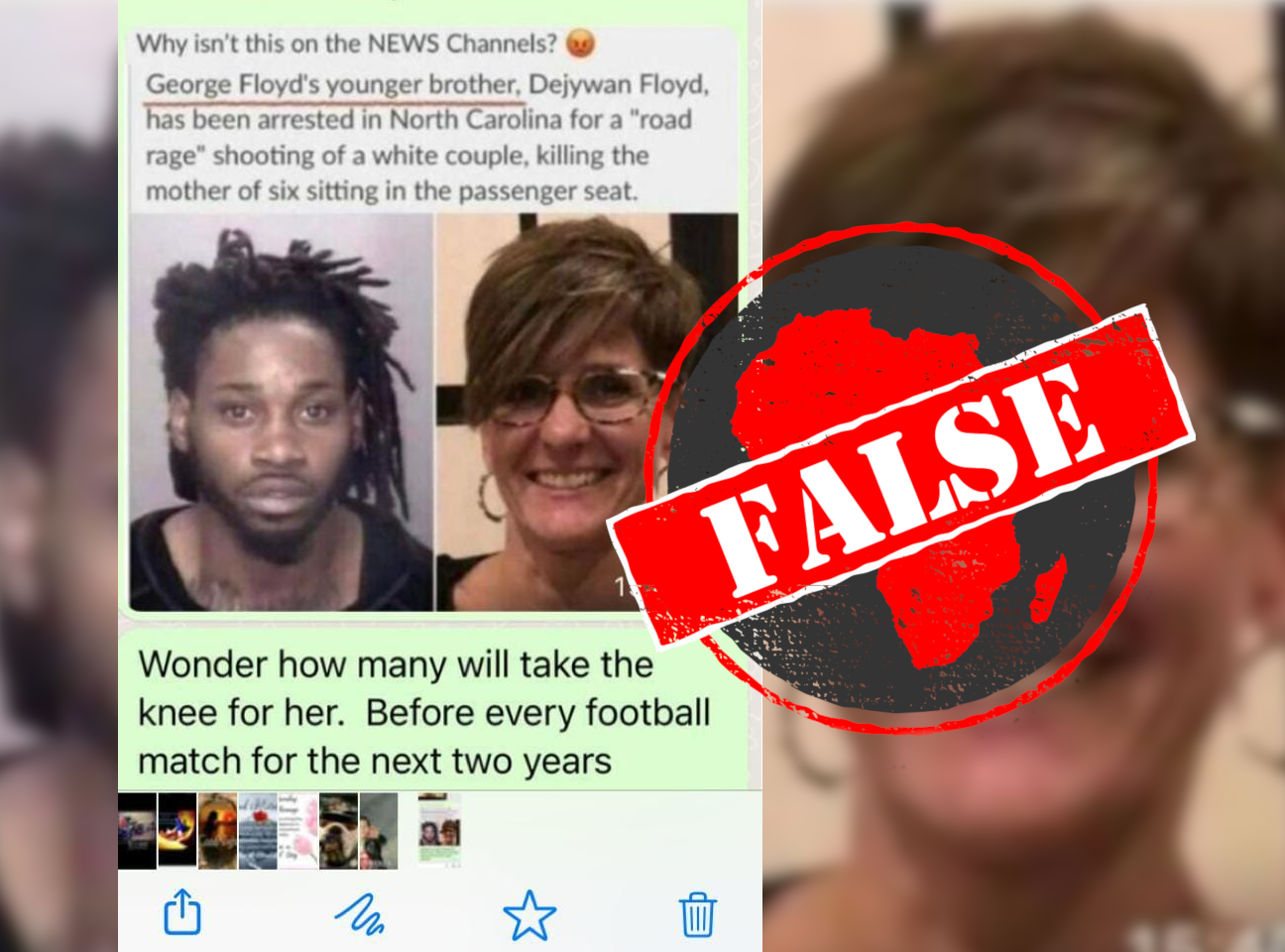 ‘Floyd is a very common name in this county’

A 26-year-old man named Dejywan Floyd was arrested for the murder of a 47-year-old woman named Julie Eberly on 1 April 2021. The arrest was in Lumberton, a city in Robeson county in the US state of North Carolina.

It’s alleged that while driving on a highway near the city, Dejywan Floyd fired a gun into the passenger side of another car, killing Eberly. According to recent reports, he faces the death penalty for the crime.

But there is no evidence that Dejywan Floyd is George Floyd’s brother.

George Floyd’s obituary, posted on the website of Buie’s Funeral Home, lists his friends and relatives. They include his three children, his parents, his sisters and step-sisters – and his four brothers and step-brothers. None of the brothers is named Dejywan.

George Floyd was born, and buried, in North Carolina, the state in which Dejywan Floyd was arrested.

But that’s where the connection ends. “Floyd is a very common name in this county and surrounding area,” Robeson county sheriff Burnis Wilkins told our fact-checking colleagues at FactCheck.org.

He added that his office had “received no indication of that being true at all regarding this rumour”.

The claim that Dejywan Floyd is George Floyd’s brother has also been debunked by WCNC Charlotte, Verify, USA Today, the Associated Press and PolitiFact.