Several Facebook posts have shared a graphic in which it is claimed that the daughter of former president of the United States, George W. Bush, has converted to Islam. The image includes a picture of Bush and a closeup of a woman wearing a hijab.

The graphic also bears the words “President George W. Bush daughter accepted Islam”. But who is the woman in the picture? And have either of Bush’s two daughters converted to Islam? 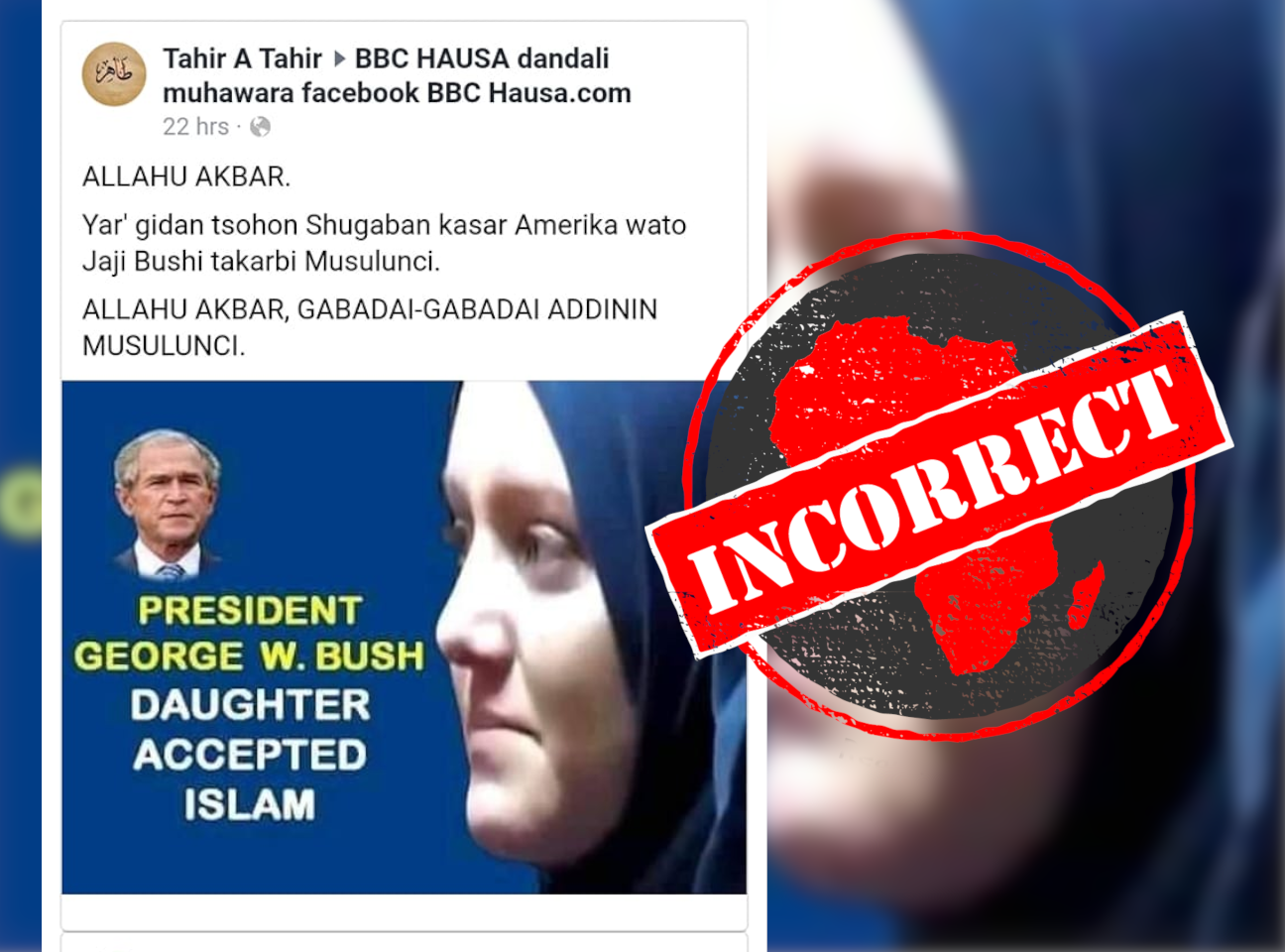 On 11 September 2001, less than nine months after Bush was sworn in as the 43rd president of the United States, members of an Islamic extremist group al-Qaeda carried out the deadliest terror attack on US soil ever. This attack and the invasions of Afghanistan and Iraq by the US would become defining moments in Bush’s presidency.

The SLPC also says that such crimes declined “almost certainly thanks to” statements by Bush condemning anti-Muslim sentiment.

It might be surprising, given the hostile US attitudes towards Islam which defined his presidency, if one of Bush’s daughters had converted to the religion. But neither has.

Bush has twin daughters born in 1981. Jenna Bush Hager is an author and co-host of US TV show Today, and her sister, Barbara Pierce Bush, is the founder of health equity non-profit organisation Global Health Corps. The two have also written a book together.

The woman in the photograph is neither Jenna nor Barbara. Although a reverse image search reveals that the woman has been misidentified as a Bush in the past, she does not look like either twin.

The closeup shared in the Facebook post is a still from a longer video, which it seems was first shared to YouTube in 2014. It is captioned: “Romanian Woman Converting to Islam Emotional – January 2014”.

AFP Fact Check has confirmed that the woman in the video is speaking in Romanian to a man in a striped shirt. AFP says that the two discuss Islam for some time before the woman recites the prayer of conversion.

Bushes have not announced conversion to Islam

Neither Bush daughter has announced that they have converted, or intend to convert, to Islam.

An April 2020 article by Yahoo! News claimed that Hager regularly attended church with one of her Today show co-hosts, and she delivered a reading from the book of Revelations at the funeral of her grandfather, former US president George H.W. Bush.

Barbara Paige Bush has not been outspoken about her religion. She was married in a private ceremony in 2018, and while details about the ceremony were scant, it was officiated by her aunt and there were no indications it was a Muslim ceremony.

A photo shared by Hager’s publisher, Harper Collins, in 2020 also shows the Bush family posing in front of a large stone cross, the universal symbol of the Christian church.

No, Kobe Bryant’s daughter Natalia has not died by suicide

Japan ‘keeps Islam at bay’? The evidence is incorrect

No, Angola has not banned Islam

No, terrible damage to foot not caused by ‘abusing and marching’ on Qur’an