The Georgia Guidestones, an intriguing set of megaliths in the US state of Georgia known as “America’s Stonehenge”, have been the subject of conservative conspiracy theories since they were erected in 1980.

The stones were three upright slabs of granite set around a central pillar and topped by a fourth slab. They were inscribed with cryptic messages for the future in several ancient and modern languages. Some Christians believed they were “satanic”.

A fringe politician called Kandiss Taylor even led her nomination campaign for Georgia’s governorship with the promise that she would “stand up to the Luciferian Cabal” and demolish the stones to rid the state of “this satanic evil”.

Taylor didn’t win, but someone fulfilled her promise anyway. In the early morning of 6 July 2022, one of the stones was blown up. Georgia authorities then demolished the rest of the monument “over safety concerns”.

Soon after, yet another fake conspiracy theory started circulating online – including on Facebook in South Africa.

It’s in what seems to be a screenshot of an article by the New York Times, a US newspaper. The headline reads: “Pfizer CEO Vows To Re-Build The ‘Iconic’ Georgia Guidestones.”

A summary below adds: “For more than four decades, the Georgia Guidestones have been an enigma. On Wednesday, Pfizer’s CEO Albert Bourla agreed to finance its reconstruction, provided it could be completed by February 23rd, 2023. A mere six months, six weeks, and six days after the mysterious explosion in Georgia.”

The final sentence is clearly an allusion to 666, the “number of the beast” associated with notions of satanism.

Some Facebook users have suggested that Pfizer plans to rebuild the guidestones because it wants to “depopulate” the world, a frequently debunked claim. One of the stones’ inscriptions read: “Maintain humanity under 500,000,000 in perpetual balance with nature.”

But is the screenshot really of a New York Times article? 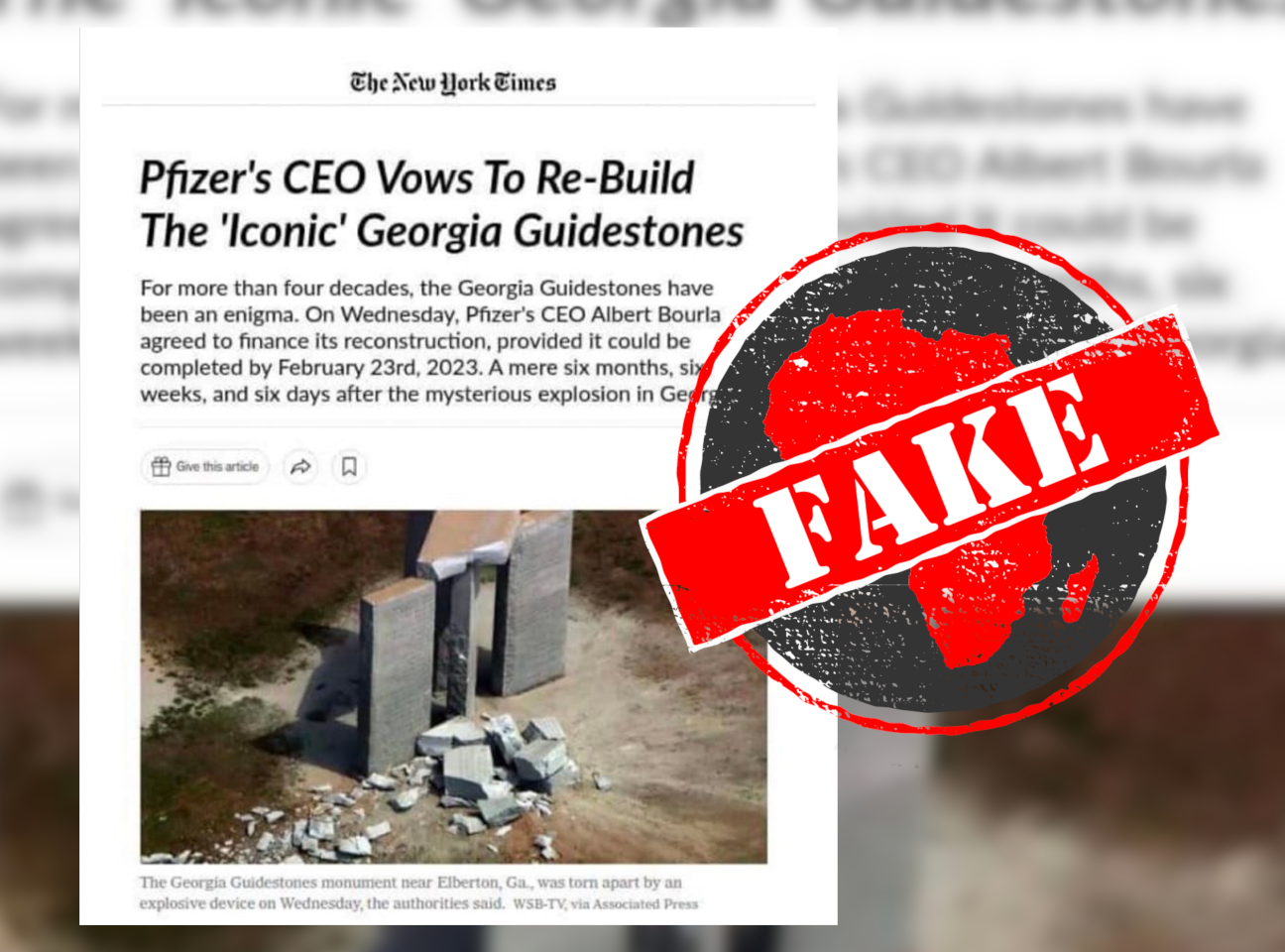 No news of rebuilding plan

A Google reverse image search of the screenshot brought up no New York Times article. A quick Google search for the headline also came up empty.

We searched for it on the New York Times website and again found nothing.

And a spokesperson for the newspaper told Reuters that the screenshot was fake. It shows “a fabricated headline and subhead, which was not published by The New York Times”. And a Pfizer spokesperson said Bourla had “not made any statements about re-building the Georgia Guidestones”.

We could find no credible report, either by a reputable news organisation or Pfizer, that Bourla had “vowed” to rebuild the stones. It would have made headlines, but it hasn’t.