IN SHORT: An online rumour is that Tokunbo Awolowo-Dosumu, daughter of Nigerian independence statesman Obafemi Awolowo, said there was a plot to oust Bola Tinubu and make Hashim Shettima president if the All Progressives Congress won the presidency. But she has dismissed the rumour as “false, mischievous and wicked”.

Nigeria is set to choose a new president in months, with elections slated for early 2023.

One of the leading candidates is Bola Tinubu of the governing All Progressives Congress. In July 2022, Tinubu announced that Kashim Shettima, the former governor of Borno state, would be his running mate – and therefore the APC’s vice-presidential candidate.

But in September, a rumour started circulating online that there was a plot to oust Tinubu if he won the presidency, and make Shettima president instead.

It claims the plot was revealed by Tokunbo Awolowo-Dosumu, Nigeria’s former ambassador to the Netherlands, executive director of the Obafemi Awolowo Foundation and chair of African Newspapers of Nigeria Plc.

Awolowo-Dosumu is the daughter of the late statesman Obafemi Awolowo, who played a key role in the country’s independence movement.

“Tokunbo Awolowo-Dosunmu, the daughter of Nigerian nationalist and statesman, Obafemi Awolowo has alleged of plot to get rid of Bola Tinubu, the All Progressives Congress (APC) presidential candidate if he wins the 2023 election,” a typical version of the rumour reads, on Facebook.

“She alleged that there was a plot to get rid of Tinubu and install his running mate, Kashim Shettima as President,” it adds.

“She said those behind the plot would take advantage of Tinubu’s medical condition.”

But did Awolowo-Dosunmu really make this claim? We checked. 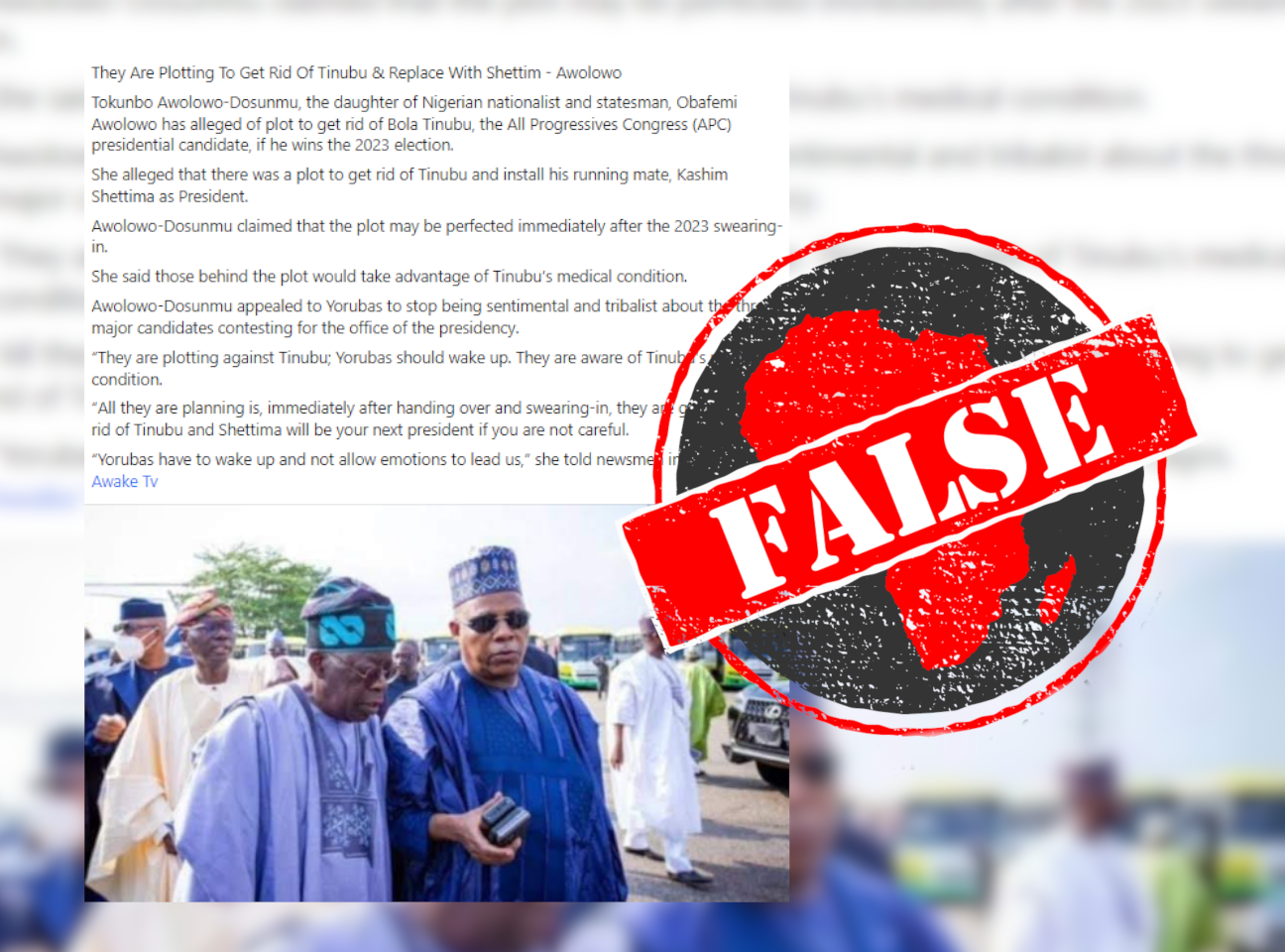 ‘A matter I know nothing about’

The rumour isn’t backed by any details, such as when and where Awolowo-Dosumu was supposed to have revealed the plot. This kind of vagueness is common with false information.

And while it has appeared on blogs, her supposed allegation hasn’t been reported by any credible media outlets. Given the former ambassador’s high profile, such a claim would have made national news.

And in a statement issued on 7 September and reported in several major newspapers, Awolowo-Dosumu dismissed the rumour as “false, mischievous and wicked”.

“I refuse to be dragged into a matter I know nothing about. I advise whoever is behind this wicked lie to make better use of their time for the progress and development of our country, Nigeria.”

As Nigeria’s 2023 elections approach, Africa Check is seeing an increasing number of false online claims about key political figures. This may distort political debate and so reduce voters’ ability to make informed choices.