“Nigeria Government Spends $2 million To import Chinese Doctors and Packages – Ambassador,” reads the headline of a video posted on Facebook on 9 April 2020.

The footage appears to be a news clip about the Chinese team of medical experts and medical supplies that arrived in Abuja, Nigeria’s capital, on 8 April.

It shows Zhou Pingjian, China’s ambassador in Nigeria, being interviewed at Nnamdi Azikiwe International Airport as the medical team and supplies arrived.

“According to the information the CCECC told me, the value of the equipment [and] medical supplies is around US$1.5 million and including the other costs, like the chartered flight, it’s around US$2 million,” he said.

A screenshot of an article circulating on WhatsApp has a similar headline. Seemingly by Pulse, a Nigerian website, it reads: “It cost $2M to bring Chinese doctors, equipment to Nigeria – Ambassador.”

Nigeria has reported 373 confirmed cases of Covid-19, and 11 deaths.

But did its government pay China $2 million (about N770 million) for the medical supplies and team of experts? 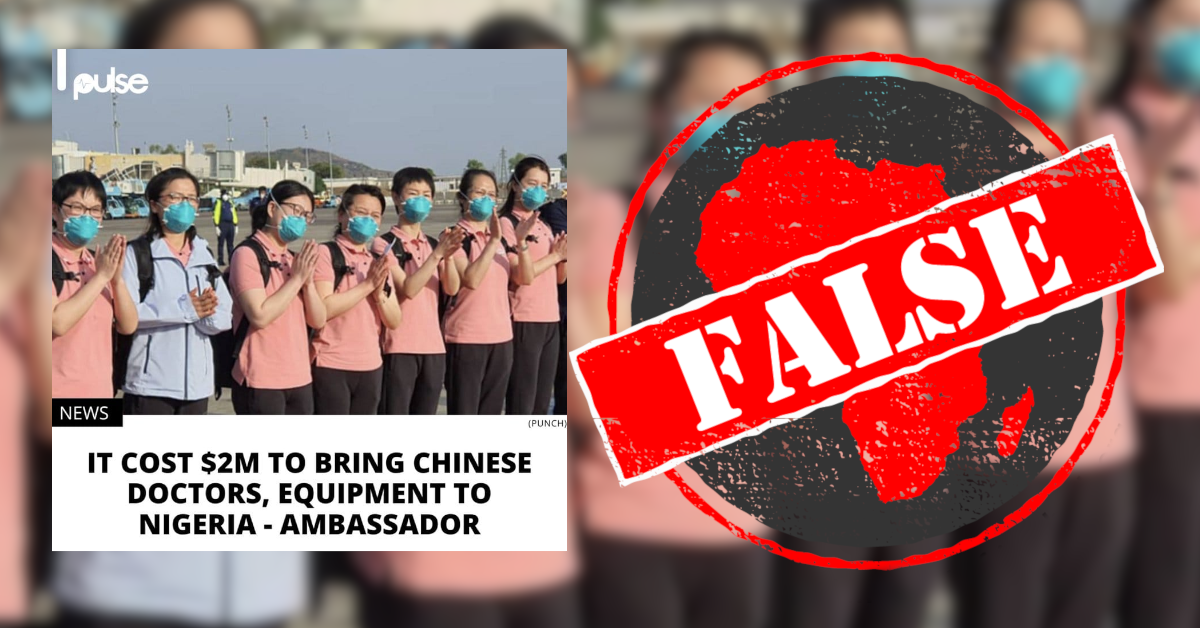 The Chinese ambassador did say how much it cost to deploy the supplies and medical team, but at no point did he say that the Nigerian government paid for them.

Chu Maoming, China’s consul general in Lagos, gave an interview to Nigerian news outlet Vanguard on 14 April. He said that at the request of the Nigerian government, Chinese state-owned company the China Railway Construction Corporation, through its subsidiary the CCECC, collected the batch of medical supplies and dispersed the 15-member technical team of medical experts at its own cost.

“The support and help from the Chinese government and companies was timely, which has effectively relieved Nigeria's urgent need and greatly enhanced its confidence in dealing with the pandemic,” Maoming said.

In his interview in Abuja, Pingjian said that the donation was made to pay Nigeria back for its earlier efforts to help China’s response to Covid-19.

“At the most difficult stage of China’s fighting against Covid-19 we received support of all means from Nigeria. It’s time for us to reciprocate the friendship and kindness,” Pingjian said.

The full Pulse article also reported that the supplies and medical team were a donation paid for by CCECC.

The medical supplies and team of experts from China did cost $2 million to procure and deploy. But the costs were paid by the Chinese government, not by Nigeria. – Naledi Mashishi

‘In search of greener pastures’: Checking five claims about Nigeria’s doctors and the brain drain

A prominent doctor in Nigeria has said thousands of doctors are leaving the country, straining the health sector. We took a closer look.