Dr Oby Ezekwesili, a prominent Nigerian academic and politician who has worked at a high level with the World Bank and Transparency International, says the 2014 Boko Haram kidnapping of 276 school girls in Chibok – and the #BringBackOurGirls campaign to free them – was “planned to tarnish” then-president Goodluck Jonathan’s image.

At least, that’s according to a quote attributed to Ezekwesili, posted on Facebook on 15 May 2021 and then widely shared. But the post is false. Ezekwesili did not say this.

The post shows a photo of Ezekwesili alongside one of Muhammadu Buhari, Nigeria’s current president. Buhari won the 2015 election, ousting Jonathan.

“Be careful when working with Fulani because their intentions are different from what you think,” the quote attributed to Ezekwesili begins. Buhari is Fulani, a widely dispersed group of people who live in many West African countries.

In April 2014, Boko Haram insurgents abducted 276 teenage girls from their dormitory at a school in Chibok, a town in Borno state in Nigeria’s north east zone.

The resulting #BringBackOurGirls campaign was led by Ezekwesili, along with Hadiza Usman, a Nigerian politician. The campaign won support across the world.

The fake quote continues: “I was doing the ‘Bring Back Our Girls’ Project with Hadiza Bala Usman in 2014.”

But it then adds an accusation. “I didn’t know [Usman] was sent to the project by Fulani leaders to tarnish the image of Goodluck Jonathan for Muhammadu Buhari to win an election.”

It adds: “Immediately after the election, she left the project and was given appointments as MD Nigerian Ports Authority (NPA).”

The kicker, at the end of the quote attributed to Ezekwesili, is this: “Now I believe that ‘Chibok Girls Kidnapping’ was planned to tarnish Goodluck Jonathan’s image for Muhammadu Buhari to win election.” 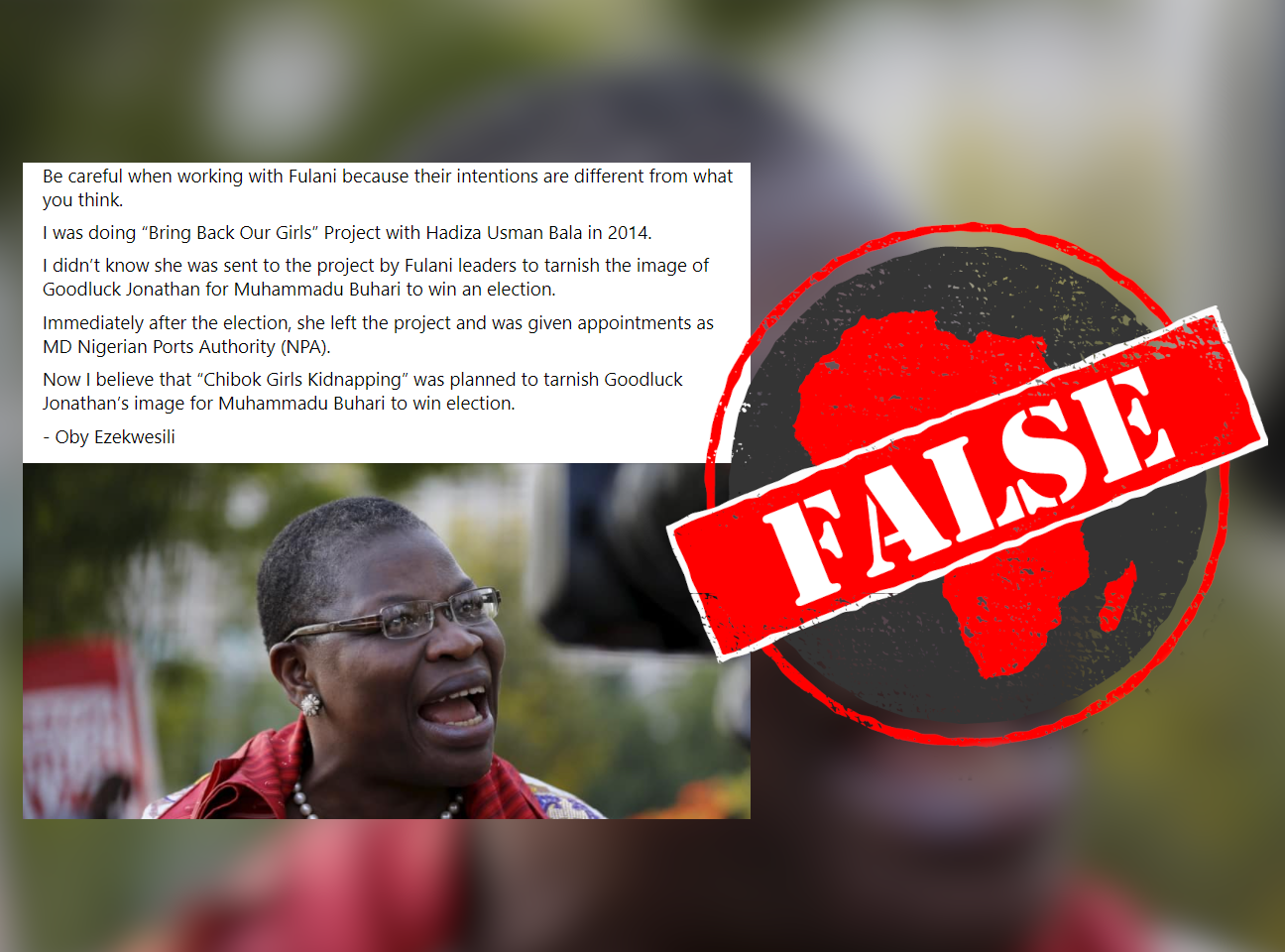 Buhari’s government did eventually appoint Usman as managing director of the Nigerian Ports Authority. But in May 2021, she was suspended from that position.

Africa Check has searched credible Nigerian news outlets for reports of Ezekwesili saying this, and found nothing.

Ozioma Ubabukoh, Ezekwesili’s spokesperson, said in a press statement emailed to Africa Check that the quote was, simply, fake.

“Ezekwesili never said and can never make such egregiously false statements on the empathetic campaign she led for the rescue of the abducted Chibok girls,” the statement reads.

“Ezekwesili has commenced legal actions for libel against media outlets and individuals who publish and disseminate this disgusting fake news that was fabricated by those who wickedly continue to deny the failure of the federal government in 2014 to swiftly respond and rescue Chibok Girls.”

Ubabukoh added that the #BringBackOurGirls campaign was “not a project to tarnish anyone” for political reasons.