Tokyo Sexwale made headlines in South Africa on 19 April 2021 when he claimed in a TV interview that billions had been stolen from a fund intended for free education and welfare grants.

Sexwale, a businessman and veteran of the ruling African National Congress, said the money in the “Heritage Fund” had been donated to South Africa by an unnamed family.

He claimed that both former president Jacob Zuma and current president Cyril Ramaphosa were aware of the fund.

According to a graphic posted on Facebook on 26 April, a preliminary investigation has confirmed Sexwale’s claims that money was fraudulently moved from the South African Reserve Bank, or Sarb, to commercial bank accounts.

The graphic features the logo of Business Maverick, a subsidiary of local journalism outlet Daily Maverick. Above the logo is the headline “Billions moved from Sarb to Banks”.

The text in the graphic says: “In December 2018 through discussions with IPA and Interpol it has been established the following activity has may have occurred with a flow of funds from the WSB accounts listed above to Circa 80 accounts, some a few of which are listed below.”

“The funds transfer to these accounts have not been authorised by the Funds owner, Proxy owner, nor Mandate holder, and therefore it can only be assumed parties have fraudulently accessed these funds in making these transfers.”

The poorly written text – suspicious for a mainstream newspaper outlet – is supplemented with photos of prominent political figures including Ramaphosa, minister of public enterprises Pravin Gordhan and minister of finance Tito Mboweni.

One Facebook user captioned the graphic: “Preliminary investigations shows that there were funds moved from the SA Reserve Bank to Commercial Banks as Tokyo said, Sexwale did not authorise these transfers, meaning there was a syndicate operation moving this huge sums of money.”

But the user doesn’t detail who is meant to have conducted these “preliminary investigations”.

Specialised crime unit the Hawks confirmed on 26 April that they were investigating Sexwale’s claims that R41 quadrillion was stolen from South Africa.

But is the information presented in this graphic evidence that a preliminary investigation showed funds were moved from the reserve bank to commercial banks? We checked. 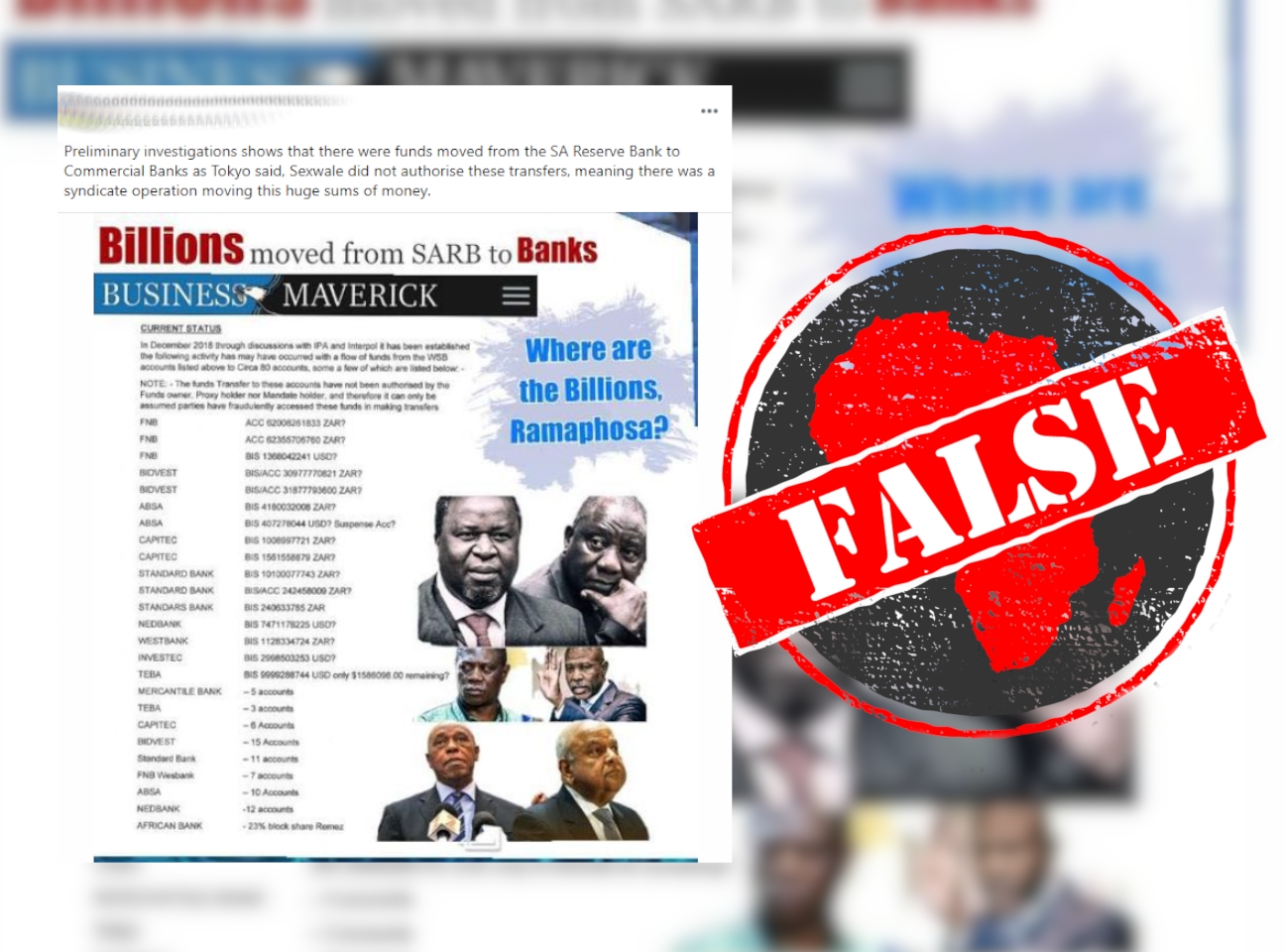 Documents date back to 2016

On 20 April, Business Maverick published an article titled: “He’s got his ticket to ride: Tokyo Sexwale was fooled by a common internet scam.”

The article claims that Sexwale was fooled by a “common scam” involving a Singapore-based trust called “White Spiritual Boy” or WSB, the trust allegedly responsible for what Sexwale called the “Heritage Trust”.

Business Maverick also obtained documents dating back to 2016 that are allegedly from the WSB trust and the basis for Sexwale’s claims.

These include the document in the graphic – but the graphic added additional text and the images of the politicians and is not what was published by Business Maverick.

The document may be from the WSB trust – or the scammers presenting themselves as such – but isn’t evidence that these transactions in fact took place.

The reserve bank said in a statement: “On investigation, the SARB can confirm that it had no record of the existence of the said fund and it had advised Mr Sexwale in writing that, given the SARB’s experience and knowledge of this and other similar matters, it could only conclude that the alleged fund was a scam.”

The reserve bank called on Sexwale to provide independent written documentation and certified identification documents to prove his claims.

We could not find any evidence that a preliminary investigation into Sexwale’s claims has been concluded.

The graphic on social media uses a photoshopped document, the original of which dates back to 2016. While it may be one of the documents that persuaded Sexwale of the legitimacy of the WSB trust, it is not, as far as we could gather, evidence used in any investigation.