No, Pfizer CEO got Covid vaccine – and old video clip out of context

“PFIZER CEO HAS NOT YET HAD VACCINE.”

That’s the all-caps static text at the top of a TikTok video posted on Facebook in South Africa on 14 August 2021.

The footage show 30 seconds of an interview with Albert Bourla, chief executive and chair of US drug company Pfizer. The Pfizer-BioNTech Covid vaccine was developed in partnership with German biotechnology firm BioNTech.

In the video, the interviewer says Bourla has not yet had his vaccine shot, and asks when he plans to get it.

“The sooner I can, I will,” he responds. “The only sensitivity here, Meg, is that I don’t want to give the example that I’m cutting the line. I am 59 years old, in good health, I’m not working in the frontline. So my type is not recommended to get the vaccination.”

The video then cuts to an 11-second clip from the movie iRobot, with actor Will Smith sneezing before saying: “I’m sorry, I’m allergic to bullshit.”

It was posted on Facebook with the comment: “As die CEO van Pfizer nie die shot vat nie!” That’s Afrikaans for: “If the CEO of Pfizer doesn’t take the shot!” The post has been viewed more than 71,000 times in five days, attracting over 4,300 comments and 6,400 shares.

The Pfizer-BioNTech vaccine is one of a number of Covid-19 vaccines – including Johnson & Johnson and Oxford-AstraZeneca – so far approved for use in South Africa by the Health Products Regulatory Authority.

But some South Africans are still hesitant about getting the shot.

What’s the context of the video? And has Pfizer’s CEO not got the shot? 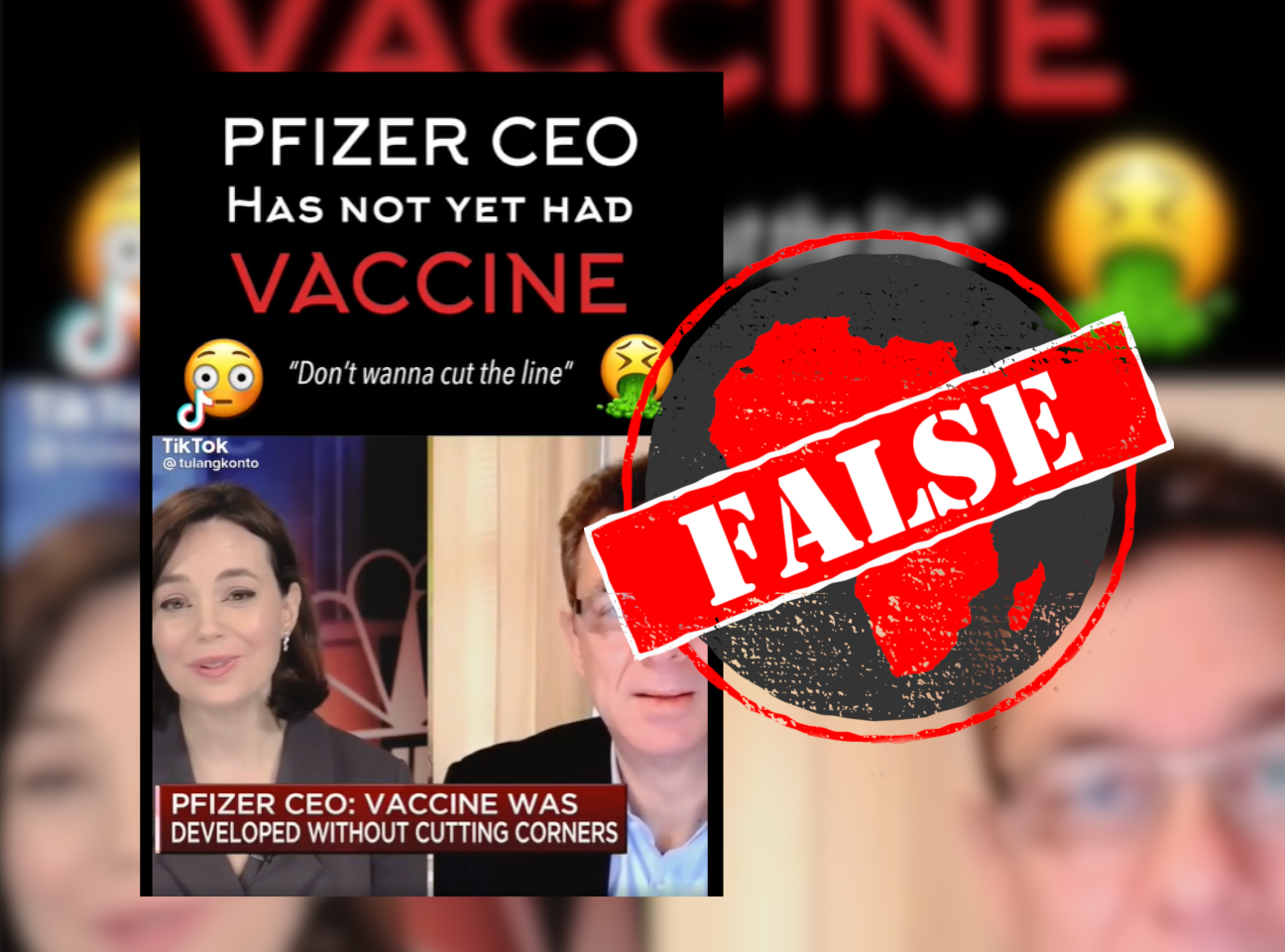 Video from peak of US Covid-19 deaths

The 30-second clip was taken out of context from a three-minute video posted on the website of  US news broadcaster CNBC on 14 December 2020. That was eight months ago, just as the US was receiving its first deliveries of the Pfizer vaccine. It was when the US was in its second – and so far most deadly – wave of the pandemic.

In the December video, Bourla was being interviewed by Meg Tirrell, CNBC’s senior health and science reporter. The video is titled: “Pfizer CEO Albert Bourla on vaccine hesitancy: ‘Trust science’.”

In the full video, Bourla did say he didn’t want to “cut the line” ahead of frontline workers. But he added that a Pfizer poll had indicated that if the company’s CEO took the vaccine, it would give people more confidence than if even a US president got the shot.

“With that in mind, I’m trying to find a way to get the vaccination, despite it not being my time,” Bourla said. “Just to demonstrate the confidence of the company.”

‘I want loved ones to have same opportunity’

Bourla received his second dose of the Pfizer-BioNTech vaccine on 10 March 2021.

Tweeting a photo of getting the shot, he wrote: “Excited to receive my 2nd dose of the Pfizer/BioNTech #COVID19 vaccine. There's nothing I want more than for my loved ones and people around the world to have the same opportunity. Although the journey is far from over, we are working tirelessly to beat the virus.”

Excited to receive my 2nd dose of the Pfizer/BioNTech #COVID19 vaccine. There's nothing I want more than for my loved ones and people around the world to have the same opportunity. Although the journey is far from over, we are working tirelessly to beat the virus. pic.twitter.com/ES05WPBLJA

In an interview with Axios on HBO, a US current affairs programme, Bourla confirmed that he had received both doses of the Pfizer vaccine. He said that he had waited his turn to get the shot and now felt “liberated”.

“There’s nothing I want more than for my loved ones and people around the world to have the same opportunity."